Many members of the Auburn family know that the origins of several of our names and phrases originate with the poem, “The Deserted Village,” by Oliver Goldsmith.  What is probably far less known, however, is the sad set of circumstances that led Goldsmith to write the poem in the first place—just what village was it, and why was it deserted?— or how history and fate took an eerie hand in redressing the situation a few years later.

During the Eighteenth Century, the wealthiest nobles had begun to build manor houses of fabulous size all across the English countryside. (The popular British drama series, “Downton Abbey,” provides a glimpse into the inner workings of one such house, as it nears the end of the manor house era in the early Twentieth Century.)  But what would a gigantic mansion be without equally fantastic grounds and landscaping?  And so much effort was put into creating magnificent sprawling grounds for the manor houses to dominate.

In a few cases, however, even hundreds of acres of manicured lawns and fountains was not enough, and the astoundingly wealthy lords would go so far as to demand the removal of actual towns that lay along the sight lines of the house.  Generally they possessed the wealth and power to force the town and all of its inhabitants to uproot and move away from their traditional locations.  The desire of one wealthy man to not have to see the town in the distance trumped the generational ties of many families to their own land and village.

Thus it was with Simon Harcourt, the first Earl Harcourt, and the town of Nuneham Courtenay in Oxfordshire.  After constructing his palatial estate, Nuneham House, he ordered the dismantling of the town and the removal of its people, so that they wouldn’t spoil his view.  This was done.

Witnessing these events, the poet Oliver Goldsmith wrote his epic “The Deserted Village,” which of course gives us “Sweet Auburn” and “Loveliest Village on the Plains,” as well as describing how “crouching tigers await their hapless prey.”

Anyone who has actually taken the time to read the poem can hardly mistake the tone; it positively drips of resentment and recrimination against those of power and wealth who would so cavalierly treat their fellow man.

Even after you read the poem, however, you probably still don’t know the rest of the story.  What, exactly, became of the first Earl of Harcourt, after he had the Loveliest Village bulldozed to the ground?

He went for a walk around the property, failed to note where the town’s well had been located, fell into it, and drowned.

The Revenge of Sweet Auburn, indeed. 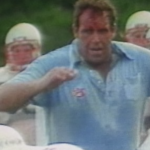