Before the 2011 season, I was like, “man, there aren’t that many Auburn fans that know what this feels like—defending a national championship.” And so off to the library I went, microfiching for the emotions and T-shirts and hopes and dreams of the 1958 Auburn fan. Now, just over a year later, I’m one overtime win against Louisiana Monroe away from digging back through 1950, the Year Who Shall Not Be Counted. But if you’re a fan of parallels, then 1952 is the year you want when comparing 2012—the worst start in 60 years, the worst start in 60 years, not since Shug’s second year, not since Shug’s second year, tweet, tweet, tweet—to the great winless columns throughout Auburn history, anyway.

Because in 1950, no one expected anything, not from a team that had won only two games the previous season. And no one got anything. Not a single win. But in 1951, Auburn fans had seen the coming. Going into 1952, they were all in.

In 1951, Shug Jordan had taken Earl Brown’s 0-10 losers and turned them into not losers: 5-5—in his first year. For fans of a team that had lost to freaking Wofford the season before, that might as well have been a national championship. Which is why 1952 must have sucked: A 1-7 start and a 2-8 finish, the first win coming in the third game against Louisiana Monroe, I mean, Wofford, the second against a Clemson team that probably sucked even worse than we did, and thanks only to one of the greatest plays Shug had ever seen: Vince Dooley managed to snag a ridiculously ugly snap so Auburn could kick a field goal.

So what was the mood of Auburn folk at this point in the 1952 season, at least calendar-wise (in late October, Auburn was coming off only its fourth loss in five games, rather than its sixth)? Were they questioning the faith of their fellow fans? Questioning the wisdom of Athletic Director Jeff Beard in hiring his old friend? Was Shug’s BarcaLounger heating up?

In the first of several forthcoming 1952 related posts, we turn to 1952 Plainsman columnist War Eagle for answers.

Two weeks later, after a loss to Florida and a homecoming loss to Mississippi State wilted Auburn’s record to 1-6, the Plainsman published an anonymous letter from a 1950 graduate includes a line that makes me want to write a book just so I can use it as a title: “The flaming student spirit of that defeat-studded ’50 season was something to see…” 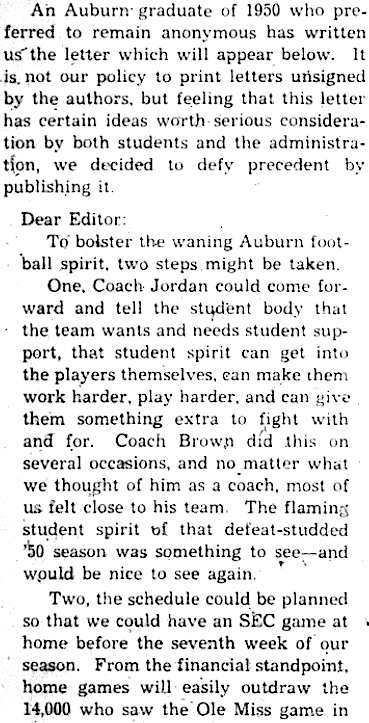 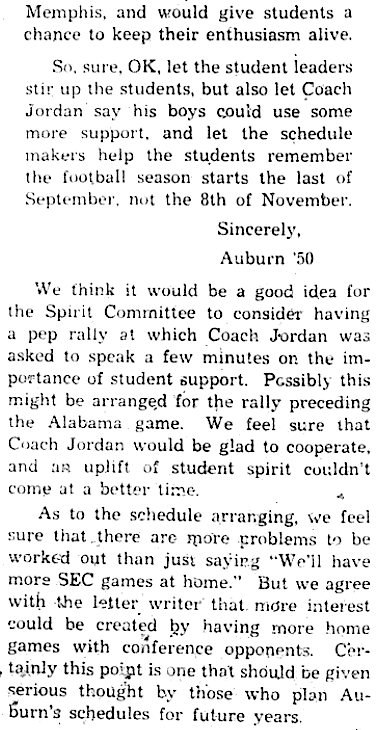 Related: How the city of Auburn reacted when Auburn’s first national champions’ win streak came to an end.