You will never run or throw or win championships like Cam Newton. But you’ll soon be able to dress like him.

On Monday, the Blessed Individual announced he is working on his own men’s clothing collection—MADE Cam Newton—with Charlotte-based department store Belk.

“They did an unbelievable job with taking my ideas… and my style and just making it a brand,” Newton said yesterday during a media event announcing the line in Charlotte. 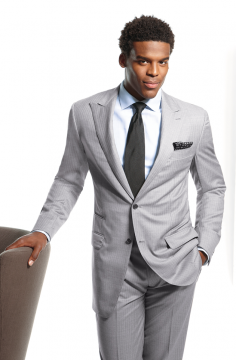 “Professional sports play an increasingly important role in fashion, and as a fashion retailer, Belk is excited to be at the forefront of the trend through this brand,” says Kathryn Bufano, president and merchandising officer for Belk. “Cam Newton personifies our company’s dedication to family, community and the Southern lifestyle, and therefore is a perfect complement to Belk’s modern Southern fashions.” 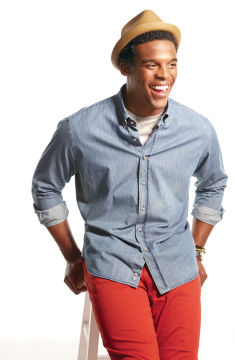 “As a man born and raised in the south, I have always known Belk as a benchmark for quality apparel and a destination for clothing that is both functional and stylish. Developing a collection for Belk was a natural fit from the beginning, and we designed the MADE collection with an authentic approach,” said Newton. “I’m happy to bring my vision to a clothing line that provides comfortable, on-trend clothing to men and that reflects my personal style.”

“MADE Cam Newton is positioned among Belk’s 20 private brands which seek to satisfy the modern Southern lifestyle of our customers,” said John Thomas, Belk executive vice president, private brands. “We are thrilled to be able to partner with one of today’s emerging style icons.”

Though currently limited to men’s clothing and accessories, Belk president Kathryn Bufano said the line could expand to include children’s clothing—yes!—and women’s watches.

When the Charlotte Observer asked him if he was ready to call himself a full-fledged designer,  Newton replied “The competitor in me wants to say yes, but I’m going to say no.”