I didn’t think I’d be able to get a Relics in this week due to a bit of travel and general real world obligations, but my fear of the post turning into a relic itself the minute I stop cranking them out spurred me into action at the 11th hour.  It will be a bit of an abbreviated edition, but there were a few pieces sent in the last couple of days that I just felt like sharing with everyone on this pre-LSU Friday afternoon.

Speaking of the game, I know things having been going great so far this season and I’m not here to pump sunshine and tell you everything is going to be alright. But I will ask that if you’re going to be in that stadium tomorrow, please don’t walk in there already defeated. I’ve seen far too much of that this week from many Auburn fans.  I get it, but come Saturday it is time to buy in again. Use every bit of the precious tailgating time that a night game affords to psych yourself up for the improbable. Save the realism for later. Convince those around you to do the same. Yell really loudly when LSU has the ball. Turn the one assumed advantage we have, Jordan-Hare at night, into a realized one. Crazy things happen in college football. Believe, because it’s a lot more fun than the alternative. 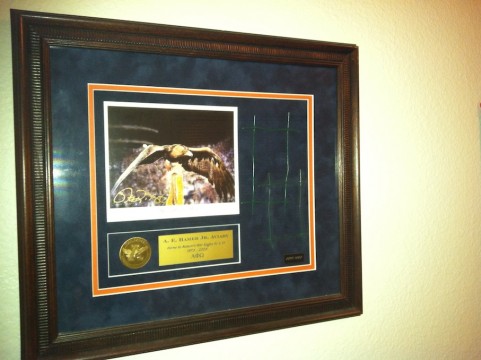 “This is a piece of the old eagle’s cage that used to be in front of Jordan-Hare.  Pieces were being sold as collector’s items while I was in college and I had this given to me as a gift.  It has since hung somewhere prominent in every place that I have lived in around the country.”

The eagle cage used to be a landmark on campus when I was in school.  I’d pass it every day on my way to and from class and would usually stop to check in on Tiger. I’d also meet friends there after class back when you had to pre-coordinate meeting locations because we were still a few years off from everyone having cell phones. I was kind of sad to see it go when they finally did take it down, but in all honesty that part of the concourse looks much better now and the bird is probably happier having a little privacy. So all in all it was a good move, and it made for some cool souvenirs at the same time. 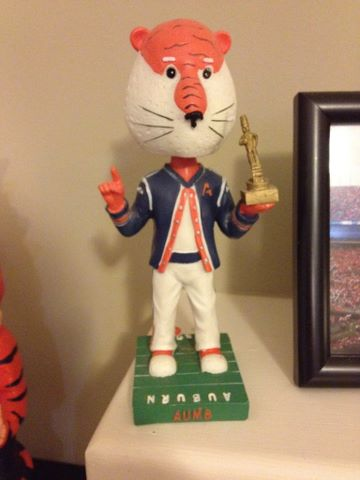 “Wearing a band uniform with the Band A logo. It’s holding the Sudler trophy, from the year the AUMB won it.”

I saw this bobblehead in the background of a picture that @trueparallels tweeted to me of the Auburn elf goblin statue from last week’s post and asked if he could send me a picture of it by itself. He graciously obliged.  Love seeing Aubie in the band uniforms holding the Sudler Trophy. For those who do not know, here is a little background on the award which is probably best summed up by the words “the Heisman Trophy of the collegiate band world”:

The Sudler Trophy is an award bestowed on one university marching band every other year, and was an annual award from 1982–2007. Described by a Los Angeles Times reporter as “[t]he Heisman Trophy of the collegiate band world”,[8] the award does not represent the winner of any championship, but rather a band surrounded by great tradition that has become respected nationally. No school may be honored with the award twice. According to the official description of the trophy: 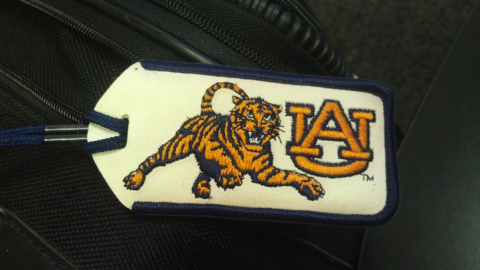 “On my carry-on bag, can’t let airline lose it!”

Smart move to keep this on the carry-on only, though it would make any bag stand out on the carousel.  The only way this would be better is if the bag it hung from was… 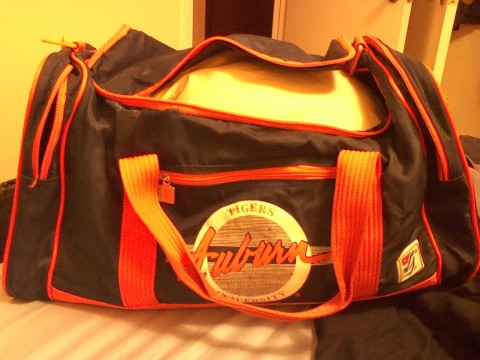 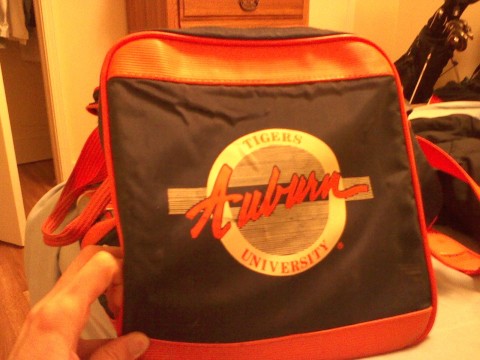 “I love the War Eagle Relics segment on the War Eagle Reader, and I’ve wanted to submit something, but didn’t think I had anything interesting. Then, I remembered this little gem. This is an old duffel bag that’s been floating around my family for more than two decades. It was my older brother’s for a long time (class of ’97), and I took it over sometime in the mid- to late-nineties. I still use it from time to time. No idea exactly when it was purchased or where, but it’s definitely got a late ’80s/early ’90s feel. Not sure my phone’s camera did the colors justice.”

I think Garon accurately nailed the time frame for this bag as that style was very popular for a period around 1990. My very first Auburn hat ever was a gift given to me by a friend that used the circle logo from this bag. As a random aside, there is a scene in the movie Days of Thunder that has the great Robert Duvall wearing both a Georgia hat and a Florida hat in this style thanks to some poor continuity editing.

That’ll do it for this week (as I said, a little abbreviated). If you have something you’d like to share, please email me at [email protected]. To check out past editions, click here.