Editor’s note: Each week this football season, Auburn University Journalism Instructor and The Auburn Plainsman Adviser Austin Phillips will break down the greatest games against that week’s opponent or notable games in that week’s history (for previous weeks, go here) Break it down, Austin 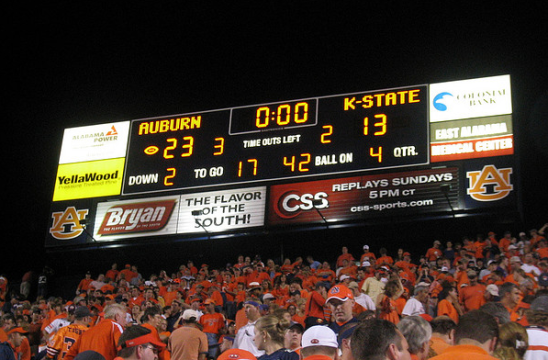 Perhaps Green Day knew something when they wrote “Wake Me Up When September Ends.” Reeling off two consecutive losses to open the 2012 campaign, the Auburn Tigers will look to get back on track this week against the University of Louisiana at Monroe. Despite owning an 8-0 lead in the series that began in 1994 (including three wins against the Warhawks when they were known as Northeast Louisiana), only one game has even been close (in 1996, the Tigers rallied to defeat NEL 28-24). Although ULM is no cupcake this year after coming off a thrilling overtime victory in Fayetteville, Ark. over then No. 8 Arkansas, this week’s greatest games will focus on some of the most thrilling September games against non-conference opponents.

After a 2-0 start to the 1991 season, the Tigers hit the road to Austin, Texas, for a made-for-TV showdown on ABC with the Texas Longhorns. The Tigers struck early on a three-play, 49-second drive when quarterback Stan White connected with Victor Hall from 25 yards out in the first minute of the game to take a 7-0 lead. Corey Barlow intercepted Texas quarterback Peter Gardere late in the opening quarter for Auburn’s first of three picks in the game and returned it 29 yards for the score to put the Tigers up 14-0, and they never looked back. Longhorn reserve quarterback Jimmy Saxton got Texas on the board in the second quarter on a 17-yard run, and kicker Jason Ziegler hit his first field goal of the game in the fourth quarter after missing his previous two kicks, but it was too little too late. The Tigers’ offense received a huge boost when Texas defenseman Shane Dronett was ejected in the opening half after jumping the snap, and the center, and hitting White for a personal foul.

You can watch the glorious Auburn Football Review of the game in its entirety here.

“Body language says so much in football to what’s happening right now. It could change in one snap, though. Rudi Johnson! Rudi Johnson! RUDI JOHNSON! RUDI JOHNSON! TOUCHDOWN, WHAT A RUN!” That was the famous call from ESPN’s Mike Tirico as the transfer running back introduced himself to Auburn fans, and the world, with his spectacular 70-yard touchdown run in which he broke five tackles and then carried an additional three Cowboy players into the end zone for the YouTube highlight reel with less than four minutes remaining in the game. The Tigers dominated most of the game behind Johnson’s 174-yard effort on 27 carries, but the Cowboys made it a game in the fourth quarter on two touchdown strikes from quarterback Jay Stoner to Ryan McGuffey. However, following Stoner’s second TD strike and holding just a 28-21 lead, Johnson answered on the second play of the ensuing drive to seal the victory for the Tigers.

Freshman Wes Byrum burst onto the scene in his first collegiate start with three field goals, but it was the Auburn defense that got all the fame in the 2007 season-opening victory over the Big 12 Wildcats from Kansas. Byrum gave the Tigers a 6-3 halftime lead over KSU with two field goals in the second quarter, but the third quarter belonged to the Wildcats as Leon Patton hauled in a 21-yard touchdown pass from Jordy Nelson and Brooks Rossman nailed a 40-yard field goal to give KSU a 13-6 lead. Byrum pulled the game to 13-9 with a late third-quarter field goal, and the final quarter belonged to the Tigers. Brandon Cox hit defensive-convert Gabe McKenzie on a 3-yard screen with two minutes remaining in the game to give the Tigers a 16-13 lead before Quentin Groves sacked KSU quarterback Josh Freeman with just over one minute remaining and Antonio Coleman picked it up and returned it 34 yards for the score. Chris Evans picked off Freeman’s final pass on the ensuing drive to put an exclamation point on the Tigers’ victory.

Rain, rain, go away, and take the monsoon with you. The rain, and the lightning, may have delayed the game and flooded much of Jordan-Hare Stadium (but not Pat Dye Field), but it only strengthened the resolve of the Auburn students. Things didn’t look promising in the first quarter, with West Virginia opening a 21-10 lead, but the Tigers wouldn’t quit. Mother Nature may have slowed the Tigers, but she couldn’t keep them down. Mountaineer running back Noel Devine stunned the home crowd with touchdown runs of 1 and 71 yards in the first four minutes of the game, but Wes Byrum’s leg and Chris Todd’s arm got the crowd back into the game as Byrum connected on a 46-yard field goal and Todd connected with Darvin Adams from 16 yards out to cut the score to 14-10. West Virginia wasn’t through scoring early, however, as Jarrett Brown connected with Jock Sanders from 6 yards out to give the Mountaineers a dominating 21-10 first-quarter lead. In the second quarter, it was all Auburn as Byrum hit from 42 yards out and Todd once again connected with Adams to cut the once big lead down to 1. Devine put the Mounties back on top in the second half on a 12-yard run, but Mario Fannin answered two plays later when he took a Todd screen pass 82 yards to the house to tie the game 27-27. Tyler Bitancurt once again gave WVU hope with a 28-yard field goal late in the third quarter, but the final quarter belonged to the Tigers. Adams hauled in his third touchdown of the game with just 12:07 remaining before Craig Stevens picked off a Brown pass and returned it 15 yards for the score to seal the win, 41-30. The AU student section has perhaps never been as influential as they were that September night.

Yeah, it wasn’t the biggest victory, but it could have been the biggest loss. Plus, you can’t get much more exciting than the final minutes of Auburn’s 42-38 victory over the Utah State Aggies. Entering the game as the defending national champion with a 15-game win streak, the Tigers seemingly had everything to lose and nothing to gain by playing the Aggies. However, Utah State had nothing to lose and everything to gain, and it showed. Trailing by 10 with less than four minutes remaining, all hope seemed lost for the Tigers, that is unless you were wearing blue and standing on the turf of Pat Dye Field. With 3:38 remaining in the game, the Tigers drove 65 yards on six plays and pulled to within three on a 15-yard touchdown strike from Barrett Trotter to Philip Lutzenkirchen. On the ensuing kickoff, the Tigers pulled off a miraculous onside kick when Emory Blake jumped up to catch the high Cody Parkey bounce to give Auburn once last chance. The Tigers took advantage of the opportunity, driving 56 yards on eight plays when Mike Dyer powered his way into the end zone for the game-winning score with 30 seconds remaining. While the game ended on a positive note for the Tigers, it didn’t start out that way. Utah State opened a 21-7 second-quarter lead before Tre Mason got Auburn back into the game on a 97-yard kickoff return for a touchdown. The Tigers dominated the third quarter, taking a 28-24 lead, before the Aggies scored back-to-back touchdowns in the fourth to set up the unbelievable comeback. The last-second victory was the first of two-in-a-row as the Tigers survived another heart-stopper the following week by stuffing Mississippi State at the 1-inch line to survive 41-34.

You’re not going to read about many “great” losses in this column this season, but this game was different. After taking a week off following the Sept. 11 attacks, the Tigers traveled to New York for the first college game in the state since the attacks. Dwight Freeney spent more time in the AU backfield than Jason Campbell did, but the game signaled a return to normalcy for our country.

It took a late touchdown pass from Ben Leard to Ronney Daniels, who leaped over an App. State defender in the back of the end zone, to seal the victory. Leard declared after the game, “We’re back!” He was one year premature on his forecast.

Dameyune Craig torched the Cavalier defense to open up the 1997 season in Charlottesville, Va. Auburn’s opening victory on the road was a huge catapult to the Tigers’ first trip to the SEC Championship game in Atlanta as the Western Division champions.

The Perfect Tigers nearly blew a 21-7 halftime lead, but managed to hang on in this early-season thriller which was witnessed by 17 members of the Bowden family, including coaches on both teams and Florida State head coach Bobby, who was enjoying an off week.

The Amazin’s avoided a close call early in the season to a less than formidable opponent.

Auburn began the 1963 campaign on the road at Houston, and then followed up the close victory with another victory on the road in Knoxville, Tenn. The ’63 team reeled off six victories in a row before falling to Mississippi State 13-10 in the only regular-season loss.