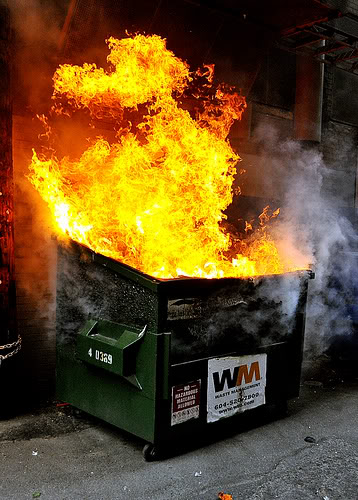 In 2003 Auburn started 0-2 after getting shut out by USC and then playing horribly in a loss at Georgia Tech.  It was incredibly frustrating to Auburn fans because the 2002 offense had shown so much promise, and Auburn returned Jason Campbell, Carnell Williams, Ronnie Brown, etc.  Everyone who watched football KNEW the offense should be better than it was performing.   In 2012 Auburn is again 0-2.  But how good is this offense?

Ten Things That Contributed to the Debacle in Starkville

In this atrocious dumpster-fire of a game, worthy of the best efforts of 2008 or 1998, Auburn’s players and/or coaches:

1. Again insisted on spending far too many plays trying to run McCalebb into the D-line like a standard tailback.  McCalebb is an excellent difference maker for Auburn, but he is a limited player.  Running him between the tackles is almost always a wasted play, and this offense cannot afford wasted plays.   Additionally, the sweeps and screens to McCalebb are pretty predictable the way Auburn sets them up.  Unlike the 2010 Auburn defense, most SEC teams can stop the little wide receiver screen on the outside.  McCalebb needs to be used more creatively or used primarily as a decoy for Auburn to have success.  (McCalebb had a net 4 yards rushing on eight carries and had one catch for seven yards.) Those carries need to go to Tre Mason.     One more word about McCalebb: most of his touches were on perimeter plays and the blocking on those plays by the receivers was the worst by that position since 2008 at least.  (We will get to Frazier soon enough, but there were a couple of plays where Frazier did the right thing and the Auburn receivers were completely whiffing on blocks.)

2. Continued to forget how to tackle.  Yes, the defense played better than it did against Clemson (at least while the game was in doubt and before the Auburn offense completely failed them).  But once again there were too many plays where an Auburn defender had a hand on the offensive player and he got away and gained additional yardage.  How about this as a goal?  We want Auburn to get some ‘piling on’ penalties in the next few weeks because all eleven defensive players are on top of the ball carrier at the end of the play – that would be better than what we are doing now.

3. Seemingly forgot that Tre Mason did not run out of eligibility after the Clemson game.  And seemed to believe that Mike Blakeley is only allowed to carry the ball four or five times a game.   Here is the carry breakdown for the game – Blakely (11 carries for 42 yards) Mason (8 carries for 25 yards) and McCalebb (8 carries for 4 net yards.)  Frazier had 11 “rushes” for net 22 yards, but only 3-4 of those were designed runs.     If we count the plays were Auburn tried to pass as pass attempts, the game plan was 35 rushes, 29 passes.  (Note to our new OC – that’s too many pass attempts for a young quarterback making his first road start).

Here is the recipe for Auburn’s offense from here on:  I-formation with Prosch in front of Mason, two tight ends and Blake.  Run the ball 75- 90% of the time.  Forget balance.   When teams are putting eleven guys in the box then we can talk about play action.

4. Allowed Emory Blake to be removed from the offense almost the entire game.   We said this in the Wishbone preview – Banks could take Blake out of the game and Frazier needed to look for other receivers.   We are only simple columnists but if we knew this how did it seem like our starting quarterback and offensive play-caller did not??

5. Continued to overthrow a wide-open Lutzenkirchen.     Auburn’s tight ends totaled 2 catches for 12 yards – both to Lutz.  He was open on other plays and Frazier could not get him the ball.  Auburn failed to find any other receivers who could catch or otherwise advance the ball.  But Auburn MUST target the tight ends more.

6. Made certain to stay a safe distance away from MSU receivers while they were attempting to catch touchdowns.  Once again the Auburn defensive backs played well off of the receivers, allowing them to get off the line cleanly and get open.   (Just a thought…. if a defense had two defensive ends who were going to get quickly to the area where the quarterback was standing, perhaps the defensive backs should play more press coverage so that the quarterback does not have an easy throw in the three seconds he has available?)

7. Had no second option when Frazier started melting down.  At the most important position on the field Auburn is one deep.  It is clear that Frazier is the guy and that is it.  Loeffler was brought in as a ‘quarterback development guru’ but Frazier looked completely lost and unsettled on Saturday afternoon.  And the play calls did not help him.  He is a very young, talented quarterback and we need to spoon feed him some nice easy routes while we run the ball 50 times per game.  Anything other than that is a recipe for failure at this point.   Frazier can and will get better but it is clear after Saturday that he is it at quarterback.  There are many simple, short pass plays that can be used to help a struggling quarterback.  And yes, we want to be a ‘play-action’ team, but starting the play with his back to the defense isn’t helping Frazier right now – he needs to see the defense, focus on one half of the field (hint hint – the one away from Banks in this case) and then have a nice short slant or curl from the wide receiver on that side.

8. Gave up in the second half.  By not changing quarterbacks Auburn basically said “we surrender.”  Those 3rd and 13 quarterback runs up the middle in the second half?  That is the old familiar ‘surrender’ draw play.   So the choice being made is clear – Frazier’s long term development over winning last Saturday.  (We are not saying that Mosley or Wallace would have come in and won the game – they probably would not have.  But they certainly could not have played any worse – and the coaches could have stood on the sideline and talked to Frazier about what was happening in the game.)

By how many points will Auburn be an underdog to the mighty War Hawks of Louisiana-Monroe (Van’s wife was convinced last Saturday that the announcer was calling them the “Wart Hogs,”) who just defeated a top ten team and, if they defeat Auburn, will climb up to fourth in the SEC West?  (For the record Auburn is a 17 point favorite.  Which is funny.)

Did the Utah State game scare you last year after it was underway?  Then you may want to bring some Tums to this game.  UL-Monroe is a good team with a dangerous quarterback.  They play a funky 3-3-5 defense and their quarterback had 481 yards of offense. And they went into Little Rock and punched Arkansas in the mouth, repeatedly being more physical than the Razorbacks.    Yes, Arkansas was winning when its quarterback got hurt, but the defense still got torched.

Keys to the Game:

1. Auburn needs to come out with confidence and have some early success on offense. Whatever safe, high percentage plays we have that Frazier is comfortable with they need to run them early in the game.  Other than that – line up and hammer them with the running game.

2. The Auburn defense is going to give up a lot of yards on Saturday.  Prepare yourself for it.  UL-M will line up with 4 receivers and Auburn will play well off of them most of the time.  The quarterback is experienced and runs well.  He can scramble in the pocket to buy time and run forward for first downs.  Like the Utah State offense last year, they are going to move the ball and drive you crazy.   Auburn needs to play good red zone defense and hold them to field goals.  If we can run the ball and limit their possessions that will help.

3. Auburn’s special teams can help here.  UL-M’s weaknesses?  Punting and punt coverage. Kickoff returns.  Kick coverage.   Auburn should have a huge edge in this area and should use it.

Were we negative in the points above? Yes.  Most of them were written late Saturday night and early Sunday while the bitter taste of Starkville was still in our mouths.  This column means that we are unhappy (like all Auburn fans) and want to see the team win.  It doesn’t mean that we endorse or support any of the knee-jerk stupidity that is making the rounds on the internet.

Finally, Auburn is playing at home for the first time this season.  The home crowd at Jordan-Hare should be a gigantic lift to this team.  SHOULD BE.   This crowd needs to be vocal, supportive and not wait for the team to do something good before cheering for them.  If you are going to the game and want the team to win and play well, don’t wait for a great play – cheer loudly and often from the start.  Sitting on your hands and grousing about the offense isn’t going to help. Auburn fans can help this team get back on their feet again and moving in the right direction.

(Welcome to the SEC, boys. You hung in there for a while, but…)

(It was fun while it lasted, Vandy. And—Arkansas? Good heavens.  Thanks for making all Auburn fans realize on Saturday that, as bad as things are, they could be a whole lot worse.)

Related: Shug—”The cowbells have no place in football.”