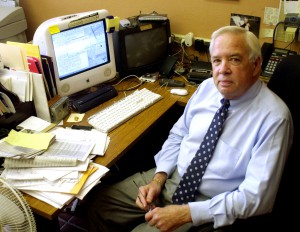 To learn that Paul Davis had passed away certainly caused sadness to many who love journalism and appreciate its rich history in Alabama.  Those of us who knew him were bummed too.

The basics: Paul died Sunday after a brief illness. He was 74 and had been in declining health for some time.  The sad news brings to an end a newspaper career that will not be replicated — not because of the changing nature of the industry, but because Paul represented a generation of journalists whose fire and advocacy seems a lost flame today.

There are those who knew Paul better than me, and the Alabama Press Association’s obituary has great detail on his career.  But I will do my best to remember the man as I knew him.  Maybe others can fill in the blanks in the comments section.  Here is what I admire and remember most about Paul:

1. At the age of 25, he was there when Gov. Wallace stood in the door of Foster Auditorium, refusing to allow African-American students to enroll at the University of Alabama.  When Deputy Attorney General Nicholas Katzenbach arrived with the Alabama National Guard, he met privately with Wallace.  Only one journalist would be allowed to report on the meeting, and Paul’s name was drawn.  He even came away with a photo of him with Katzenbach and Wallace.  Not surprisingly, I could not find the photo on the Internet.  (Getting it scanned is definitely on my to-do list.)  But I use him as an example to my students of someone who was not intimidated by the weight of a historic moment, even early in his career.

2. Paul’s crusade in the late 1960s uncovering mistreatment of mentally handicapped kids and mentally ill adults at state hospitals represents the best of journalism — advocating for those unable to speak for themselves.  His work in the Tuscaloosa News was nominated for the Pulitzer Prize, and though his it was not selected, the rewards of having federal courts intervene on behalf of the patients was far greater.  Eventually, he would be appointed to the state Department of Mental Health Board of Directors.

3. I met Paul in 1977.  He had purchased the Auburn Bulletin from the Neil Davis family, and the Bulletin had been awarded the printing contact for The Auburn Plainsman.  We certainly made life miserable for Paul’s production crew, which included his son Allen, who is now an executive with Media General.  Well, maybe our damage was limited to Wednesday nights. The old print shop is now The Hound’s.  I visited the building for the first time in 2003, when it was the Auburn Ale House.  Heavy deja vu walking up and down those stairs. Thank goodness the ink smell was gone.

4. From then on, these past nine years, Paul enjoyed his “lion in winter” phase.  He continued to publish the Tuskegee News.  After Tallassee News Publisher Jack Venable passed away, his family accepted Paul’s bid to purchase the newspaper, wishing it to be sold to someone who believed in community journalism.  His columns continued, and while his conclusions might have irked many, his reporting was spot-on.

Appropriately, Paul was a frequent visitor to our Friday morning breakfast group. It had started as a book discussion group by Neil Davis at The Grille.  Before I started attending, apparently a roof tile fell on Paul one morning, sparking conspiracy theories. As his health began to fail, his visits became less frequent, but he was always on our minds, and in our prayers when word came that he was not doing well.

A few weeks ago, I was at Golden Corral with a friend.  Paul and his wife, Gayle, were there with one of his sons, and he insisted that we join them.  He seemed tired — the edge of his wit did not have me backpedaling, as it usually did — but he was enjoying the meal.  I did not know it would be the last time I would interact with Paul.  Now, I feel blessed that it was granted me.

I’m glad to be a faculty member of the journalism program at Auburn.  Maybe we have the next Paul Davis among our current or future students, or maybe even among our alumni.  But for now, I’m grateful for the work and the example of the original.