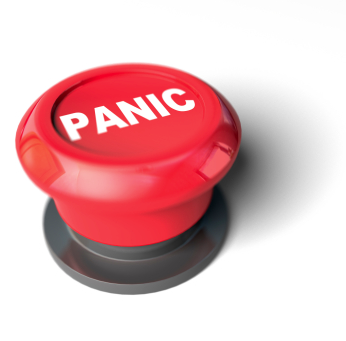 So tempting.  That red, candy-like button.  Want to push, want to…

Don’t you do it.  All is not lost.  The fat lady is not singing and chicken little is not yelling.  Lets pick up the puzzle pieces and see what we’ve got.

2003 comparisons:  People everywhere are comparing this team to the 2003 team who started 0-2.  That team finished with eight wins and a bowl win over Wisconsin.  I think most if not all Auburn fans would take eight wins to the bank right now, no questions asked.  The 2003 team started No. 6 in the country. This years team was either unranked or No. 25. The 2003 team was obviously a bigger disappointment.  They started with a similarly tough schedule and a similarly inept offense.  That team needed Week 3 to get back on track. So does this team.

Clemson could be the real deal. Their offense will win them a lot of games and they have an outstanding quarterback and running back combo and a very good wide receiver corps which will get even better this week with the addition of Sammy Watkins.  Auburn was in that game and could have won with a little luck. On the other side of the honesty coin Clemson could have blown us out without all those dropped passes.

Mississippi State? Also solid.  All we heard last week was how they were ready for this game, circled calendars and all. Well, they were. And it showed. State was fired up, we were not.  We should all realize that Auburn ran into a buzz saw in Starkville and stop discounting them just because they are Mississippi state.  We have played two quarterbacks who were incredibly accurate and magically completed passes with D-lineman hanging on them.  If both these teams continue to play that way they will both win a lot of games. Clemson should win 11; State probably 9.  Fans absolutely hate it, but this is the reason you open the season at home against a cupcake. Breaking in a new QB and two new coordinators? Yep, it would have been nice to open the season in Jordan-Hare against a doormat.  Because when Auburn is breaking in a new QB, the initial, opening game results have been miserable, and history is my proof.  Here is Auburn’s recent results with a first year starter at QB:

Any season opener vs. a team with a pulse, we lost, and we struggled with most of the cupcakes.

The Offense:  Inept is probably a good word for it, but keep in mind that this is a whole new offense. Full disclosure: I have never been sold on Frazier.  I don’t see IT in his eyes.  In the Clemson game he looked scared to death.  Will he get better?  I hope so, but the IT factor doesn’t appear to be there.

But going back to the 2003 comparisons he may not have to have it. Frazier just has to do his best Trent Dilfer impersonation—hand the ball off and not screw up (is that analogy too old now?).  The rest of the offense has actually looked solid to me.  I think Blakely should be our starting back with Mason spelling him and McCalleb as a utility guy.   Oh, and where is Corey Grant?  I think with those three getting the lion’s share and the fact we have been losing has kept him from getting playing time. Prosch looks like what we expected, and I wish we had used him more Saturday. The receivers are getting open, but unfortunately we don’t really know what we have because our quarterback hasn’t gotten them the ball.  The O-line is what I expected them to be.  When pressure is put on, Frazier he has struggled.  I think Louisiana-Monroe is just what the doctor ordered for this offense to get some rhythm and for Frazier to get some confidence.  Don’t be scared because they beat Arkansas, and don’t overreact when Auburn beats them by 3 or 4 touchdowns, either.

The Defense:  Tackling has been poor, obviously; we aren’t wrapping up, we’re not holding on.  I made the comment last week that when I played you looked the guy in the face and held on till help got there, and a friend said no: “You hold on till the ref taps you on the helmet and tells you the play is over”.  A trend in football has been to grab someone and throw him down and Auburn is no exception.  We don’t see the swarming defense we used to have and thought we would have again.  The weakness is at linebacker and it makes everyone else look worse.  When the linebackers aren’t flying to the support of the defensive line, the defensive line looks bad.  When the secondary has to come up and support the linebackers, the secondary looks bad.  When you see running backs coming through the line and getting positive yards, its not the DL’s fault if a LB isn’t there.  This is a weakness we knew we had. And we hope it improves.

Also keep in mind that our D is struggling with the same thing the struggled with last year— the offense not getting a first down and putting them right back on the field, tired.  Again, give Clemson and MSU some credit for playing very, very well.  I’m not worried about the defense. Once the offense gets a rhythm and starts successfully running the ball and getting the play action game working, the defense will look much, much better.

The Future:  La.-Monroe converted 6 of 7 4th downs, and their last 3 TDs were all on 4th down.  Arkansas’s last first down in regulation was with nine minutes to go in the 3rd quarter.  They lost their quarterback and their best player on defense.  While it adds a level of excitement to the game that Auburn definitely didn’t want, the chances of Monroe upsetting Auburn are slim. Lightning doesn’t usually strike in back to back weeks for the same team.  That game obviously has Auburn aware of the dangers of the Warhawks, who are probably still celebrating beating the piggies as I type.  Auburn is a 17 ½ point favorite and should win very comfortably. In our first home game of the year, we should look like a much better football team . LSU has yet to be tested and will likely waltz into Jordan-Hare over-confident, expecting to wipe destroy us.  I’m not calling for the upset, but we always play the Geaux Tigers tough at our place and this year won’t be the exception.  Arkansas will likely be without Tyler Wilson for the game here and looks like even more of a train wreck than we do.  Our D-line should manhandle their O-line and we should be able to move the ball easily.  Again, home field will make a big difference in that game.  So we’re likely looking at 2-3 for September and building confidence and experience.  Frazier can’t get worse (and won’t be playing if he stays the same), and the defense can only get better.  So don’t lose hope now, it’s a long season. Step back from the ledge and give this team a little more time.