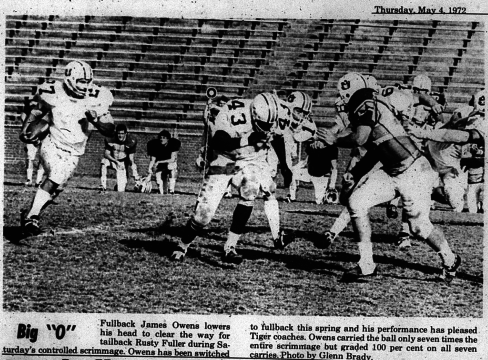 “We’re going to surprise a lot of people this fall,” said fullback James Owens, Auburn’s first black football player, said in the spring of 1972, before The Amazins were amazin. “We’ve got the pride and the attitude to win.”

No wonder he went into the ministry. He’s apparently been prophesying for 40 years.

Owens has been getting a lot of press lately. Auburn named an award after him. And they’re giving the award named after him to him Saturday. But here’s one of the first big stories on “Big O,” from the May 4, 1972 (Happy 18th Birthday, Dad!) issue of the Auburn Plainsman. (For more rare photos of Big O, go here.)