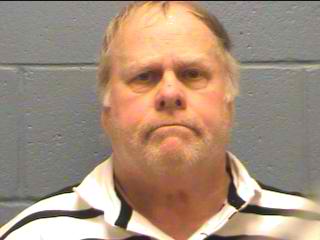 The Bama in Harvey Updyke is spreading westward.

The confessed Toomer’s Oaks tree poisoner and meanest person in the world was apparently arrested in Hammond, La (where he reportedly has family) last week after causing a scene while trying to return a $110 lawnmower to a Lowe’s.

The problem? Harvey thought it was worth $150. The charges? Terrorizing, obviously.

When the arresting officer arrived, he advised Updyke to call an attorney. Updyke refused and said “he would take care of this on his own.”

“He had a sad story,” said Hammond Police spokesman Lt. Vincent Giannobile. “He said he was going to prison anyway, he had a bad heart, and he didn’t care. He kept insinuating that he wasn’t going to take no for an answer.”

Updyke said he would “come back and take care of everyone,” after the officer on scene told him he was not allowed back on the property. According to the report, he continued to tell the officer he would return to the store and “it would be his last time.”

Giannobile said the officer felt Updyke’s statements and attitude were threatening, and arrested him.

According to the Hammond Star, Updyke was released from jail the next day on a surety bond.

Oh, and Texas, where Harvey once worked as a state trooper (here’s his photo), also has a warrant out for his arrest. The charge? Terrorizing, obviously. Seriously.

Updyke is scheduled to stand trial in Opelika–again–October 1.