It’s one of Auburn’s most diverse and unique organizations, but the the Tigerettes and Tiger Hosts/S.O.A.R.’s tradition of service has changed drastically since starting in 1978, in form if not function. The Tigerettes and Tiger Hosts serve as public relations representatives for Auburn’s Athletic Department, as well as working with Auburn’s Office of University Recruitment in recruiting prospective students.

“The Tigerettes and Tiger Hosts/S.O.A.R. have definitely changed over the years,” says Sue Locklar. Locklar has served as Auburn’s On Campus Recruiting Coordinator for 35 years and has seen first hand the evolution of the group’s operations since the Doug Barfield and Pat Dye era of Auburn Football. Though the Tigerettes have always been strictly supervised since starting in 1977, Locklar explained, “The NCCA rules have put so many restrictions on host groups lately.” 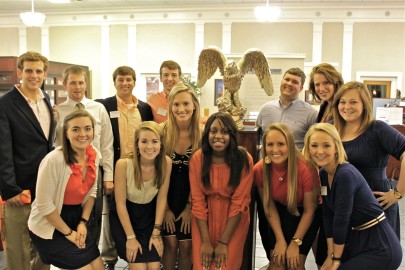 As the name suggested, Tigerettes was a women’s organization until 1992 when the organization expanded to include men (Tiger Hosts), becoming the first athletic host group in the country to do so. During the 70’s and 80’s (you can see photos of the first Tigerettes here), members could recruit off-campus in groups of three or four and have contact with the prospective Auburn student athletes. They could write letters to individual prospects, have dinner at off-campus restaurants, go bowling, etc. According to one former Tigerrettes, “during football season we could interact with the football players by making a poster or cookies for each game.”

Working under such limitations, in addition to her other responsibilities, is hard work, says current Tigerette Abbey Brewer. But Brewer says enjoys it. “I love being a part of Tigerettes and the Auburn Family.”

In spite of the restrictions, the organization has helped Gene Chizik’s staff land 4th, 7th, and 10th-ranked recruiting classes, and appear on their way to helping bring in another T0p Five class in 2013.

Auburn Running Backs Coach and Recruiting Coordinator Curtis Luper calls Tigerettes and Tiger Hosts “a critical component to our success here at Auburn for many reasons.

“They are a valuable resource when it comes to sharing their personal experience here at Auburn not only with the recruit, but also with the recruit’s family,” Luper says. “We would not have the success we have had without the hard work and commitment of the Tigerettes and Tiger Hosts.”

Related: Tigerettes Coordinator Has History of Taking Precautions Against Even The ‘Semblance’ of Impropriety.