Auburn grads Caitlin King and Brittany Fletcher, cast members on the upcoming season of The Amazing Race, made the show’s first preview clip. We’re taking it as a sign that much embedding awaits.

The former romantic rivals turned best friends are seen “gobbling down a traditional Chinese dessert” at a restaurant in Shanghai, China alongside fellow cast members and Chippendales dancers James and Jaymes—those are their naymes—whose “beast mode” gobbling appears to have paying customers on the verge of retching.

Here are Caitlin and Brittany learning that they’re competing not for one but TWO million dollars, the largest prize in Amazing Race history, just before repelling off a 10-story high building to start the show’s new season, which premieres Sunday at 7 pm CST on CBS. 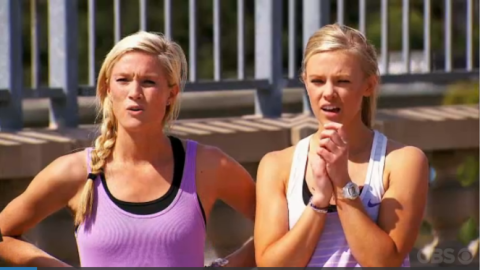 The new season of The Amazing Race premieres Sunday at 7 pm CST on CBS.