Letter from Auburn Athletic Dept. to the Dallas Morning News (1940) 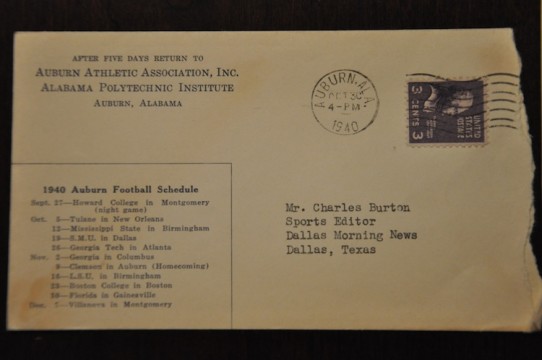 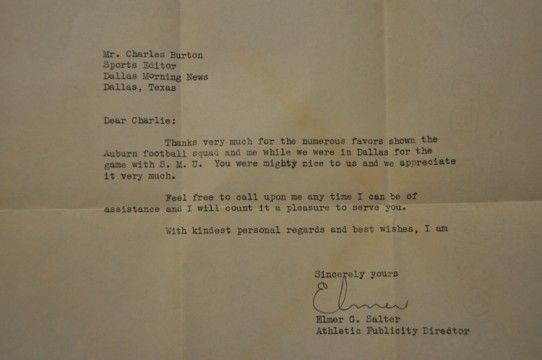 “This is one of the more unique items in my collection. It is a letter dated October 30, 1940 from Elmer G. Salter, Athletic Publicity Director to Mr. Charles Burton, Sports Editor of the Dallas Morning News thanking him for his hospitality shown to the Auburn team while in Dallas to play SMU. Definitely a different world than we live in today.”

I get a real kick out of submissions like this one that allow me to dig into a part of Auburn history I previously knew nothing about. In this case, the letter works in two ways. First of all, I had no idea we had any football history with SMU whatsoever. It’s not a lengthy history, mind you, as we’ve only played the Mustangs three times (once in Dallas, once in Birmingham and once in Auburn) and lost all three, but still. The 1940 team that defeated Auburn 20-13 would go on to finish 8-1-1 and win the old Southwest Conference title (along with Texas A&M) so it wasn’t like Coach Jack Meagher’s Tigers lost to a patsy. I can now add this to my limited knowledge of SMU that includes Doak Walker, the Pony Express, the Death Penalty and their sweet uniforms.

The second part of Auburn history that this letter turned me onto is the existence of Elmer G. Salter. Aside from being courteous enough to send a thank you letter to a sports editor in a town his football team just visited, he also holds a special place in Auburn sports history. According to an Alabama Senate Resolution that was passed to honor him upon his death in 2003 at the age of 95, he was the first Sports Publicity Director for Auburn (then API) and later founded the first privately owned radio station in town, WAUD. The resolution goes on to say that Salter “was a kind gentleman who loved everything that was Auburn-related: The town, the Auburn Tigers, and the University itself.” To read the entire resolution, click here. That’s an Auburn man worth remembering.

As for the envelop and letter, there is just so much goodness there to take in.  The 1940 schedule (with Clemson as the homecoming opponent), the three cent stamp, another example of Auburn being used well before the school officially changed names. The only thing missing is a “War Eagle” sign off. 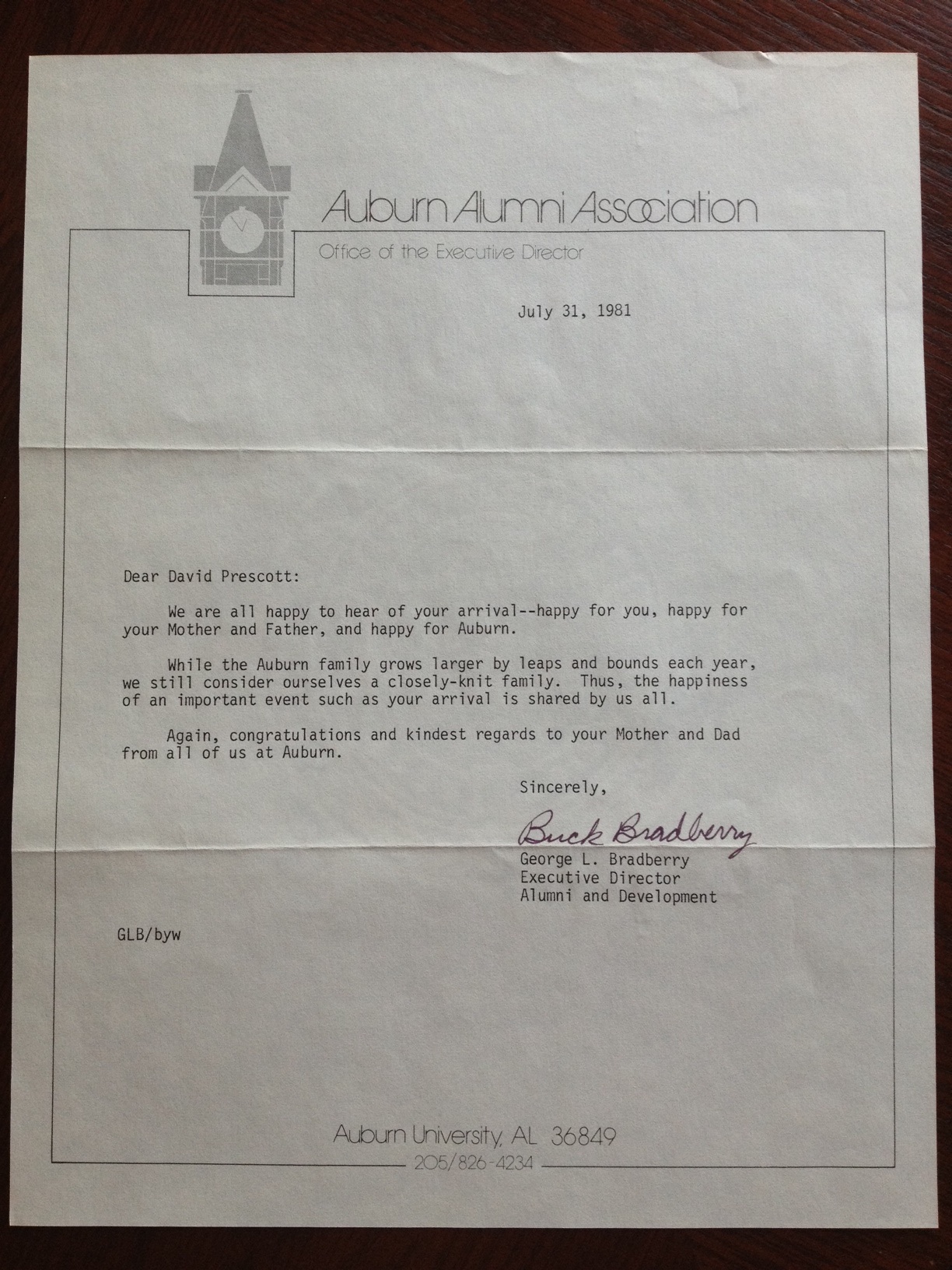 “My parents gave me a couple more gems from my childhood that may be good for your relics series. The first, which I’ve never before seen, is a letter from AU Alumni Association Director Buck Bradberry sent to me a little over a month after I was born. This letter was kept in a folder by my mother with all of the greeting cards sent by our family and friends upon my birth. While looking through all those cards with my wife, we found this letter. I sure am happy that all of Auburn was so happy in the summer of 1981.”

While we’re looking at old letters, here’s one that proves in black and white that the Auburn Family was not some 2010 marketing creation. The letter’s sender, Buck Bradberry, was an assistant coach under Shug Jordan for 15 years before going to work for the Alumni Association. Aesthetically, I like the old Samford clock tower logo (was it one o’clock for 1981 or was it always like that?). Also note the pre-334 area code at the bottom. 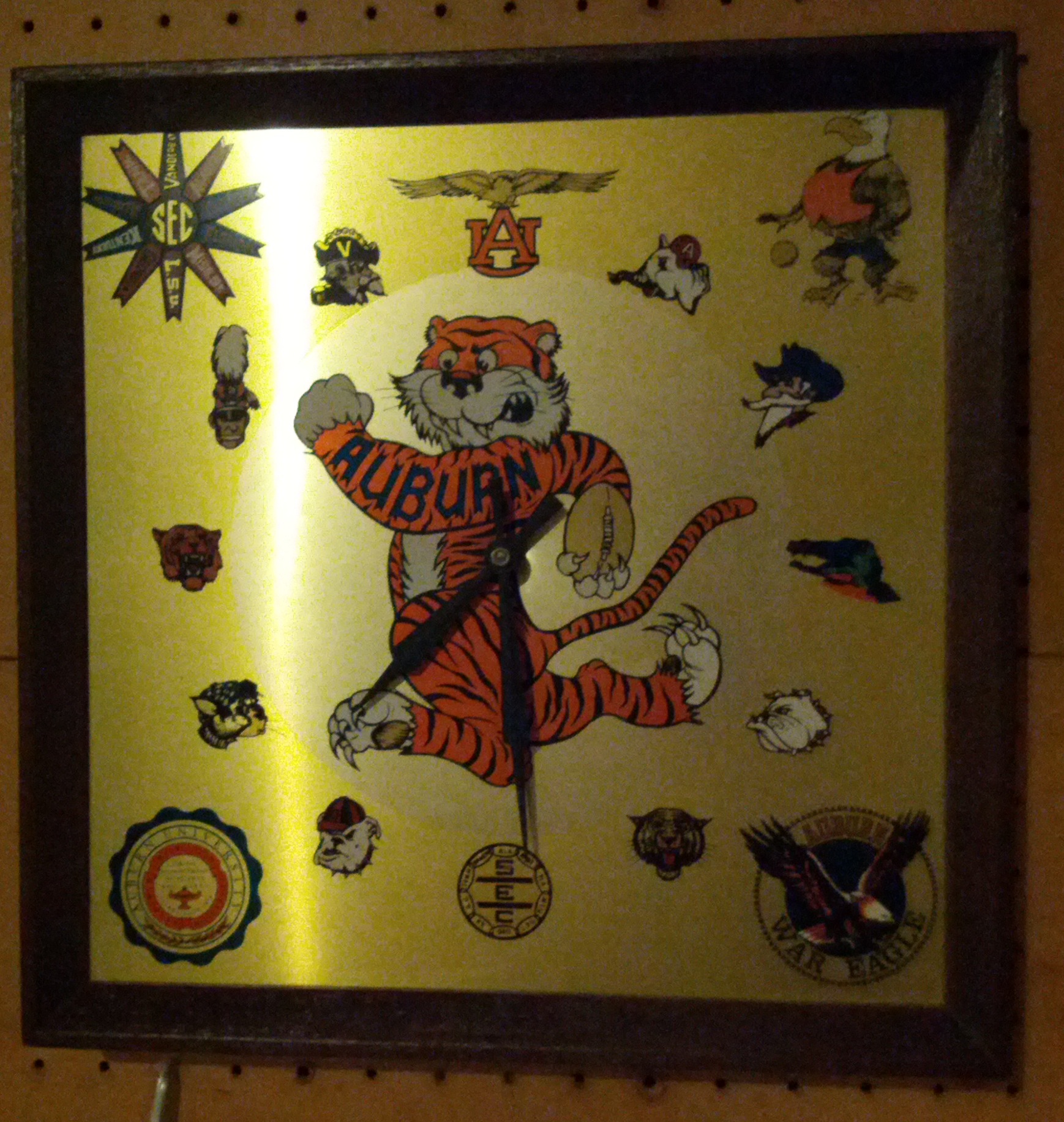 “No idea when this clock is from. I think my bro got it in the seventies. Got handed to me a couple years back.”

We go back to the clock well again for this classic little number. This is an old logo lovers feast, with the 10 team SEC fan and some great little mascot heads.  I also particularly like the basketball dribbling bald eagle in the top right corner. 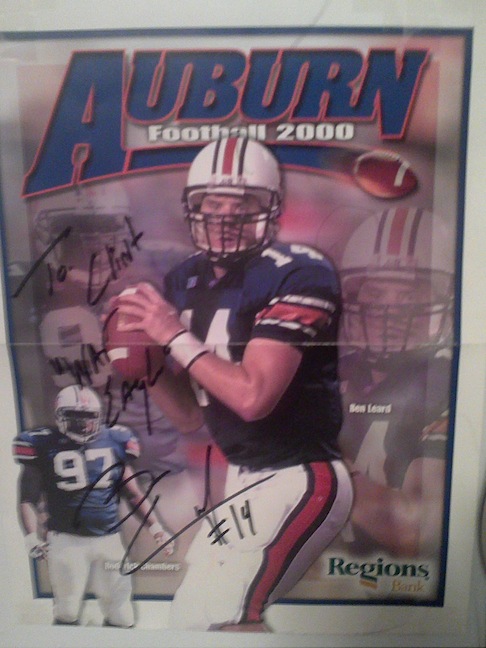 “A long time ago, obviously 2000, when I was 6, we went to an Auburn game, and bought a program. Back then, they had posters inside the books. Since then I’ve had this poster hanging in my room. For the 2009 Iron Bowl, Nissan came with their Sports Illustrated/Heisman campaign, and you could get a picture with the Heisman and such. They also had former players there for autographs. I remember Pat Dye was signing the day before the game, and Bo was the last. Well, I read Ben Leard was signing, and remembered this poster. Turns out my brother and I were 3rd and 4th in line. Ben saw my poster, and said “Man! This is old!!” and signed it and shook my hand. One of the very few autographs I have.”

Ben Leard is one of my favorite Auburn players and it has little to do with his stats or even his record as a starter. I like Leard because he never quit. That probably reads as cliché to you as it does to me, but after 1998 many expected him to do just that. He was the heir apparent to Dameyune Craig that year and promptly fell on his face. Maybe that’s too harsh. The entire 1998 team fell on its face, starting with a 19-0 loss to Virginia at home and finishing the season 3-8. Still, Leard was not good, and would lose his starting job to Gabe Gross. At that point most Auburn fans wrote him off forever (much like Chris Todd a decade later). In 1999, he finally started to live up to his advanced billing out of high school. Despite an injury that cost him several games, he finished the year with a rating over 170 and a 12/1 touchdown to interception ratio.  The highlight of the season, and his career, came in a big win over Georgia in which he threw for 416 yards and 4 touchdowns.  I’ll never forget that game. In 2000, the senior quarterback led the Tigers to an SEC West title (with more than a little help from Rudi Johnson), a win over Alabama that broke a two year skid and a close Citrus Bowl against Michigan. He’s still 8th all-time in passing yards at Auburn with 4,289, just behind Pat Sullivan. Not bad for a guy everyone had given up on two years earlier. 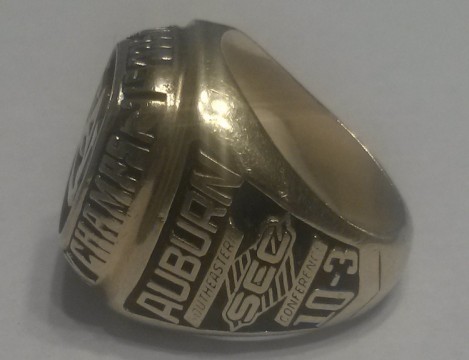 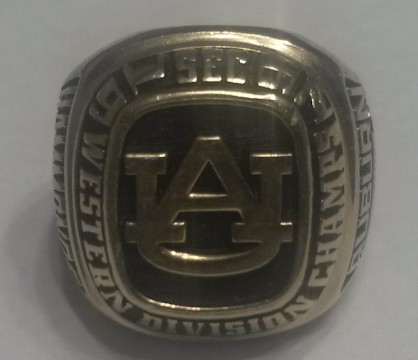 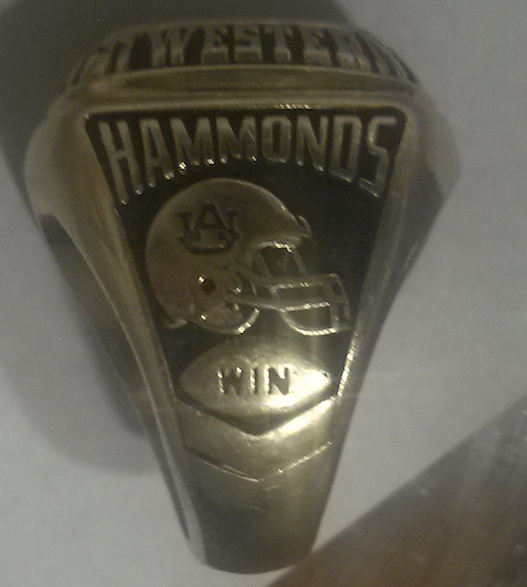 A couple weeks ago we had an API class ring from 1918. This ring is from the 1997 SEC Western Division title that Dameyune and company won for Auburn, the school’s first. Glad to see Bowden’s season-long slogan “W.I.N.” was featured. 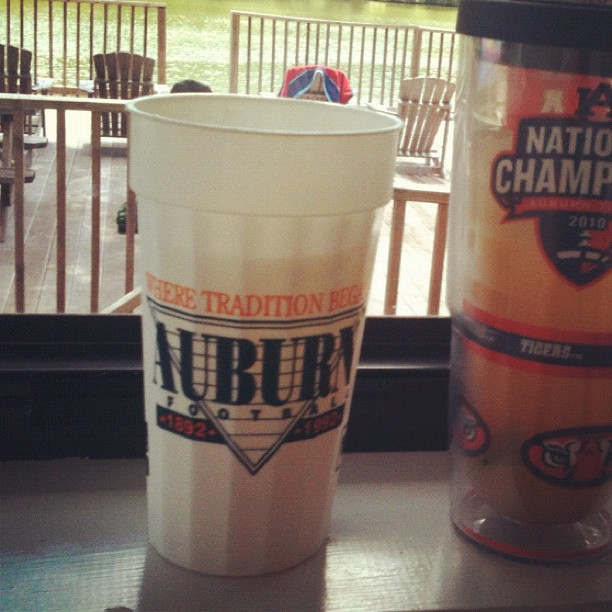 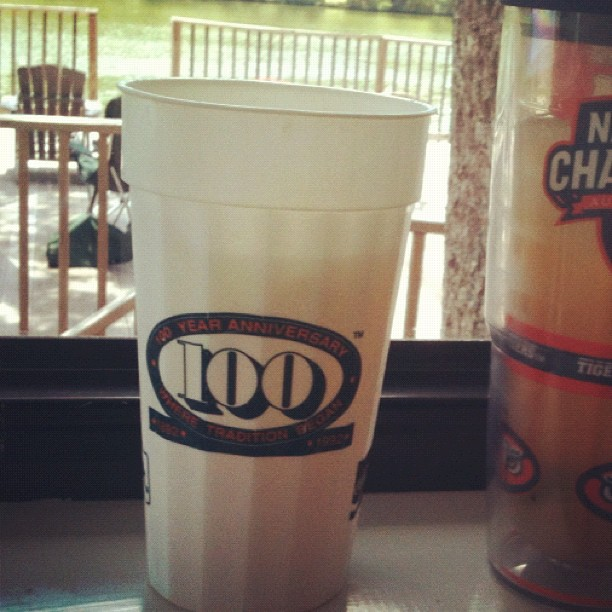 1992 wasn’t Auburn’s best season on the field (5-5-1) and it would be Pat Dye’s last, but it was its 100th.  This cup commemorates the occasion as only a stadium cup can. If my math is correct, 2012 is our 120th season, meaning we can probably expect another round of commemorative cups in five more years. Make sure at least one of you hangs onto it for a while so we can use it in a future post.

That’s it for this week’s edition. Thanks as always to all of our great contributors. To check out past posts, click here. To share your own relics with the Auburn world, email me at [email protected]

Previously: War Eagle Relics pours some sugar on you.