For our first game week edition of this post, we thought we’d take this opportunity to remind you all what big Auburn athletic supporters we are here at The War Eagle Reader. How big? This big… 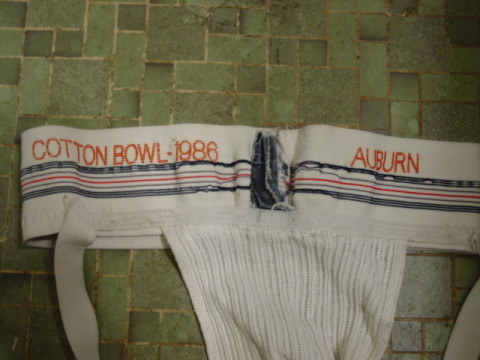 “In 1985 I knew a young lady that worked as an equipment manager for the football team. I tried in vain to get her to acquire a real game jersey for me. Apparently the athletic department frowned on such acts of generosity even to the most devoted Tiger fans. As a substitute she did manage to procure one of the official Cotton Bowl jockstraps that all of the players were to be issued for the upcoming bowl trip. Sadly, the game was a major disappointment but at least I have an Auburn souvenir that few others have or, most likely, would even want! My wife thinks I am crazy for sending this picture. She may be right!”

Before sending this to me, Ben asked if it would even be something I would want to use. He worried it might be in poor taste. If it is and you are offended by the sight of a football player’s undergarments, I most sincerely apologize. Personally, I could not reply fast enough with an emphatic YES PLEASE SEND IT NOW. I could look through photos of old Auburn T-shirts and schedule posters all day and be perfectly content, but something as rare as this had to be shared. Even better, this bit of laundry from an otherwise forgettable 36-16 Cotton Bowl loss to Texas A&M, came to us courtesy of Tiger Laundry, (FREE PLUG: Tiger Laundry is a service that provides pickup and delivery to Auburn students for their bulk laundry and dry cleaning needs. It is available directly to all Residence Halls, and to select off-campus Greek houses. I would have totally used them when I was a student.) It’s as if Ben’s future was determined forever on the day he received this gift.  He and his wife also run Sydney’s Vintage Clothing, a vintage clothing store on Gay Street which may not specialize in Auburn relics but is still a spiritual partner in preserving the past.

When the Tigers return to Jordan-Hare in a few weeks to play their first home game against noted Bama-slayers Louisiana-Monroe, the 2012 gameday spirit buttons will make their celebrated return. For anyone unfamiliar with the iconic buttons, this assortment from the middle of the Dye-era pretty much tells you all you need to know.  The slogans are hit and miss (I love “Vols-in-Tears,” not as fond of “Kan Kansas”), but you can always count on seeing your fair share every fall. 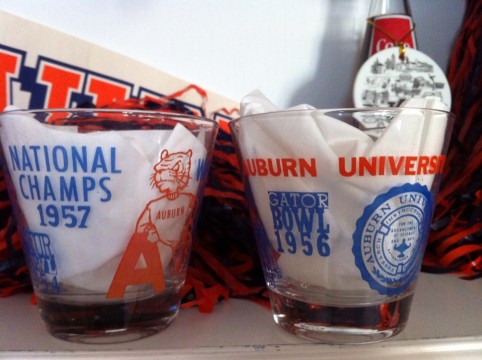 “I’ve been meaning to send you a photo of my prized Auburn 1957 National Championship glasses since you started your series on Auburn relics. Since many of the featured “relics” are from not so long ago, I’m starting to feel a bit like an Auburn relic myself, but these glasses are actually older than I am. They were given to me sometime in the 1990s by an older lady I worked with in Mobile. She was a huge Bama fan, so I’m not sure why she even had these glasses, but she knew that I would appreciate them more than she ever could. The glasses photographed better with some tissue stuffed inside them. They are a part of my “Auburn Shrine,” which I’m also sending a photo of just for fun. Every Auburn home has one of those, right?”

Now that tailgating season is here, it might be time to take these out of the shrine and put them to good karmic use with a cocktail or two to provide some luck to this year’s team. It’s nice to see another item that remembered to celebrate the ’57 title, something far too rare and a point I raised in a previous post. Interestingly, the glasses also list the 1956 Gator Bowl. Technically that game was in 1955 (New Year’s Eve) and Auburn lost to Vandy. I think that’s the 1954 Gator Bowl listed on the bottom of the glass on the left. Auburn did win that game, beating Baylor 33-13. 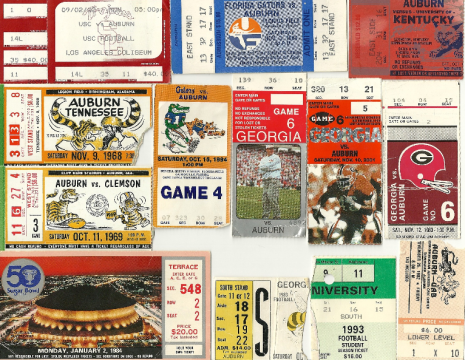 I was excited to see the season ticket pictures folks started sending out in the past week or so upon their arrival.  I always look forward to seeing their design even though I’m not a season ticket holder myself (the shame). This is a collection of mostly road game tickets over the years. Cool to see a ticket to the 50th Sugar Bowl Classic we featured in a post a few weeks ago. Some of these are a little lacking in the creativity department, but may just be the tickets issued to our fans and not the standard fancy versions we’ve come to expect. Looking at the Auburn – UAB basketball ticket in the bottom right corner raised a question I couldn’t find the answer to online. Why is UAB represented by a chicken? 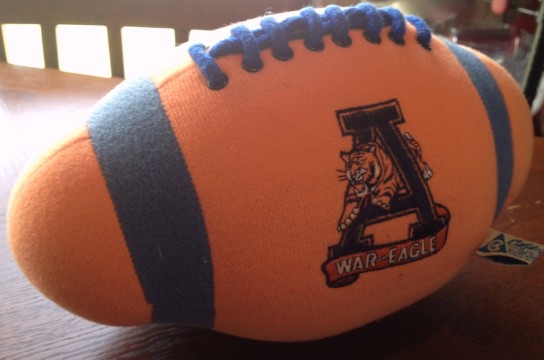 “I well remember the second item. This football rode in the car with me on the way to Auburn home games throughout the mid-80s. After big day and a win for the Tigers, I’d fall asleep in the backseat with my head on this plush football. When not making a trip to Auburn, this football stayed on my chest of drawers; I spent countless nights staring and wondering why it looked like the orange and blue they use in the swamp, but that big A with a roaring tiger let me know it’s fine just like it is.”

If you’re taking your young kids with you to the game this weekend, make sure you have something like this for them to cuddle with on the long drive home. David had his football, your son or daughter may attach their memories of a great Tiger win to a stuffed Aubie or an Auburn pillow pet. These things are important when you’re young and help build on their love of our school and its team. 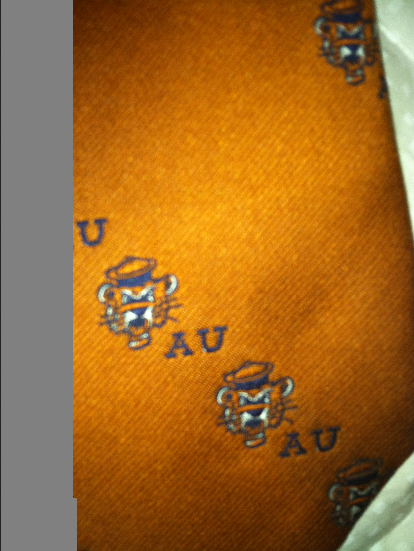 “This was my grandfather’s. I have no idea how old it is. I have worn it once on the day I got back to work after a trip to Glendale.”

If you’re going to celebrate a national title with some antique neckwear, this is the way to go. Subtle, vintage and such a lovely shade of burnt orange. Shug would have loved it, I’m sure.

That’s it for this week. Thanks as always to all of our great contributors. To check out past posts, click here. To share your own relics with the Auburn world, email me at [email protected]. Everyone have a safe and fun trip to the game this weekend. Wear Blue. Cheer loudly. War Eagle.