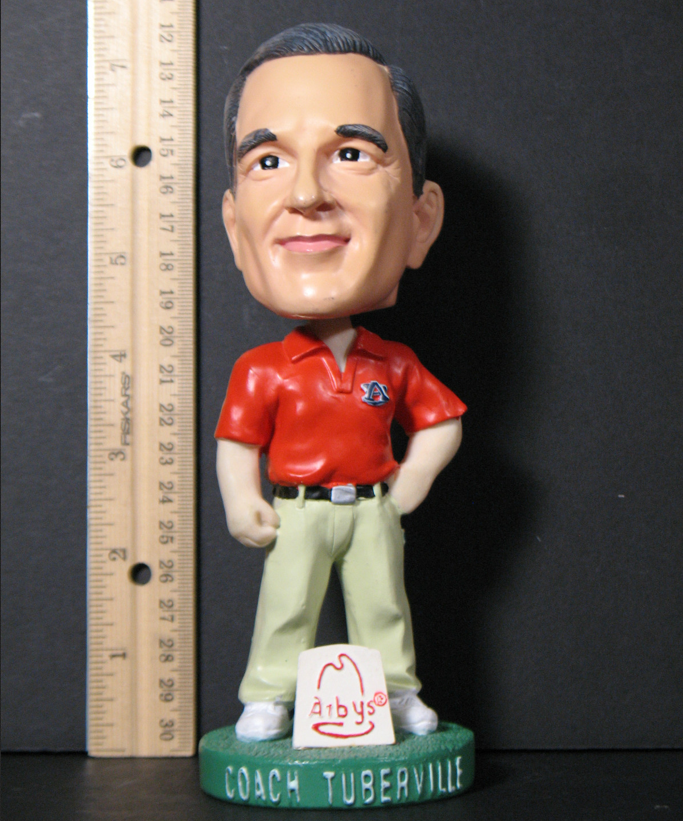 The following article, part one of three to be presented here, was extracted from a much larger overall history of the entire Tommy Tuberville Era at Auburn University, and will appear in the upcoming book, Decades of Dominance: Auburn Football in the Modern Era, by your intrepid Wishbone columnists, John and Van.

This time we look at Tuberville’s third season on the Plains, when a sudden downturn in the team’s fortunes threatened to send the Riverboat Gambler packing before he’d barely even gotten started at Auburn.  We begin with the 2001 season—as bizarre an Auburn football season as there’s probably ever been:

New players burst onto the scene for Auburn in 2001, some destined to make a huge impact on the program for years to come, others…not so much.

Jason Campbell had signed with Auburn and then redshirted the 2000 season, as had Ronnie Brown.  Now they would be joined by true freshman Carnell “Cadillac” Williams.  Cadillac’s recruitment was a thing of legend: Reportedly leaning at first toward Alabama, he had changed his mind and decided that Tennessee represented his best opportunity as a player.  Tuberville would have none of it.  He and several assistant coaches descended on the Williams household all at once, making their best pitch to lure the young running back to the Plains.  It worked.  When signing day came, Cadillac unzipped his jacket to reveal an Auburn jersey underneath.

Williams immediately impressed his new teammates with his work ethic.  They jumped him early, calling him “Yugo” as if to take him down a peg because of his fancy nickname.  He responded by working hard and earning lots of playing time by the end of his freshman season.

Unfortunately, reality intruded into the ’01 season very quickly.  After early wins over Ball State and Ole Miss, Auburn prepared to travel to Baton Rouge for a game with LSU.  That game would have taken place on September 15.  But on Tuesday of that week came the “9/11” terrorist attacks.  All games for that Saturday were postponed to later in the season.

A week later, with the country still deeply in shock, the Tigers faced a flight to New York for a game with Syracuse at the Carrier Dome.  One can only imagine the mind-set of young men boarding a plane for New York, less than two weeks removed from seeing jumbo jets fly into the World Trade Center towers.  The Tigers held their own for a while—and Jason Campbell even rushed for a long touchdown—but unblockable defensive end Dwight Freeney seemed to spend the entire game living in the Tigers’ backfield, and eventually Auburn fell to the Orangemen, 31-14.

The next three weeks can rightly be summarized as the “Damon Duval Show.”  Never before or since has one kicker delivered victory against three straight opponents in consecutive games.  First came Vanderbilt, who tend to give the Tigers a much closer contest in Nashville than in Jordan-Hare.  Indeed, this time victory seemed in their grasp—but they attempted a fake field goal late, which was snuffed out by the Tigers.  Moments later, it was Auburn winning the game by riding Duval’s leg to a 24-21 triumph.

The next week, Auburn welcomed nemesis Jackie Sherrill’s Miss State to the Plains—a Miss State to whom Auburn had now, unthinkably, lost four consecutive games.  The Bulldogs made this one close, too, but Duval once again proved the difference as his late field goal pushed the Tigers to victory, 16-14.

The trifecta was accomplished the next weekend, with Steve Spurrier bringing what would turn out to be his final Florida squad to Auburn.  The Gators were undefeated and ranked #1 in the country, and they had crushed the Tigers every season since Terry Bowden’s big “Super Bowl” win in the Swamp in 1994, even winning twice over Auburn the previous year.  There was nothing to indicate this game would be any different—but it was.

Switching between Campbell and Daniel Cobb at quarterback, and with a patchwork linebacking corps due to injury, the Tigers scratched and clawed and kept the game close all the way to the end, deadlocked at 20-20—whereupon Damon Duval was asked to do it again.  The forecast had called for rain for most of the game, but it had miraculously stayed away—until just before the final play, Duval’s field goal attempt.  As the Tigers lined up for the kick, the winds began to swirl and heavy rain blew into the stadium.  Duval got the kick away, and everyone watching on television or from the north end of the stadium could see that it was going to go horribly wide right.  Except—it didn’t.  Duval’s kicks always tended to curve out and back in, and in some cases that phenomenon had caused him to miss.  This time, a combination of Duval’s curveball and the storm blowing in caused the ball to hook back in—right down the middle, dead center.  The Tigers had knocked off top-ranked Florida and Duval had won his third game in a row with a last-second kick.

At that point, however, the 2001 season was essentially done.  It was as if the Tigers (with one notable exception) decided to take the rest of the year off.  A week later, on October 20, they defeated Louisiana Tech 48-41, but it would require overtime to finish off the directional Bulldogs.  Once again victory came on the final play of the game, but for once it wasn’t Duval who got it done but troubled receiver Deandre Green catching the winning score.

Remarkably, the Tigers would win only one more game that season—over Georgia in Athens on November 10, thanks to a rugged, 41-carry performance by Cadillac Williams.  (After the game, Tuberville famously admonished first-year UGA coach  Mark Richt that you can’t win in the SEC without emphasizing the run game.)

Even more astonishingly, in a year when the SEC West teams knocked each other off, the Tigers would still finish the season with a share of the Division title, despite (eventually) losing five games.

One of those losses, of course, was perhaps the most infamous Iron Bowl loss of Tuberville’s career: an “out of nowhere” crushing by Dennis Franchione’s Tide squad, 31-7.  It had begun promisingly enough, with Cadillac Williams moving the ball against the Tide’s strong defense—but then he’d gone down under a pile, and suffered a broken collarbone.  With him out of the game and out for the season, the Tigers couldn’t get anything going on offense the rest of the way.

How could it happen?  Auburn fans searched for answers. Some pointed to a Halloween frat-party photo that had made the rounds the week before the game, showing several white Auburn students in blackface and others dressed as the KKK.  This, they claimed, had angered some players to the point that they simply allowed the Tide to win.  Others rejected this as preposterous, but the bad feelings remained, hanging like a cloud over Jordan-Hare.  Grumblings about Tuberville grew louder as the season spiraled downward.

One way or another, the Iron Bowl was done, and for most of Auburn history, that would also mean the regular season was done, as well.  Alas, not so this year—one opportunity for redemption remained:  LSU.

That game with LSU—a de facto divisional championship game—marked yet another in a long line of oddities in the Auburn-LSU series.  You know about the “Earthquake Game” and the “Barn Burner” and the “Interception Game.”  This one was the “9/11 Game,” originally scheduled for September 15.  For the first time since the Iron Bowl rivalry was renewed in 1948, the final game of Auburn’s season was with someone other than the Crimson Tide.  The atmosphere surrounding this contest was perhaps even more intense than that on the field of play; there were scuffles among fans before and especially after the game, and a minivan painted in Auburn colors was vandalized and set on fire.  Attendees on both sides complained for days afterward of shoddy treatment by the other side, and at one point the university presidents even got involved.  The Auburn-LSU rivalry was reaching a new—and distasteful—level of intensity.

As for the game itself, a 27-14 defeat kept Auburn out of a second consecutive Championship Game, sending an LSU squad with the same 5-3 conference mark as Auburn to Atlanta instead.

Coda to the 2001 season was a berth in the Peach Bowl in the Georgia Dome in Atlanta against North Carolina.  The Tigers hadn’t faced the Tarheels since a 20-10 win in 1988, and this time the Heels would get the upper hand.  Carolina’s fierce defensive line, led by Julius Peppers, gave Auburn’s offense fits all game long.  The Tigers fought back late to pull within six, but couldn’t close the deal and lost, 16-10.

A season that had begun with such promise and that had seen the heights of 6-1 had ended at 7-5.  Even a share of the Western Division title didn’t mean much, since the Tigers had been denied the trip to the Championship Game thanks to the LSU tiebreaker.  Pressure ramped up on Tuberville in the offseason, and he responded with the first of his trademark moves: cutting loose the offensive and defensive coordinators.

The 2002 season would begin with two new faces on the sideline—faces that would become very, very familiar to Auburn fans and college football fans everywhere in the years to come.