Editor’s note: I’ve been asked to speak about TWER a fair amount recently and whenever I get around to the part about how awesome it is, how varied its content, I inevitably mention the work of Amorak Huey, a creative writing professor who wrote for TWER a poem about every game of Auburn’s 2010 season. We called it Leaves of Turf because we’re awesome, if you’ll remember. Now the ‘Rak is Back, harnessing his muse on stuff equally important. 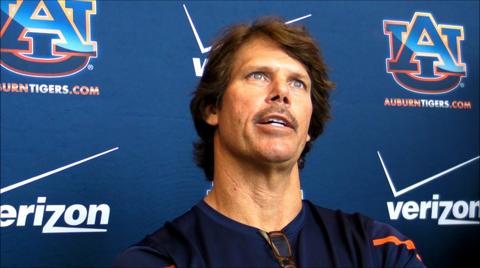 This poem has a Keatsian title, but it’s inspired mainly by Shelley’s famous “AUzymandias.”

Ode on a Freakin’ Mustache

I met a D-coordinator worth stealing
who said, “There is a team upon the plains
where a Roof has become a ceiling,
where ‘bend but don’t break’ has strain’d

all patience by allowing so many lengthy drives,
plus a madd’ning inability to cover a tall receiver,
like, ever. So many 10-yard outs on third-and-nine …
and yet these Tigers’ fans are true believers

in hitting hard, in smashing mouth and chasing rings.
I see where I am needed; let me just fluff out my hair.
I am VanGorder, with the coiffure of kings;
Look on my upper lip, ye Mighty, and despair!”