Editor’s note: I’ve been asked to speak about TWER a fair amount recently and whenever I get around to the part about how awesome it is, how varied its content, I inevitably mention the work of Amorak Huey, a creative writing professor who wrote for TWER a poem about every game of Auburn’s 2010 season. We called it Leaves of Turf because we’re awesome, if you’ll remember. Now the ‘Rak is Back, harnessing his muse on stuff equally important. Last week he wrote a poem about Brian VanGorder. This week? Scot Loeffler (with apologies to Paul Simon). 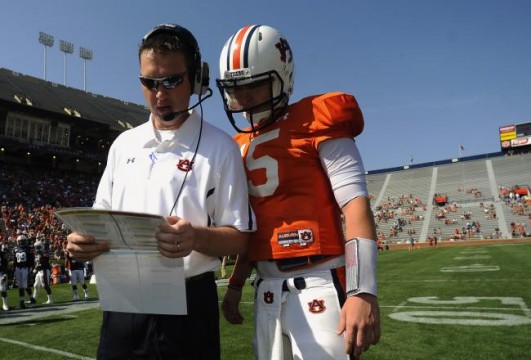 50 WAYS TO RUN YOUR OFFENSE

“The problem is that wacky spread,” Coach Chizik said.
“Football is easy if you take it at less breakneck speed.
We must give our own defense time to breathe,
there must be 50 ways to run this offense.”

Which means: Hop on the bus, Gus,
and take a hike, Mike.
You’re dead, spread.

Time to go pro-style, Kiehl,
you won’t need to rush much –
this worked in Michigan, man.

So hit the spot, Scot,
it’s time to see what we’ve got.