[UPDATE]: Photos and a video showing what’s left of both oaks.

A tree service contractor, under the supervision of Auburn’s Facilities Management and Auburn University horticulturist Dr. Gary Keever, began work to remove weakened branches and limb portions of the Toomer’s Oaks above the plaza and streets at the corner of College Street and Magnolia Avenue today.

Work crews arrived at Toomer’s Corner shortly after 6 a.m. and began using saws to cut away portions of the trees that posed a hazard to pedestrians shortly before 7 a.m. in heavy humidity and light rain.

The falling dead wood formed a large pile in the closed-off downtown section of South College Street before being loaded into a truck and removed. As of 8 a.m. work had only been done on the oak closest to College Street but is expected to continue through the afternoon.

TWER was the first to report that the trees would be pruned significantly for safety reasons. AP reports that the pruning is somehow an effort to save the trees are inaccurate.

Work crews removed dead branches from the sick trees in May for similar reasons. The amount to be removed today will be more much more significant.

A press release issued by Auburn’s Office of Communications and Marketing reads: “The work is being done between summer and fall semesters because of fewer pedestrians n campus and less vehicle traffic. While long-term decisions about the trees have not been made, fans are still welcome to gather at the corner this fall and continue the tradition of rolling the trees with toilet paper.”

The War Eagle Reader will post updates on the extent of the pruning throughout the day.

UPDATE: This photo tweeted at 10 a.m. by OA-News photographer Vasha Hunt shows the oak closest to college with bare limbs sticking into the sky: 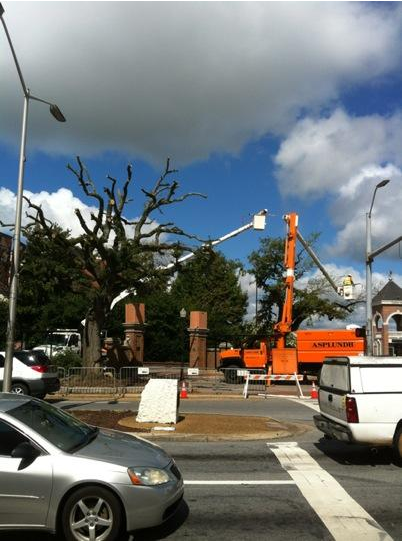