You know those parents that wait for, like, 10 days or something after the birth to name their kid? Phil Neel waited 10 years.

“With all my drawings up to half way through those 18 or so years, I would always have ‘Tigers’ on him or something like that, but never the name Aubie,” Neel, who passed away last month, told me when I interviewed him about his cartoon kid, Aubie, in 2006. “I had never heard the name Aubie. I don’t think we had ever used it in anyway with Auburn.”

Yes, Aubie entered the world of Auburn football program covers in 1959 (after a pre-natal career first in the sports section of the Birmingham Post-Herald and later on the cover of Auburn football media guides), but was not so dubbed until a 1969 cover that again pitted him against an almost indentically-inked foe: Cousin Clem. 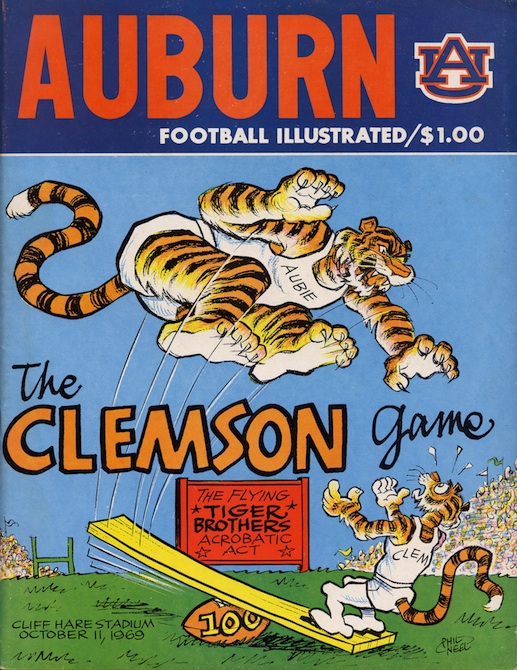 “For several years there they had a home and home with Clemson and several of my ideas about that were that they were cousins—they were tigers and we were tigers and one year I had something about a family reunion type thing,” Neel said. “I got to where I was calling the Clemson tiger Cousin Clem, and you know, Red Skelton had people like that—’cousin so and so.’ Anyway, it was kind of a like a country cousin, Cousin Clem”—except, you know, that one time they were brothers: the Tiger Brothers Acrobats.

“One of them (the acrobats) was named Clem, and I just said well, ‘I need a nickname for Auburn, and that’s the first time as far as I know that the word Aubie was used—on that particular cover.”

The reason he needed a nickname is because the Tiger Brothers Acrobats were dressed accordingly in identical jumpsuits. Once he actually began wearing clothes, Neel’s tiger had, up to that point, worn only a football uniform with “Tigers” written on the jersey—except when Auburn played a team nicknamed Tigers, then it was “Auburn” (…except the 1967 Clemson program when, for whatever reason, it was still “Tigers”). But this time—he had to distinguish between the two tigers, and Clem’s partner needed a name—it was “Aubie.” All of which is to say that Aubie owes his name almost entirely to the device Neel decided on for that one cover. Almost entirely.

“David Housel was real instrumental in saying that that’s what you ought to call him.”

But Neel didn’t start calling him that, at least not on the covers. The first time Neel’s tiger was referred to as “Aubie” on the cover of Auburn Football Illustrated was also the last time—at least the last time before he stopped making regular appearances. Through his (essentially) last Aubie program in 1976, Neel only had “Auburn” or “Tigers” on Aubie’s jersey. But in an issue published for the 1972 Chattanooga game, Housel wrote a story on Neel told through the voice of “Aubie,” Aubie with quotes around it.

Do you believe in inanimate objects coming to life, taking on human characteristics, walking taking, and laughing? Well, neither did I until I saw it happen.

It all took place one night as I took a short cut through Cliff Hare Stadium on my walk from the Athletic Department to Samford Hall. As I neared the North end zone, there, leaning against a goal post, I saw a man-sized Tiger. He wore a blue football jersey, number ’72 on the front, “Auburn” on the back, and he was puffing contentedly on a cigar.

You may not believe what follows, but this is what happened the night the fog rolled in, the hoot owls hooted, Samford Clock struck 13 and the Auburn Tiger spoke: “Hello there, I’m Aubie, the Auburn Tiger.”

Yep, that’s pretty instrumental. But though Housel’s acid trip may have played a large role in Auburn fans associating Neel’s drawing with the name “Aubie,” it was only after Aubie came out of retirement for the second (and final) time in 1991 did he again wear the word “Aubie” on his jersey*. By that time, the name had taken permanent—and, as far as young Auburn fans likely knew, exclusive—root in Aubie’s mascot namesake. Not that “Aubie” was merely a “hey, what about…” name decided on after the costume arrived in 1979— Aubie the mascot was inspired by and meant to look like Neel’s Aubie (or as the Plainsman referred to him in a 1977 story bemoaning his absence, “the Aubie Tiger”).

“But I hadn’t really referred to him all that much as Aubie, that (name) just seemed to fit in with the (mascot) character that they made,” Neel said.

“It was really just on one particular cover that I just thought ‘Aubie’ went along with ‘Cousin Clem,’ two brothers.”

(You know those parents that really don’t really put a lot of thought into their kid’s name?)

*At least on a program—”Aubie” was on his jersey in an Aubie drawing in the 1978 Glomerata; on those buttons made in the late 80s it was “A,” except that one where he’s on all fours again and naked.