Phil Neel, creator of Aubie, died this morning. He was 84.

According to Neel’s daughter Cindy Huguley, Mr. Neel passed away in his sleep at approximately 3:30 am. He had been battling Non-Hodgkins Lymphoma for several years and suffered congestive heart failure in March.

“He had been doing good this very week but just went to sleep and didn’t wake up,” Hugeley said. “It’s about as peaceful as you can go.”

To Auburn fans, Neel is mostly known as the father of Aubie, the cartoon tiger turned live-action mascot for Auburn University, which Neel brought to life early in his career as a cartoonist for the Birmingham Post-Herald and which graced the cover of nearly every Auburn football program from 1959 until 1976. 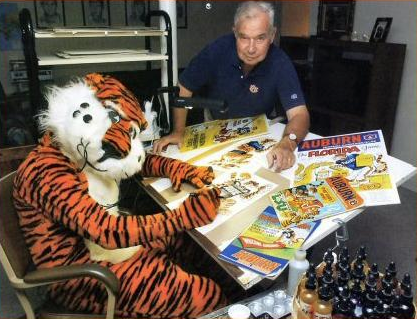 Early program appearances of Auburn for for hundreds of dollars on Internet auction sites like eBay and his 3-D manifestation, more commonly recognized among today’s Tigers fans, garners national collegiate mascot awards on a regular basis.

Three of Neel’s children–Mike, Rick and Cindy–graduated from Auburn. Each received the Algernon Sydney Sullivan Award, the university’s highest humanitarian award. Mike and Rick played football for the Tigers in the 1970s.

“We have so much reason to celebrate his life,” Hugely said. “We’re just celebrating someone getting to go heaven before us.”

Neel’s funeral will be this Friday at 11 a.m. at Deerfoot Baptist Church in Trussville.

Related: The Aubie Archives—The Art of Phil Neel: An Introduction?