The 2012 Auburn Football Media Guide was released this week as part of the SEC Media Days hysteria in Birmingham. This year’s cover features a pretty standard Photoshopped line-up of rising seniors in action. Nothing wrong with it, but nothing particularly distinctive about it either. In fact, when I first saw it I only thought it was so generic that I’d seen it before, until someone reminded me of the matching schedule poster that was released in the spring and almost immediately forgotten. Ultimately, it’s not very important. The cover doesn’t win you a Heisman or earn you any extra votes in the polls. Most of these things just end up collecting dust on some media member’s shelf for a few months before getting tossed for the following year’s edition. Some make it into the hands of collectors and survive this purge, however, a few of which are featured below. 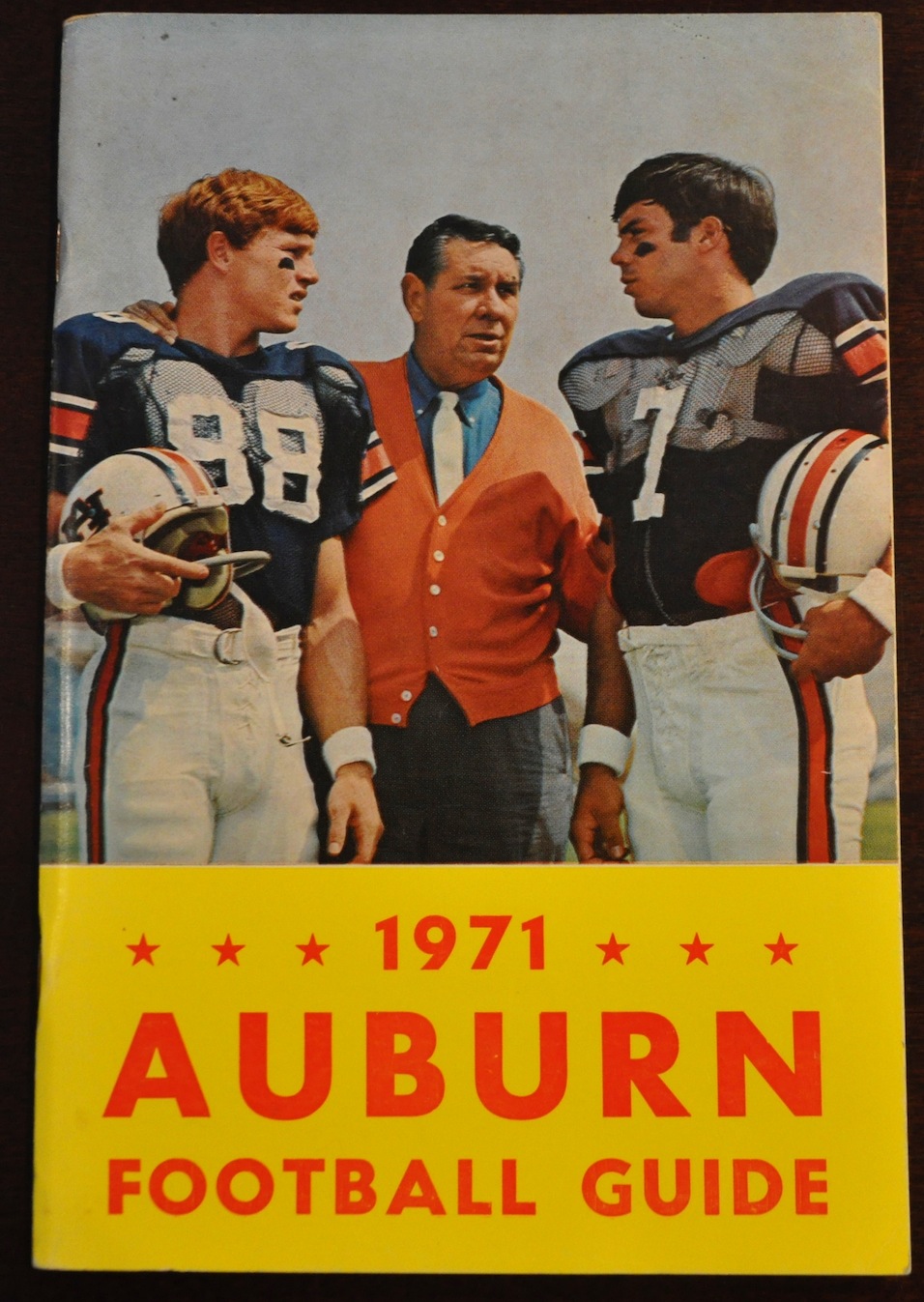 “This is a 1971 Auburn Football media guide.  I bought this at a memorabilia auction a few years back and was drawn to the picture on the cover of Terry Beasley, Shug Jordan, and Pat Sullivan. I especially dig the white tie, blue shirt, and orange sweater worn by Shug.”

This is one of my favorite still shots in Auburn football history. Shug looks especially dapper in an outfit that I hope to wear when I hit my late ‘60s and can maybe pull off the orange cardigan. Pat Sullivan, poised to begin his Heisman winning season, seems to be mind-melding with his favorite target. Terry Beasley, poised to begin his co-Heisman winning season (unofficially), proudly displays his single-bar facemask and bright red mane. It’s perfect. And that’s not even getting into the see-through jerseys or Sullivan’s awesome orange hip pads. Only thing I don’t get about the cover is the use of yellow on the bottom third, but I guess everything can’t be orange and blue. 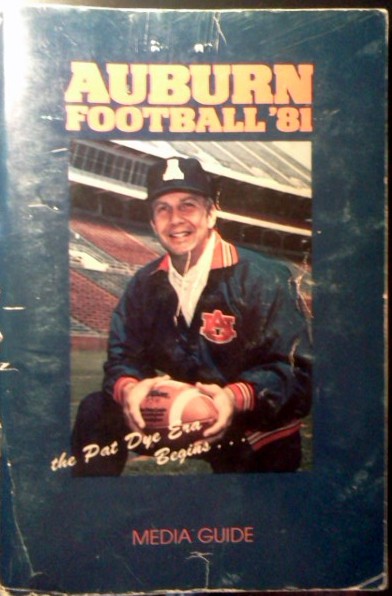 The Pat Dye Era Begins… with a clean and simple design (and Dye in a great jacket). Not much more to say about this cover, but it is definitely one worth hanging onto. Thank you anonymous donor for sending it to us. 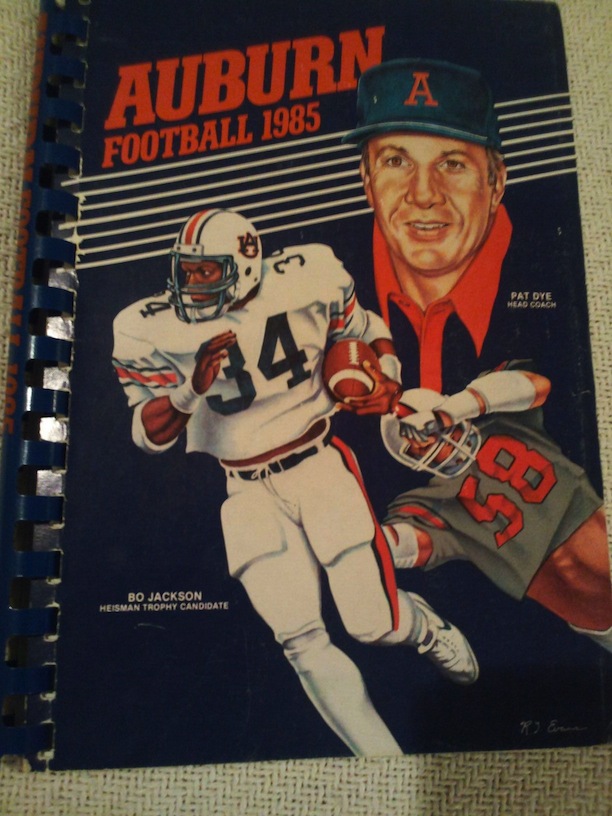 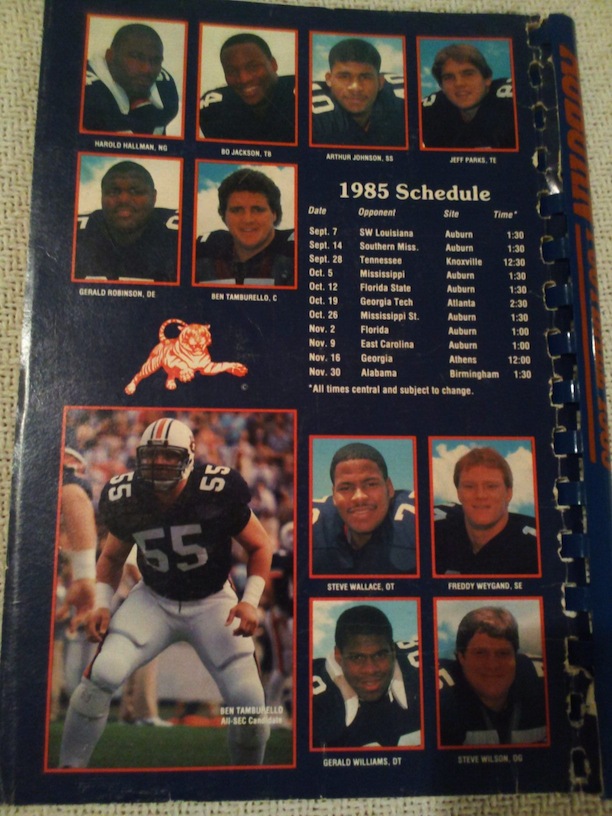 “These are pictures of the 1985 media guide. My mother-in-law found this at a garage sale.”

The media guide from Bo’s senior year got his Heisman campaign started right off the bat. I love the hand-drawn portrait, with a gray jersey wearing competitor lunging after Bo and a benevolent Pat Dye watching over everything. I also like that they used the back cover to feature the seniors instead of cramming them all on the front. It’s easier to do that when you have a Bo Jackson than it is in a year like 2012 where it would be more difficult to pick just one or two guys. Still, I prefer that some consideration be given to design over giving everyone equal billing. A nice shot of Lutzenkirchen or Blake making a great catch or McCalebb flying down the field would be better than having them all and then some. Oh well. Also of some note, with Bo on this cover and Pat on the cover of the 1971 guide, Cam Newton is the only Auburn Heisman winner not to appear on the cover of the media guide in the year in which he won the award. 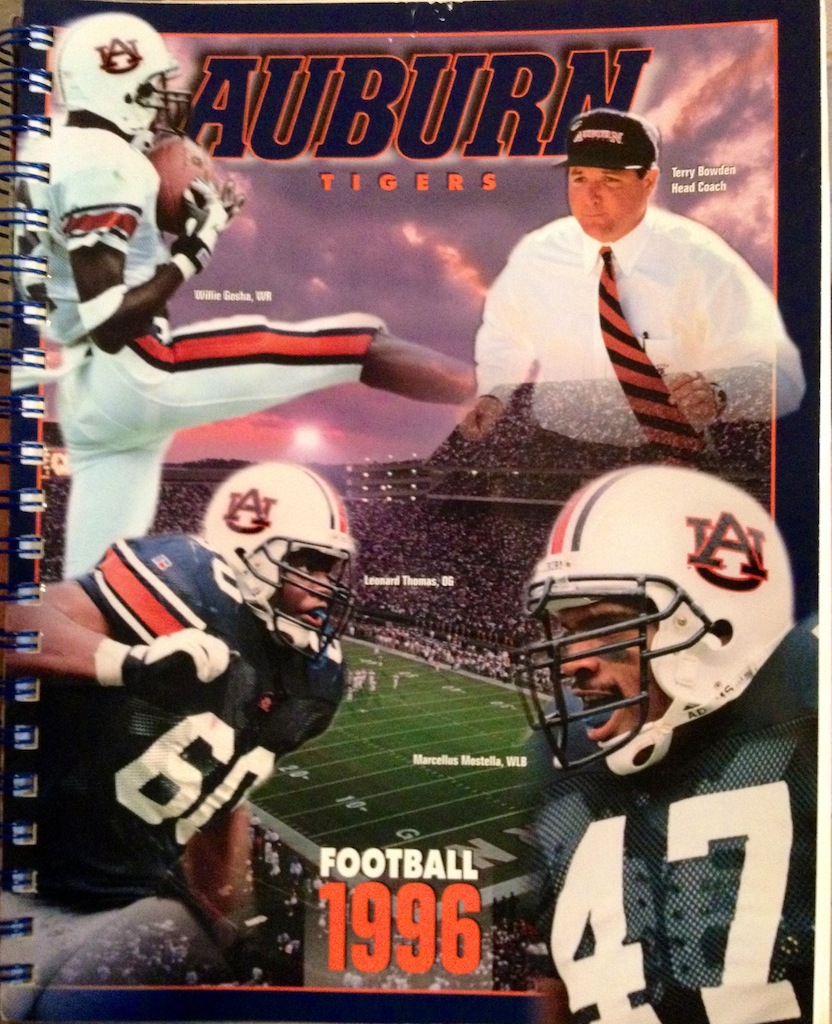 This is from my collection of old Auburn junk from my time as a student.  Unlike the previous three, there isn’t really anything significant about this cover. It wasn’t Bowden’s first year and we didn’t have a Heisman candidate. It was Dameyune Craig’s first year as a starter, though he was only a junior and not featured on the cover, sadly. The highlight for me is that it features two of my favorite Auburn names of all time in Marcellus Mostella (a true Hall of Fame name) and Willie Gosha (pronounced Go-Shay, for those too young to remember, which was just a lot of fun to say) 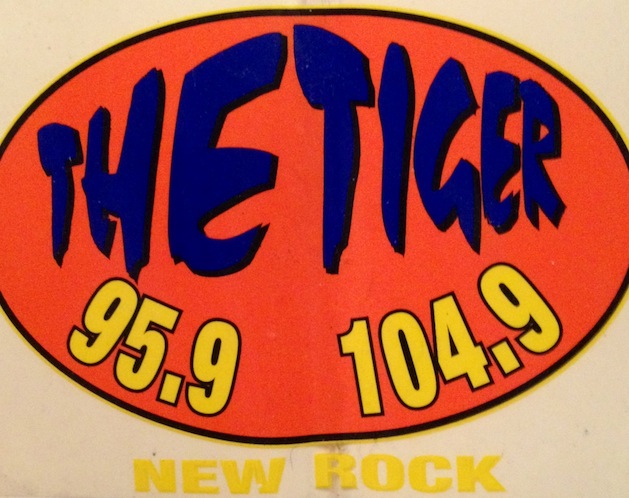 Getting away from guides for now, I found this sticker in a box in my basement and figured I’d include it while we’re talking media. It’s not really an Auburn University relic, but the station has hosted the nightly Sports Call show since 1996 that mostly revolves around Auburn sports (though it is now found at 93.9 on your dial and not 95.9. Didn’t know that until now). When I interned at the station for a summer back in 1999, the show was hosted by Andy Burcham, currently with the Auburn Network and the Station Manager for WANI News Talk 1400 (and one of the nicest people I have ever met on the Plains), and Bill Cameron, who still hosts the show. Also working for the station at the time as a co-host of the morning show and covering area high school sports was Chadd Scott, who went on to work for ESPN Radio and now works in radio in Jacksonville, FL after a long stretch in Atlanta. He is also a prominent college football presence online and on Twitter and is worth a follow if you are not already (@ChaddScott). 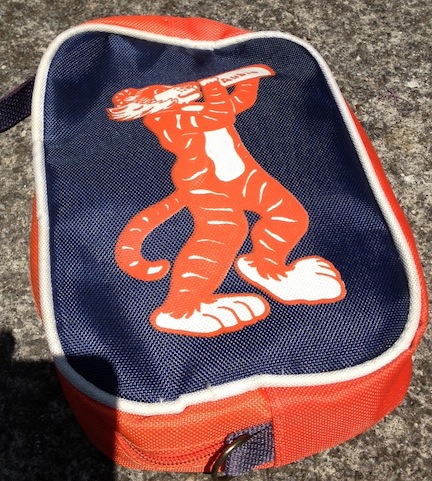 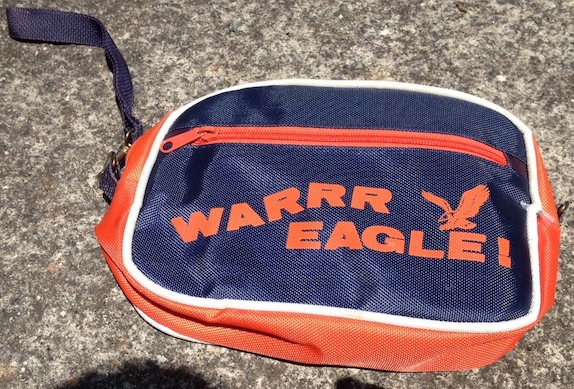 “I found this shaving kit or something similar (from when, I’m not sure) while sorting through the attic at my parents’ house in preparation of their upcoming move.”

I always like to include totally random Auburn stuff in these posts whenever possible to break up the standard media guides and programs (which, don’t get me wrong, I really love). Not sure what year this is from, but I’d guess sometime in the ‘80s. Also not exactly sure what that is Aubie is holding up to his mouth. Pretty certain it’s supposed to be a megaphone, but it’s not a very well-drawn one (maybe it’s just the angle of the photograph). Almost looks like he’s guzzling from a bottle. Anyway, it’s still a great item and the triple-R “Warrr Eagle” on the back is a nice touch.

That’ll do it for this week. For past editions, click here. Thanks as always to our contributors. If you’ve got a media guide (or anything else remotely Auburn related) that you’d like to share, please send a picture of it to [email protected] or @FearlessandTrue.