Trying to make any Auburn connection we can with the new breed of Television Is Better Than Movies shows out there is one of TWER’s many pet projects. We’ve got Mad Men covered, as covered as we can—tying in an old ad in the Plainsman with the episode with Peggy and The Relaxercisor was one of our first posts, and we’ve got the Auburn grad who dresses up like Joan, and of course we know that Don Draper is an Auburn Man.

As for the rest, we’ve lacked woefully… until—thanks to Christi Parrish—today.

Had we done more digging, we actually could have started feeling better about ourselves along these lines on Oct. 30, 2011. That’s when the third episode of season two of AMC’s critically-acclaimed zombie thriller The Walking Dead aired. Parrish, who graduated from Auburn in May 2011 with a Degree in Public Relations, was an undead extra.
“It all kind of started when my boyfriend and his best friend were watching the show and talking about the new season coming out and how awesome it would be if we all got on as extras,” said Parrish, who currently works in healthcare in Nashville. “His buddy ended up finding the website where you apply. We were all kind of joking about it.”

She got a call the next day.

“They said they needed a few more zombies and said ‘can you be here,” she says. “Here” was a hot high school in Newnan, Ga.

“It was supposed to look abandoned so they turned the AC off because they didn’t want any papers blowing around.”

Her scene took 16 hours to shoot. She’s on the screen for just 30 seconds, stumbling around under the burden of three hours worth of makeup and two dark secrets. The first? She was uneducated.

“You’re supposed to go zombie school and learn to walk funny and moan,” Parrish says. “I talked with some of the people who had been before and there are different levels of zombies. I was a base model zombie but there were people with prosthetics and (zombie) contacts and stuff.”

But the worst secret of all?

“I had actually never seen the show,” she laughs. “Obviously I didn’t tell anyone but I’ve watched religiously ever since.”

She’s also upped her zombie game. She and her boyfriend, Elliott Chenger, regularly participate in zombie-themed events in Nashville. They were even voted into the prom court at the 2011 Promocalypse. That’s pretty die-hard, as it were. And thanks to her 15 minutes of undead fame, her dark-alley cred is impeccable. 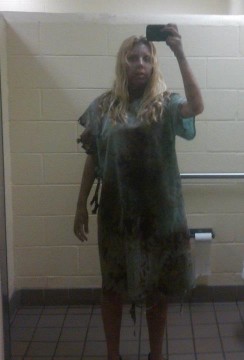 “[The Walking Dead] was a really fun experience,” she says. “My boyfriend was going to do it to, too. When they called and said they still needed extra zombies, I said ‘my boyfriend would love to do it.'”

However, Chenger, who’s also an Auburn grad, couldn’t pass the physical. Being 6″4 and 250 pounds is great for a hockey player—Chenger and Parrish are responsible for resurrecting Auburn’s hockey team from a 28-year hiatus (Auburn had a hockey team from 1979-82)—but apparently not for a zombie.

“They said ‘yeah, he’s kind of a healthy zombie. We don’t really need him.'”

“At first I was kind of honored to be picked,” Parrish says. “But when I got there everyone was really tall and waify and skinny. So why I got picked kind of wasn’t as much of an honor.”