What’s some cutesy, Auburny way to launch into it? It could have been one small step for an Auburn man…what if the War Eagle had landed? Whatever, I’ll just let the quote do the work:

“He said that ‘War Eagle’ could well be his first words if he were to be first on the lunar surface.”

That’s the Plainsman remembering Clifton C. Williams, one of the first of Auburn’s many contributors to the space program, in its July 25, 1969 issue, the first published after Neil Armstrong did his thing, which he did exactly 43 years ago today.

Williams graduated from Auburn in 1954 with a degree in mechanical engineering. He was commissioned as a Second Lieutenant in the Marine Corps and along with Buzz Aldrin was among the the third group of test pilots NASA selected for the astronaut program. (He was the only one who wasn’t married. When he finally got hitched, the press made jokes about space losing its only bachelor or something.)

He was on the backup crew for both Gemini 10 and Apollo 9, and was later included in the list of candidates for the first moon mission. But he never made it into space.

Williams was killed on Oct. 5, 1967 while piloting a NASA T-38 jet trainer. He was flying from Cape Canaveral to Mobile, his hometown, to see his father who was dying from cancer. Wikipedia says the plane crashed. The Plainsman says it exploded in mid air.

“I have high hopes for a flight just like everyone else at the center,” he told the Plainsman in 1966. “I feel that I’ll get a flight but I can’t venture a guess which one.”

At the time of his death, Williams was the lunar module pilot for the crew that eventually became Apollo 12.

“This is the most interesting and exciting job that anyone can have. Everything is pertinent to your success and safety. There are no areas to dislike.”

“C.C. was like everyone else in the program,” another Auburn-bred astronaut, Ken “Played by Gary Sinise” Mattingly told The Plainsman. “It was his entire life. He would have worked as hard to see someone else go to the moon as to make the journey himself.”

But if Clifton Williams had made the journey—had an Auburn man made that first foot print—there was apparently a very real possibility (at least real enough to tell The Plainsman), that on July 20, 1969, the world wouldn’t have heard some sentimental line about mankind,  it would have heard “War Eagle.”

The first words spoken on the freakin’ moon could have been “War Eagle.”

Here was my other one: Talk about controlling the Tide…

UPDATE: The Plainsman’s first story on William’s death makes it sound as if his mind was made up: 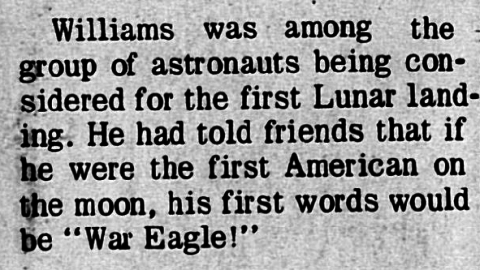