The Doug Barfield era was one of the less successful in Auburn football history. Barfield went 29–25–1 from 1976-1980 and only finished ranked one year. It’s not easy on a man’s legacy to have his career sandwiched between those of Shug Jordan and Pat Dye, the two most beloved coaches in the program’s history. Barfield, however, made his mark in other areas, namely fashion. Whatever he lacked in football acumen, he made up for with style. His teams sported the occasional orange jersey (that we have featured in past posts—keep hope alive). He handed out cool eagle helmet stickers called “weagles” (featured for the first time below). But perhaps his crowning achievement was the quintessentially ‘70s attire his staff sported in the program from the 1978 Tennessee Game. I don’t have the words to do it justice. Just take it all in. Fantastic. 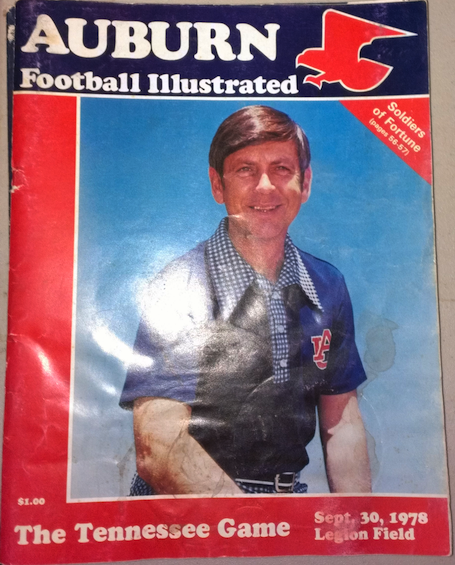 What we need now is a throwback game (against a nobody opponent, please) with the team coming out in orange jerseys and face masks and the coaches wearing these outfits on the sidelines. I mean, come on, Chizik was born to wear that shirt and VanGorder could easily go coif-to-coif with any of his predecessors. Luper could replace his orange tinted shades with P.W. Underwood’s classics. It’s almost too perfect. Someone in charge needs to make this happen. 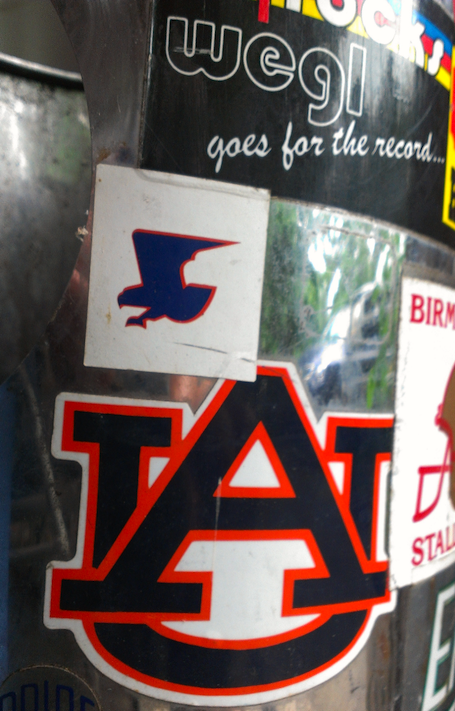 I’m neither pro- nor anti-helmet stickers. I like them for certain schools (I begrudgingly acknowledge that I like Georgia’s bones and Clemson’s paws), but I’m glad Auburn doesn’t use them anymore. I like the clean simplicity of our helmet and don’t want anything else cluttering it up. That said, these old helmet stickers are nice. I never even knew these existed until Jeremy featured the cover of the program from the 1980 Tennessee game a few weeks ago and someone commented that they were called “weagles.” I considered cropping down to focus on the weagle by itself, but I like seeing the other WEGL (the campus radio station) sticker above it as well as the slight glimpse of the possibly-soon-to-be-reborn Birmingham Stallions sticker. 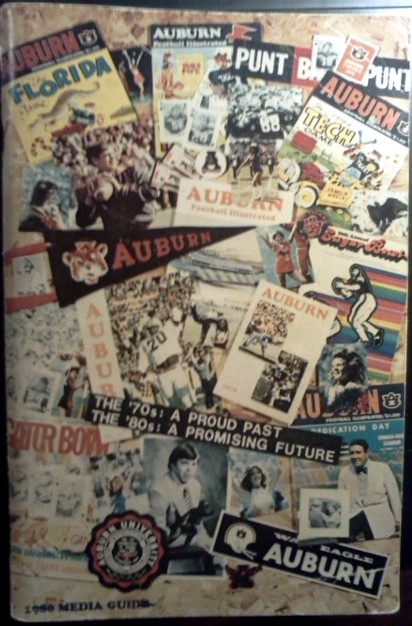 This is another item from Barfield’s tenure (the end, in fact). The media guide for his last season featured a collage of old program covers, memorabilia and the words “The ‘70s: A Proud Past / The ‘80s: A Promising Future.” Pretty good prediction considering it was made in the midst of a mediocre stretch and followed shortly thereafter by one of the most dominant ever.

“Here, as promised, is the old Auburn jacket that was my stepdad’s, and that I wear just about every game Saturday that’s cold enough. Every Auburn hipster is now EXTREMELY jealous of me… WDE.”

Past contributor Stephen mentioned this jacket in a comment to an earlier post and I asked him to send in a picture. He, and the jacket, did not disappoint.

In the first Relics, I showed you my own football playing Bo Jackson Starting Line-up figure. Here we have Bo wearing the beautiful blue uniform of the Kansas City Royals while playing his other pro sport. Once again it is not technically Auburn, unless like me you consider anything and everything Bo to be inherently Auburn.

That’s it for this edition (for previous editions, click here). Thanks again to all of our contributors, especially the very generous anonymous donor who submitted the 1978 Tennessee Program, helmet sticker and Bo Jackson Starting Line-up (and more items to come). Send in your own relics to [email protected] or @FearlessandTrue.