The more great stuff that comes pouring in from our amazing readers, the greater the temptation to package it into a unified theme. I’ve mostly resisted the urge because I don’t want to limit the scope of whatever it is we are trying to do here, or in any way discourage the flow of forgotten treasures by only focusing on certain items. Today, however, as I looked through my ever-expanding selection, I decided I had enough to put out a post of nothing but Iron Bowl. I’ve already touched on the series before and fully expect to revisit it (repeatedly), but here is a collection of Auburn vs. Alabama pieces from throughout the years. 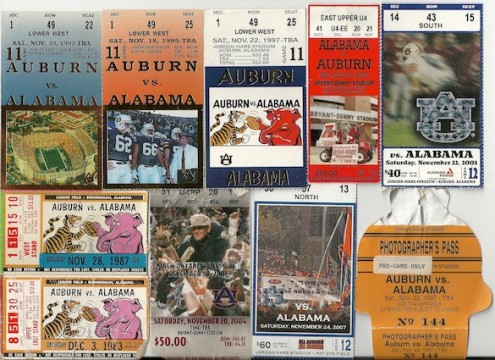 I love looking back at old ticket stubs. The art, the color, the antiquated prices (only $20 in 1993). It’s interesting to see the same art used in 1983 and 1987, as well as a slight variation in 1997 (now with “Jordan-Hare” on the football). The 1995 game ticket pictured was my first Iron Bowl as a student, though I had a generic looking student ticket punch card and not this handsome keepsake. Also note that every one of the tickets pictured is from a year that Auburn won. I’m sure that’s a coincidence. 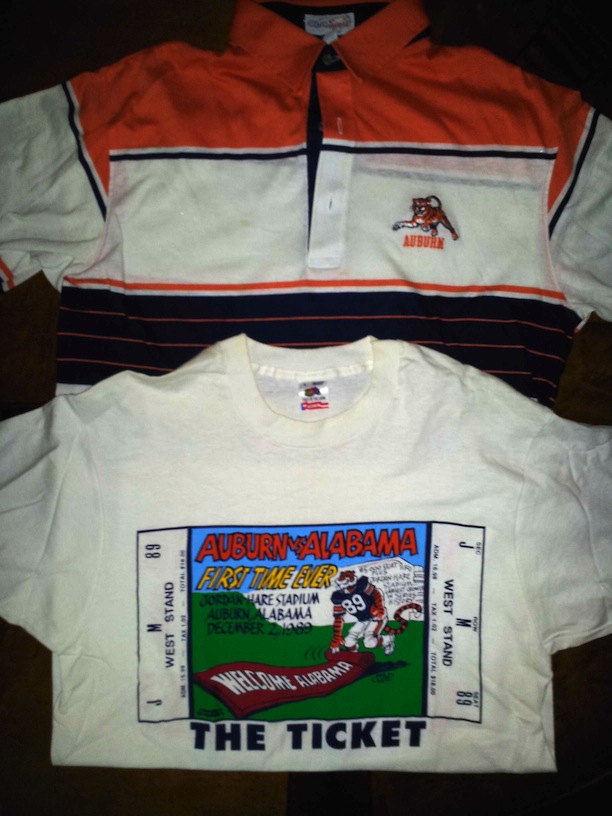 This t-shirt features the same great Neel artwork that was used on the game program and ticket and looks to be in excellent shape for a nearly 23 year old garment. While that is the item of note, I’m also digging the old school pouncing Tiger polo. 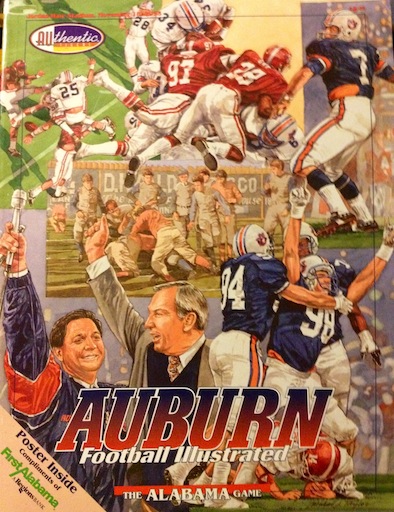 This one is from my personal collection. As mentioned above it is from my first Iron Bowl as a student (first ever, really). I didn’t buy a lot of programs in my poor student days, but this game was special. ESPN Gameday was on campus for the first time and I got up early to head over to their set outside of the stadium. The campus was buzzing and I walked around for hours taking it all in. I didn’t even realize I still had this until I did a little digging this weekend in my basement storage area and found it in a box of old college stuff. It’s still in pristine condition and features some of my favorite non-Phil Neel cover art highlighting great moments in the series.

“I purchased this outside Legion Field right after the game. It still has rainwater marks”.

A classic score-flaunting bumper sticker from the Tigers second consecutive victory against the Tide. Sadly, the “BRING ON NEBRASKA!!!” never came to be or we might have an extra National Championship banner hanging in our stadium. 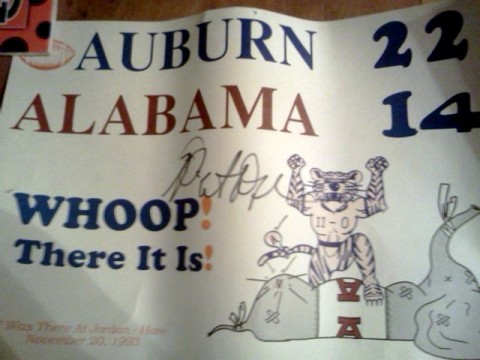 “My Dad got this after the game and then ran into Coach Dye. Even got a pic of him signing it.”

Another score-flaunting item from Terry’s Tigers’ undefeated season (do they still sell these outside of the stadium after big games? I don’t get to go to enough to know, sadly). Bonus points for the Dye autograph. Double bonus points for the “Whoop! There it Is!” reference. (That song will be in my head for the rest of the day now.)

“Not quite sure where it came from, or how old it is, but found this in a box of my step-dads things after he passed a few years ago. Love me some double entendre. WDE”

I’m pretty sure that bumper sticker says all that needs to be said.

That’ll do it for today, but we should be back soon with another edition (for previous installments, go here). Thanks again to all who have contributed. Please keep it coming ([email protected] or @FearlessandTrue).

P.S. The orange jersey streak may have ended, but the dream lives on.