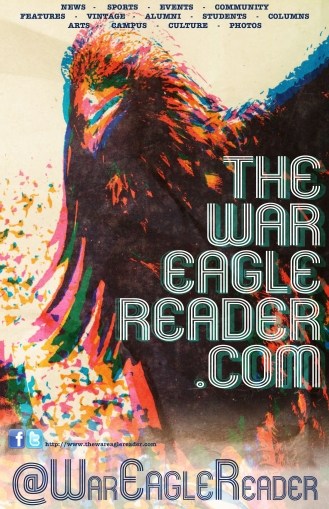 When I first came to Auburn, I wasn’t a journalism major. Writing wasn’t a part of the plan. Auburn — this university, this town — always was.

In high school, the only schools I even applied to were Auburn and, just in case, Southern Union. I had seen too much of Auburn, too much of its good, and too much of the type of people that it turned out to ever want to go anywhere else. Fortunately, the academics and the financials and the location all worked out, and I was able to go to school where I always wanted. I was lucky. I know a lot of people who didn’t get to go to their dream school.

But while I always knew I was going to go to Auburn, I didn’t know I was going to be a writer. I wanted to be an engineer, like my father and my grandfather. It made sense. I was good at that stuff. I had found my niche; I wasn’t going to do civil, like my brother — I was more mechanical. I could have done it, and I would have been damn good at it. And I would have made a lot of money, and grown up, and had a wife, 2.5 kids, a dog, and a white picket fence and all that.

I don’t know when it was that I realized I was going to write instead. I’m not sure when it was that I finally decided to listen to all those English teachers I had and everybody I had ever talked sports with and consider the alternatives. But somewhere along the line I realized that I was only going to live once, and that sports journalism, and writing, and traveling, and all of that, was the only life for me. And by the time I went to my advisor and officially changed my major in the spring of 2010, it was a long time coming.

And once I made that jump, there wasn’t much of anybody in the department that wanted anything to do with an indecisive freshman-ish kid with a nondescript high school GPA and a near-flatlined college one. It wasn’t the Opelika-Auburn News that gave me my first shot in writing. It wasn’t The Corner News, either, and it damn sure wasn’t The Plainsman.

It was The War Eagle Reader.

In March, Jeremy revealed a problem that we knew had been brewing for some time. Because of its growth, the site that was already struggling to get by was going to have to make the jump to a larger, more expensive server. To put it simply, The War Eagle Reader was in trouble.

Personally, The War Eagle Reader has done nearly everything for me. It was because of my start here that I’ve had so many other great opportunities in writing along with it. And school-wise, I’d probably still be trying to get into the department and drop the “Pre-Journalism” tag if it wasn’t for the bomb resume and clippings I was able to attach to my application.

But that’s not even why I want to call attention to the issue of TWER’s survival and bring it to the forefront again. My little story is nothing compared to why keeping this thing going is so very, very important.

The War Eagle Reader’s vision is unique. It isn’t just some college sports blog like you see everywhere else on the Internet. And it doesn’t limit itself to locality like so many things in print.

It’s an online magazine that captures everything that’s Auburn. And the reason it’s so tough to describe is because Auburn is so hard to define.

Even without official license or support, The War Eagle Reader captures everything that is “uniquely Auburn” — even if we’re not really even allowed to use that phrase. The reason The War Eagle Reader exists is because not everything Auburn is an official university-endorsed product. Who else would tell the stories of townies and alums long gone from campus, and Lord knows the counter-culture and conviction that the people of the university stand for, but that go against everything the university “officially” stands for?

Who else is there to celebrate what the university cannot, but the Auburn Spirit most certainly does?

That’s why The War Eagle Reader must not only survive, but continue to grow and thrive. The War Eagle Reader is something special, and so is Jeremy’s vision behind it. I knew that the very first time I met him, which was very accidental-like at the Chick-fil-a on Magnolia that the world seems to revolve around. It’s the same spot where my dad lived in the building before it (his second-story room window was right where the “C” in the logo is, he says) when he went to Auburn. It was War Eagle destiny, or something.

The War Eagle Reader is unique, and its genius and creativity can’t be duplicated. And still, it’s something that I can’t understand why others don’t take liberties from. But the truth is, even the most interesting and most masterfully-crafted pieces about old student dorms, classic campus traditions, and that time that band tore down that house show just don’t get the same amount of hits as an unoriginal “Top Five” slideshow about football, for whatever reason. Not only does it need to survive, but it needs to prove that something special like it can. In a world where media continues to change, places that provide quality writing about more than sports, and provide limitless opportunities and possibilities to high-caliber writers, need to be able to continue to exist and thrive, even without the backing of a larger blog network.

That’s why I support this site with a subscription. And you can too, whether it with a one-time or monthly donation, and in whatever amount you can — or whatever amount it is you’re giving the other guys. Just consider the amount of content you get from The War Eagle Reader — the columns, the reports, and the stories you get on sports, vintage culture, Toomer’s Corner, and everything else that you just don’t get elsewhere — and consider it.

And if you can’t right now, or you’ve got to stop for a while, that’s cool. The War Eagle Reader will always be here (hopefully), never demanding cash or hiding behind a paywall, free of charge for everyone, because of the support from readers like you.

Meanwhile, to get back to me, I’ll continue to contribute to The War Eagle Reader in the best way I know how, with my writing. Sure, I’ll take my opportunities as a stringer with the paper, and I can’t wait to get started on my summer gig with The Corner News. And, sure, one day I’ll probably end up helping out The Plainsman, too.

But no matter what happens, for as long as I’m in Auburn, The War Eagle Reader will always be home.

And, no matter what happens, for the rest of my life, The War Eagle Reader will always be the place I got my first shot.