Several weeks (months?) ago I tweeted out a few pictures of old Auburn T-shirts that I’ve been holding onto since my school days during the Terry Bowden era.  A ‘95 Camp War Eagle shirt that is no longer suitable to wear in public.  A ‘97 Dameyune Craig Heisman campaign shirt that, to my knowledge, was never mass produced.

Over the next couple of weeks, I sent out pictures of a few more items that I dug out of my basement storage area.  The response was great.  People started sending me photos of their own Auburn collectables.  Great old shirts, schedule posters from the ‘80s, and more.

The idea to start a regular/semi-regular post on TWER to share some of these treasures was born, but schedule conflicts and life in general got in the way.  Now that spring practice is over and A-Day is in the books, it seems like as good a time as any to generate some good old user-submitted content.  I’ll get things started by sharing the items I mentioned above (and a few more), but to make War Eagle Relics work, we really need your help.

If you’ve got something old/unique/quirky/rare/whatever – send it to me and we’ll share it with the Auburn world (or at least the part of it that visits this site, which is the part that seems to enjoy such things).  Let others enjoy the borrowed nostalgia that seeing a piece preserved from a bygone era can bring, reminding them of their own carefree days on The Plains.

You can tweet me the pics (@FearlessandTrue) or email them to me ([email protected]).  Please provide a little context if possible (What year is it from? Where did you get it?) and let me know how you’d like to be credited for your submission (name, @handle, anonymous).

I can’t wait to see what you all have tucked away in your own basements or proudly displayed on your bookshelves. Now to mine. 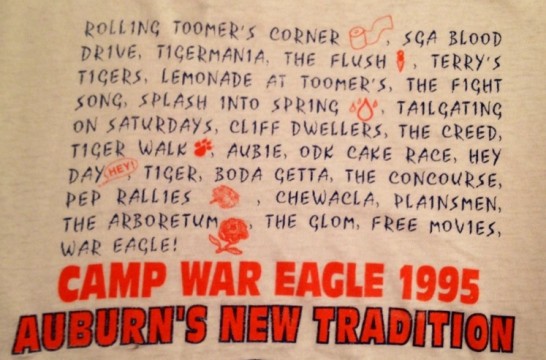 This was the shirt given to all students at the first Camp War Eagle in 1995, which for this incoming freshman from South Carolina was a very memorable experience.  It was only the second time I had ever been on campus and so much of what makes Auburn special was introduced to me at that time.  Maybe that’s why I have found it impossible to get rid of this shirt after all these years. 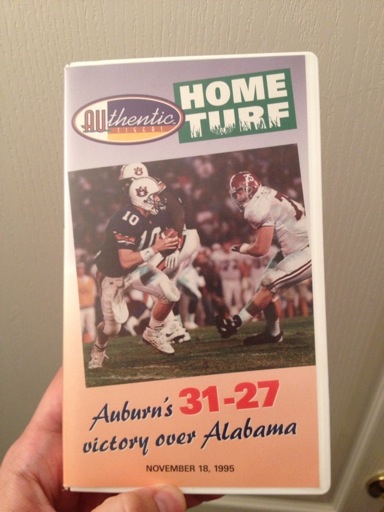 I no longer own a functioning VCR, but I will never get rid of this video.  My first Iron Bowl as a student. 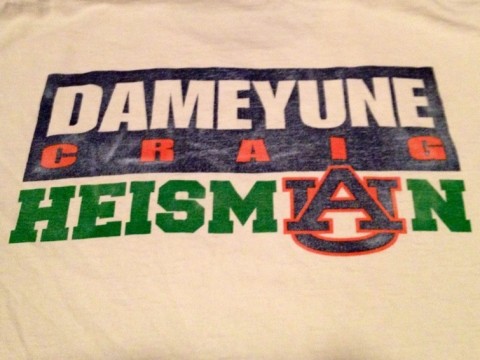 This shirt was given to me by a friend who was a Tiger Host during Dameyune Craig’s exceptional senior season on The Plains.  I believe they were produced by the athletic department and were never made available to the public once it was evident that the odds of DC making it to New York were not good.  It’s probably my favorite Auburn shirt ever. 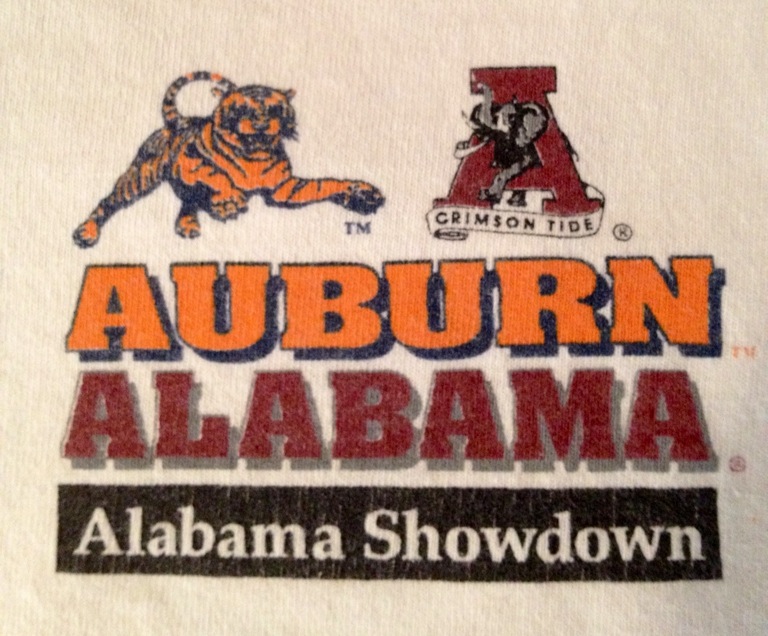 This was an unlicensed, long-sleeve t-shirt that was sold on campus prior to the ’97 Iron Bowl.  I love that old pouncing Tiger logo and the memory it invokes of Bama fumbling away a sure victory while I watched from the student section. 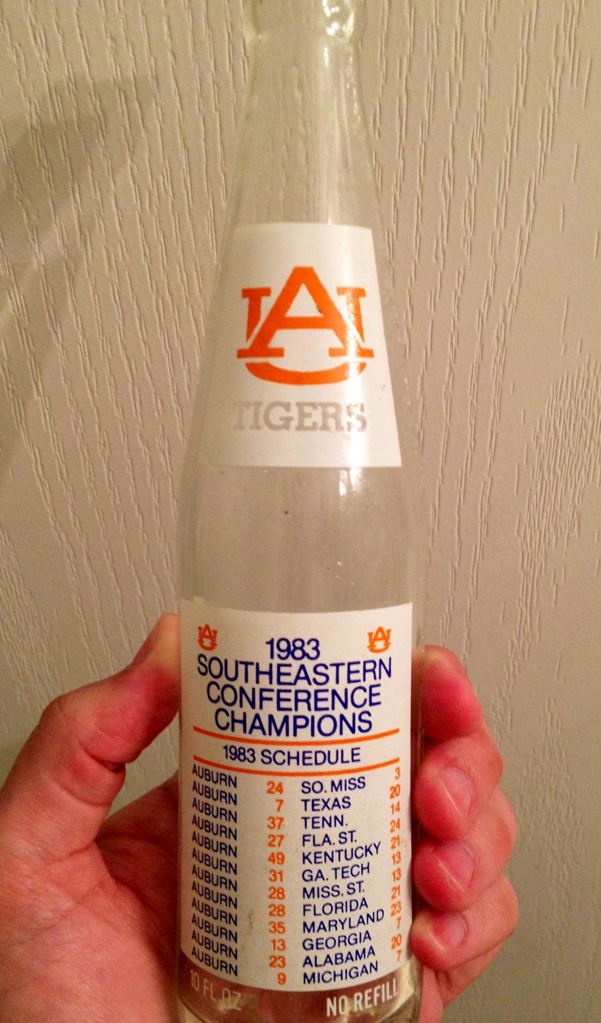 My wife found this at a flea market in Texas (damn Longhorns) several years ago and picked it up for me.  The nightlight part broke off during one of our moves, but I hang onto the bottle so that I can look at that amazing schedule whenever I need to remember how great that year’s team was and how badly they were screwed out of a national championship. 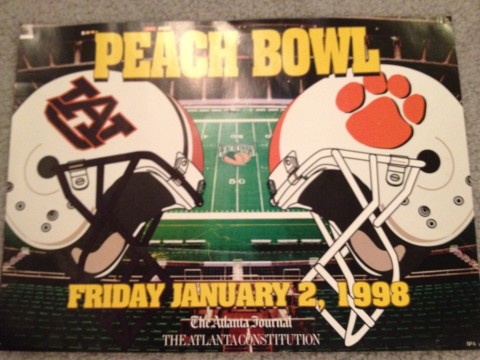 I think I paid a dollar or two for this outside of the Georgia Dome leaving the Peach Bowl, my first bowl trip ever.  The game was my second visit to the dome in a month following Auburn’s crushing one point loss to Peyton Manning and Tennessee in the SEC Championship Game.  It was also my first chance to see my Tigers beat a Clemson team I had grown up hating in the Palmetto State.  I don’t think I noticed for years that the Clemson helmet is white, which was not the case on the field. 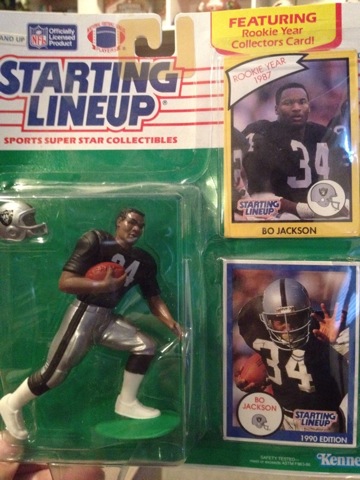 This isn’t technically an Auburn collectable since Bo is in his Raiders uniform, but the day a Bo collectable isn’t considered Auburn enough to include in this post is the day I close up shop.  I’ve had this since I was a middle school sports fanatic and never opened it hoping that it would one day be part of my vast sports card fortune.  Since it is currently available on eBay for less than $5, I opened it and let my four year old son have it. Coupled with the #34 Auburn jersey he wears all the time, he now loves Bo despite being born 22 years after he won the Heisman.