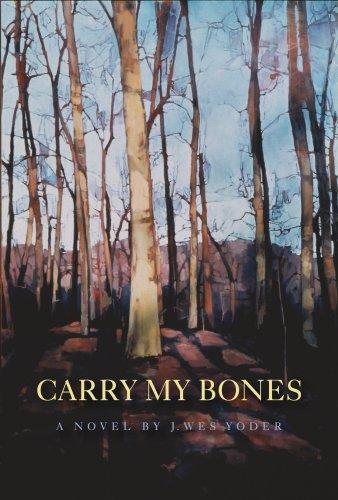 Auburnness: So much. Yoder is an Auburn graduate and the novel is set during the 2003 Auburn football season.

“Auburn’s been winning though. Beating up on Vandy and a bunch of nobodies. We’re 5-2 and the paper said Cadillac’s been player of the week for about a month. We’d be 2-5 without that boy and you know he’ll just go turn pro at the end of the year. Poor kids always leave early.”

Auburn beat Alabama. The game ended a while ago, 28-23. Half the state is happy. The other half gets to feel that, for one night, the only thing wrong is a football score. Cadillac Williams thanked the Lord.

Auburn, town and University, has several mentions, as does Opelika, Shorter, the Syrup Sop, etc. The novel never leaves Alabama. 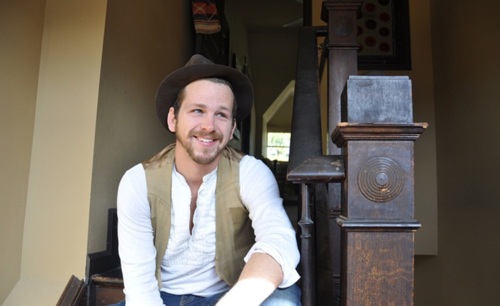 First, let it be known that this is an attractive book. The cover is an almost impressionistic painting of a forest of leafless trees. The painting looks like a photo. But it’s not. Brushstrokes can be seen. Lines get wavy here and there. Some swirls and such. The painting resembles the view of an Alabama highway’s edge in late fall or winter. The sky is a light, light blue and the trees are an off-white, yellowish hue. The font color is a back-and-forth of light yellow (like the trees) and a blue just a touch darker than baby blue, which works well. If the sky was full of thunderclouds and darkness, or if the trees were thicker and full of foliage, the forlorn landscape would appear uninviting and dangerous. There’s something undeniably claustrophobic about a thick forest at night. But the trees are sparse and bare and the viewer’s vision is immediately drawn to the distance and its blur of white and blue. We’re in the woods (notice the shadows at the bottom of the cover), but we can see an escape. We’re lost, but found is only an upward glance away.

We know a book and its cover are not one in the same. But an understanding of Carry My Bones starts with the cover. Like the cover, the novel is a matter of looking down—at the earth, at trees, at human debasement—or up—at the sky, at the heavens, at God. Like the cover, the novel’s language is sparse but hinting at depth. The plot is at once dark and light, serious and funny. But the tension, the driving force, more than any plot points of murder and escape, is that of lost and found, light and dark (or light and grey), sin and forgiveness. It’s a matter of woods and sky. Which is to say: It’s a battle between earth and heaven. It’s a Southern book, “Christ-haunted” as the rest.

The narrator, the “I” of the novel, is Merit. He is the adopted son of a banker turned sculptor turned attempted murderer named Gideon Banks (or Gid). Merit’s best friend is a 74-year-old black turnip farmer named John Frederick Templeton White.

The plot, as well as the characters, start moving after Gid, Auburn fan and backwoods Alabama folk artist who spends the beginning of the book traveling around the state with a quarter-defecating statue of what can be assumed to be former Governor Bob Riley (Gid opposed Riley’s attempted $1.2 billion tax increase in 2003), finds his often-spiteful wife consorting with another man in the back of his wife’s car. Gid shoots this man in the head. He believes the man dead. Gid, along with Merit and John Frederick, who has a car, set off into the Alabama woods with vague plans to either escape north, south, or lay low. Merit on Gid:

From there, once the group starts moving, the novel turns into a gentle picaresque. Yoder doesn’t so much satirize the South, as is typical of a picaresque, as Toole did with A Confederacy of Dunces, as much as he offered what mostly appears to be an earnest portrait of, say, gas station sausage biscuits:

When I got back, the grease from the biscuits had wet the sides of the bag. The biscuits were the square kind that fall apart at the corners and the sausage was spicy. The whole thing had taken on the character of the heat lamp, and I ate mine happily.

Music played on the speakers, and the place was busy. I took it easy through the crowd. A granddad was playing checkers with his grandson. The checkered rug was draped on a wooden barrel and the grandson was frustrated for having played into traps. he pushed his fingers in his cheeks. On the swing, a grandmother sat with her granddaughter and rocked. And the girl was told not to rock too fast. I walked past girlfriends and boyfriends holding hands, and young mothers smoking cigarettes, and truck drivers reading newspapers, and an old guy sleeping off a meal while his wife shopped in the general store, probably. A boy tried to climb the porch post. And another left his jacks on the concrete and bounced his ball to the porch ceiling.

We passed a community college where Gid said all the girls who party too much at Auburn get sent.

Don’t nobody really live in Birmingham. Some work there, some look for work, but they all stay on any of a hundred hills that they have given other names. I have heard that if two people from Birmingham meet, one won’t ask the other “Where do you live?” but, “Where are you from?” And the other will say Hoover, Trussville, Irondale, Vestavia, or someplace else you could drive in five minutes.

Some of the descriptions of Alabama circa 2003 have a biting edge, which is a little caustic, a little point-and-laugh. But it feels like a loving edge, like the truth of one family member telling another family member he’s getting fat and needs to stop enjoying Wendy’s dollar menu nightly.

These descriptions are what drive the book. Yoder’s prose, presented as Merit’s narration, has a nice cadence. It’s the particular cadence of Southern writers, a wisdom drawn out of the silence of fishing and cicadas and living three miles from the nearest neighbor. It’s the particular cadence of Southern speech. Yoder has a good ear; he understands the rhythms of language.

We walked on into morning and climbed up under an interstate bridge. Gid started reading the graffiti, shouting against the noise overhead.
“Jesus saves,” he shouted.
“That’s right,” John Frederick said.
“For a good time call Sally.”
“All right.”
“Foreigners go home.”
“Yeah. Come back home.”

The cadence of travel gets interrupted in Part Two. The first half lulls the reader. It’s a good lull. It’s the gentle rocking of a train or the bumping of truck on dirt backroad. And then the book stops, and we’re stuck in Birmingham. It’s not the worst thing ever, being in Birmingham suddenly, but the reader, this reader, wanted Merit, Gid, and John Frederick to keep moving, to walk toward some indeterminate tomorrow with never a glance back.

But you look back. That’s what you do. You stop, you look around, and you realize what’s before and behind and you pray, to the ground or the sky, for the ability to keep moving. You think about time, because you must, as Merit thinks:

But time never troubled me. The sun rising couldn’t order my life, and there was nothing new about another year. I kicked my feet out in front of me and I wished for nothing.

Two days of sitting around. I can see twenty years play out before me in a minute. Then I can come back and do it all differently. It was better when I was content to kick my feet and bump around. When I didn’t care the future was forested.

Which makes a reader, this reader, think maybe the most important movement in Carry My Bones was internal. Maybe Merit grew up.

Shout out to TWER reader Shawn for the suggestion.