J. Wes Yoder’s Carry My Bones, most recent read of The LiterAUti, is the novel Terrence Malick would write if he was 40 years younger, grew up in Tennessee, and attended Auburn. Merit, the novel’s narrator, is a mash of Sissy Spacek in Badlands—with her short, simple declarations and naive yet profound innocence—and that kid from The Tree of Life, running through fields and suburbs, doing his best to duck angrysad Brad Pitt’s jaw/open-hand-to-the-face combination.

Right? . . . Regardless, here’s an email back-and-forth with J. Wes Yoder on the South and its silence, the suffering and surety of youth, and why he’s glad Malzahn’s gone.

Were you an Auburn fan before attending Auburn, or was it a conversion situation? 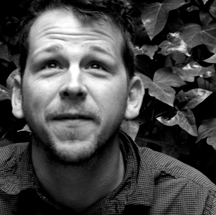 I chose to go to Auburn because a friend of mine who had bad grades got accepted there. And I guess I felt the least uncomfortable there compared to the other places I visited. I wasn’t a fan, although I liked Takeo Spikes when I was in high school. I wore his number. I remember learning the cheers at orientation (do they still call it Camp War Eagle?). I found them so embarrassing, and even though I liked the team I wouldn’t say War eagle. I don’t know how it all changed, but I know there’s an artist girl in Brooklyn who’s never watched a football game in her life who knows Bodda Getta by heart, thanks to me.

Why writing? Or perhaps, when did you decide it would be writing?

I was in the business school, and was very bored and never went to class. If I did go I took a newspaper and read the sports page. Then I started venturing into the other sections. I was sitting in one of those auditorium classrooms in the business school one day and decided that if I liked reading the paper, I might like writing it, so I walked out and went over to the communications building and that was that. Around the same time I started reading fiction. I’d never done that much before.

Do you have a favorite writer? Favorite novel?

Borges is my favorite writer. I feel pretty comfortable saying that, but I can’t pick a novel.

Do you consider yourself a Southern writer?

In the beginning I did, but I haven’t for some time. Probably most of the parts about Carry My Bones that make me blush are parts I wrote as a ‘Southerner.’

Who or what do you consider your influences?

When I look back at that book I see it was influenced most by two people I spent a lot of time with when I was 22 and 23. They are the artist Butch Anthony, and the writer Rick Bragg.

Yeah it was 2003. When I conceived the story I was living in Anniston, working for the paper there. I had no idea how to write a novel. One of the big challenges of a long narrative is timing. Writing a wandering story helped with this. I could imagine a map of the state and lay the stories across it. And pacing it across the length of a football season, or a fall, helped too. I think those are the main reasons. Although I also remember wanting to write about the place I was living, not as it was before, but as it looked and felt at that time, when I was 23, driving around on a rural counties beat looking for stories, and not finding too much that could go in a paper, but finding a lot that resonated with me.

The epigraph of the novel is “Meanwhile we groan,” a quotation from St. Paul. How does (or perhaps how should) this frame the book?

At the time I was impressed with my own suffering. I was uncomfortable, and I thought just about everyone else was too. When I was done with the first draft I saw what I had made, a bunch of folks who were trying to get out from under some weight, and I saw myself in each of them. The quote from St. Paul matched my mentality. The tone of that verse is depressing, mainly because what follows in that text seems to say that all of our days will be as such until our physical deaths. At the time that was an assertion I felt forced to accept, and I think in some way the book states that assertion.

“At the time I was impressed with my own suffering.” Do you think this was a youthful phase? Being impressed by your own ability to suffer and then acknowledge that suffering?

Well for me it started happening in my early 20’s, this amazement at how much of my life was struggle. I think it happens for a lot of people in adolescence, so I felt like a late bloomer. But yeah, I do think it’s a youthful phase, whenever you come to it.

A big theme of Carry My Bones seems to be silence. The reader learns Merit spent a large portion of his youth in silence because of a tragic event. Do you consider his silence indicative of your own personal feelings? Is becoming comfortable with silence a characteristic of life in the South?

I think somewhere in childhood you learn how to silence things—feelings and emotions—and with them go much of the physical noise around you. You become more and more desensitized, both inwardly and out. Becoming sensitive again is frightening, and it takes some luck and grace and courage to do it. I think this is where Merit ends up in the story; facing the fact that his old protections have fallen away.

I think becoming comfortable is a process folks are going through everywhere. Something inside of us seems to want to be restored to that earlier time before we were afraid. It’s not really silence, that, but it is quite spacious. It’s a good thing, it might even be innocence and salvation, but we kick against it. I guess there’s a Southern way of kicking, or of wearing that struggle. And I do observe that it’s easier to spot a person who’s become comfortable with that space when you’re in a rural part of the world. It’s a dignified sight, and you come across it sometimes, especially among folks who are close to the land. Maybe having less distractions on hand is
helpful.

How closely do you connect to Merit?

I didn’t think of this at the time, but now it occurs to me that if I connect to him it’s in the sense of Alabama being the place, (and particularly the rural areas) where I started to come into a bigger appreciation of things. I’d spent a lot of time getting off campus, trying to distract my restlessness in long drives, and then the time at the paper in Anniston was was lot like that too. Somewhere out there all the boredom of my youth started falling away, and I got the hint that I knew very little of the world, and I seemed to have no choice but to start looking into things. For Merit, those same landscapes and people he meets are the things that make his former isolation impossible for him.

Did you befriend a John Frederick type while you were at Auburn?

I did. An old man in Russell County who was also an artist. I don’t think we were really friends. But I’d go visit him, hang around, and wait for him to sing a song or tell a story.

Do you consider Carry My Bones a successful novel?

I never got satisfied with a draft, but I got to a point where I felt incapable of improving it, and that’s when I let go of it. I can see it as a success or a failure, depending on the criteria I select. I guess I should say there’s almost nothing about the work I’d defend, but I’d take up for the kid who wrote it.

Anyway, Auburn will win and the final score will be put on T-shirts that people will wear to rags. These will be some graphic of a tiger humiliating an elephant. But the feeling will be gone in a few days. Everyone will be back to counting their money, and their children, and their mistakes. They will only think about this game when they need a little pride. But it won’t help much. And the rivalry will sleep until the papers predict the winners a year from now, and people waken again to the persistence of loss.

Do you find it hard to not get angry about the sad situation of much of the South when the Iron Bowl and college football is treated as such an important issue?

I used to get angry about it, and probably I was when I wrote that. Once I started to get the hint that I too am always trying to distract myself, well, I stopped thinking it was my problem to worry about the South.

Are you working on another novel or any other writings?

I’ve been writing a novel for six years and I don’t have anything to show for it. I always start over. I can’t seem to write anything honest. The language always ends up squirly, full of vanities and charms, or else just lifeless. I don’t know if I’ll ever make another novel. Sometimes I announce happily that I’ve given it up. Then a few weeks later I think, ‘Oh, it’d be lovely to write a novel. Novel’s are so nice. Why not give it another go?’

Casually. I don’t read blogs or anything. But I watch the games. I’m glad Malzhan’s gone. I hated the look of that tricky shit, even when it worked.