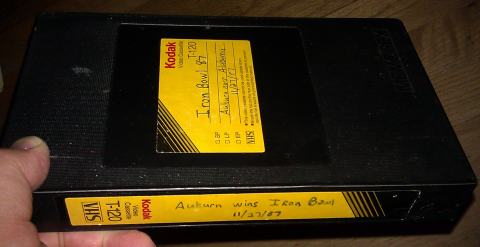 My mom’s friend recorded it for us and put the tape in the hardest, most protective, most perfectly labeled VHS clam shell you’ve ever seen and I watched it over and over again. It was a morality play with “Falcon Crest” commercials. It was my background music. It was my Saturday morning. It was my Saturday night. I have it memorized.

I was there. It was my first. I was 8. It was time. Dad. Legion Field. Birmingham. Baptism. Good. Evil.

Good kicks a field goal to go up by 10 with, like, a minute and a half left. Evil hasn’t even scored–but Evil has the ball.

And so it did—“A final disheartening blow for Alabama”—and many lessons were learned. For freshman quarterback Jeff Dunn, don’t throw over the middle to a guy with the most Clay Whitehurst sounding name ever when you’re desperate to stop the clock. For me, don’t celebrate the death of an opposing team’s player. And I truly thought Clay Whitehurst was dead, and with him, any chance of Evil winning. I shouted! I cheered! Ding Dong! Kurt Crain!

Dad put his hand on my shoulder. “Don’t do that, son. Auburn people don’t do that. See what Kurt Crain did? He didn’t point or laugh at him or stand over him. He just tackled him and got up and jogged to the sideline.”