Curse you publication lag time! And curse you, too, coincidence—on the very day Kevin Scarbinsky assuaged the grief in our Auburn hearts (re-wounded last week during Michael Dyer’s classy, Twitterific performance on the stand during the Antonio Goodwin trial) with a column headlined “More Evidence Auburn is better off without Dyer,” we crack open the just released 2012 Glomerata to a full-page photo of… Michael Dyer (the pages aren’t numbered, but starting with the title page, it’s the 8th). Thankfully, there’s no mention of the tainted No-Whistle Missile in the accompanying copy, which was about letting go of the past to enjoy the present. 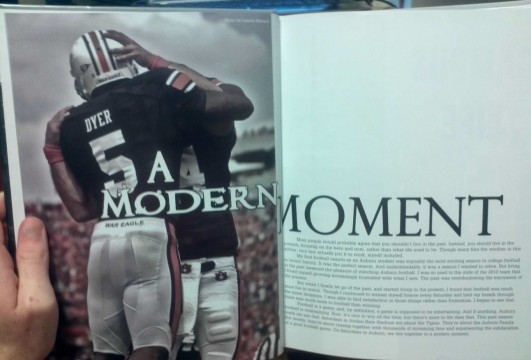 We’re all for second chances and stuff, but just be prepared to stop the presses, WolfTracks.

Related: Sorting Dyer from the mire.