So last week there was an email sent to Auburn students about Auburn’s parking situation, and some of the students whose opinions dot our timeline were absolutely losing their Twit. Lots of cussing and thinly-veiled threats… it had something to do with higher prices, but fewer spaces or something… and something about fro-yo. I don’t know specifics. But I do know that, generationally speaking, y’all are not alone.

Parking has been a problem on Auburn’s campus forever. And ever. And ever. Gripes about parking were as prevalent in The Plainsman in the 1950s as cigarette ads, as numerous in the 70s as skin flick specials. Ditto the 90s. And the complaints typically doubled as accusations that students were being bilked in a bad-parking-is-good-business kind of way. Despite the recent arrival of Tiger Transit—or possibly because of it—the number of parking tickets issued halfway through the fall of 1997 was almost quadruple the number issued the previous year. Sure, there may have been other factors, but The Plainsman’s staff cartoonist captured student attitude toward parking services that fall thus: 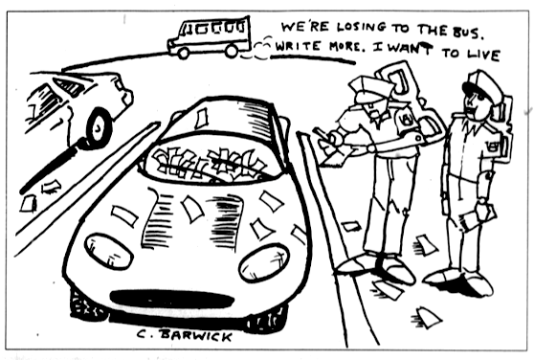 I thought it was funny. These days the kids just tweet AU Parking Service’s logo Photoshopped with a Bama A.