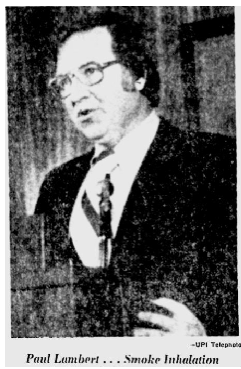 Last Sunday night, Frankie Sullivan was awarded the Paul Lambert and Tommy Joe Eagles Memorial Trophy for leadership for the second time in his career.  The award is the highest honor given by Auburn’s coaching staff and has been awarded to some of the best to play basketball for Auburn since it was created in 1990, including Marquis Daniels, Daymeon Fishback and Kenny Gabriel.

Those names are familiar to anyone who has followed Tiger hoops for the last two decades, but the two names engraved above the winner’s on that trophy may not be quite as well known.  Who were Paul Lambert and Tommy Joe Eagles?

Eagles is easily the more recognizable name of the two.  The former head coach is likely remembered by many Auburn fans in part because of that great name – surely “War Damn Eagles” was beat into the ground – and his relatively recent tenure.

His five years on The Plains from 1989-1994 produced little on-court success (his record of 64-78 and a single NIT appearance was sub-Leboian), but he did begin the annual tradition of a year-end awards banquet that included the award that would later carry his name.

Eagles left Auburn for the University of New Orleans in 1994 where he died unexpectedly of a heart attack at the age of 45.  He never coached a game at his new school.

Tragically, this mirrored the fate of the man whose name he had chosen to grace his most prestigious award.

Lambert came to Auburn in April of 1978 from Southern Illinois after 8 years as the Salukis’ head coach. He had recently guided his ‘76-77 team to a Missouri Valley Conference co-title and a tournament run that took them all the way to the Sweet Sixteen.

As he prepared to make the jump from MVC to SEC, his promising career came to a horrific end.  Before he could even coach his first practice at Auburn, Lambert died of smoke inhalation in a hotel fire on June 6, 1978 in Columbus, Ga.  He was 43.

Lambert had planned to move his family to Auburn the week of his death.  Instead, Auburn lost its coach and, much more importantly, a family had lost its husband and father.

They may not be the first two names one thinks about when it comes to Auburn basketball, but thanks to the award that bears their names people will continue to ask the question:  Who were Paul Lambert and Tommy Joe Eagles? Two Auburn men gone well before their time.