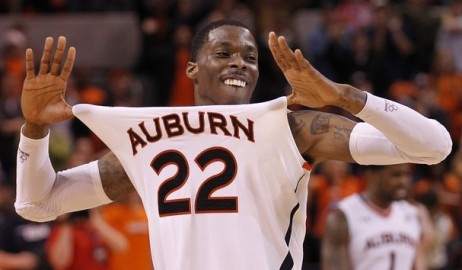 The 2011-2012 Auburn basketball season is in the books, and in the end it wasn’t exactly everything that Auburn supporters had hoped for, nor everything that it could have been.

Despite a stellar home record, Auburn’s woes on the road were just as extreme. For every moment of inspired play out in Hawaii, or for every solid win against ranked opponents like Mississippi State, the season saw its share of disappointing performances and near-rock-bottom moments. Just as Auburn had a habit of going on scoring droughts in each game, the 2011-2012 season wasn’t without its slumps and losing streaks.

And just when things were seemingly looking up midway through conference play, a line of bad breaks, injuries, and suspensions ruined the Tigers’ chances at finishing with a .500 or a near-.500 conference record.

But through the season, Auburn played with resolve. They established what works and what doesn’t with a core of returning personnel— and within Tony Barbee’s system—and ended the season with more to look forward to than they did this time last year.

2011-2012 will ultimately be remembered as a rebuilding season, and while we won’t know the results of this project for some time, everyone can see the progression that this team made throughout the season, and that they’ll be set to enter next season more prepared and with more under their belt than they’ve had in years past—and with a large, new signing class stocked with players who can possibly make an immediate impact. For Auburn fans, that’s stuff to get excited about.

Another thing to get excited about? The return of Frankie Sullivan, who intends to return for his redshirt senior season. Since he’s already earned his degree, and after he attempted a return in the middle of last season and was only forced to take a medical redshirt after his knee wouldn’t cooperate, some (well, me) had begun to wonder whether he would try to enter the professional ranks overseas like other recent Auburn basketball alums and cash in on the game while he’s still young.

Frankie’s return is obviously huge for Auburn–it’s actually about as big as it can get for this team. But now isn’t the time for that story, or for any other newsworthy issues currently surrounding the basketball program.

Instead, it’s time to recognize what’s been done and what has been accomplished, and what has made the program’s potential to move forward even possible.

Graduating senior Kenny Gabriel and the rest of the class of 2012 will leave the Plains with a unique legacy. Over the last two years, Gabriel, along with Adrian Forbes, Tony Neysmith, and Jake Drum helped undertake a rebuilding project that saw a program start fresh with a new head coach, a new vision, a new image, and even a new gymnasium, and attempt to rebuild from nearly the ground up in a major conference.

In the first two seasons of Auburn basketball in the Aubur Arena, Gabriel and company might not have won every game they wanted or needed to win, but they did build a foundation that Auburn can win on in the future, and gave Auburn basketball an identity again. Suddenly, Auburn is that high-flying, showman-like team that can go toe-to-toe with almost anyone at home, even when they struggle on the road. Suddenly, Auburn has a face again, or at least it knows what it wants to be. It has a vision.

Maybe that isn’t that great, and maybe that was going to happen one way or the other, but it’s an accomplishment. And that’s the legacy that these seniors and the teams that they’ve led onto the court over the past two seasons will leave; that they’re the first team to take the floor at the new Arena, and they’re the team that built it.

Adrian Forbes, the import from Spanish Town, Jamaica, came along especially well later in his career, finding his place as Auburn’s charge man, a switch man that could defend almost anyone on the court, and played in every spot the coaches asked him to. Forbes could find ways to play with any bigs he went up against his senior season, most memorably standing tall against the giants of Kentucky inside when the Wildcats came to Auburn. Forbes ends his career as a model effort player that found ways to make an impact on the court and frustrate his opposition. He should be remembered as nothing less.

Jake Drum got serious looks and minutes more towards the beginning of his career, and will more than likely be remembered for doubling his duties to Auburn athletics by walking on to the football team as a wide receiver. Drum seemingly helped Auburn in every way he could, and he has teammates on two different teams now that will tell you that.

Tony Neysmith came to Auburn after transferring from Oklahoma, and while he found his way in the lineup often, he was never really able to establish a rhythm his senior season. But in his junior campaign, he contributed greatly to a bare-bones, stitched-together back court, and helped the Tigers improve their play and close that season strong. His size for a point guard and use of it on the defensive end made him valuable for the Tigers, and he’ll be missed amongst the Tigers’ guards.

Finally, Kenny Gabriel won’t be forgotten on the Plains in a long, long time. His high-flying dunks are what will stick in everyone’s mind, but just as appreciated by Auburn basketball supporters will be his effort on both ends of the court, the time he put in in the offseason to clearly improve his defense and blocking ability, and most invaluably of all, his leadership.

It was in 2010-2011 when four senior, long-time starters graduated, lone returning starter Frankie Sullivan went down with an offseason injury, and during a coaching changeover and staff overhaul, that Gabriel stepped up and became the leader of a pedestrian team, and continued that leadership through his senior season. With his help, Auburn was able to not only tread water in some of its toughest times as a program recently, but thrive in different ways, generate new excitement, and set the team in a strong position moving forward. And he’s left his mark on the university forever by becoming the first player in the history of Auburn basketball to record a triple-double. That can’t be taken away.

Auburn basketball might not be the same for the first few games of 2012-2013 without Gabriel on the court, but he may have just set the mold for the type of player and Auburn man, on and off the court, that this coaching staff will be looking to bring in and build teams around for years to come.

And as for Gabriel himself, he’s a gifted player with all of the talent in the world in his sneakers, and as he moves forward in his career there will be no shortage of clubs around the world that will want him on their side. His career at Auburn may have come to a close, but Kenny’s a rare talent and a hard worker, and the game of basketball will be a part of his life for as long as he wants it to be.

For Auburn, they’ll be moving on without Gabriel, and the rest of the class of 2012. But thanks to this class, Auburn will be in a fine position to make a name for itself in the process of building into a strong program. It won’t be easy, and a return to former glory isn’t going to come overnight. But the Tigers are on the right track.

For Tony Barbee and his team, the next step might just be finding another one like Kenny Gabriel.