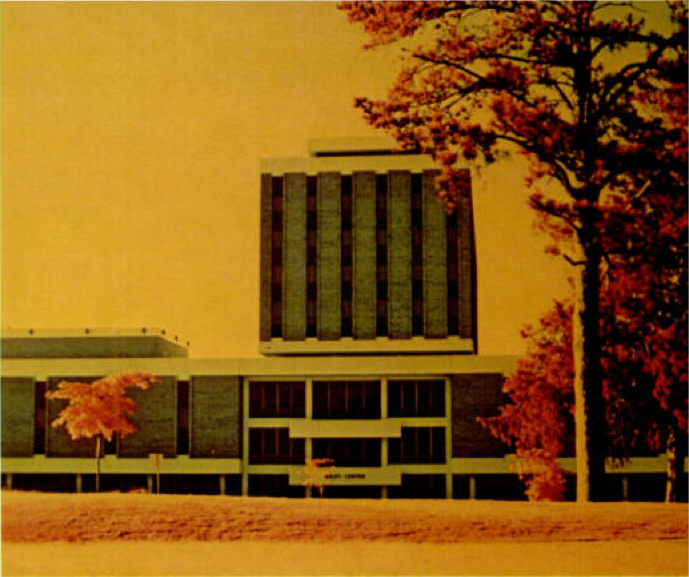 I realize Auburn is beautiful. I was reminded the other day when I returned. It was early March. I was wearing a T-shirt. I believe it was black. The sky seemed to be blue. The sun appeared yellow. I saw a brown dog. I believe it was a big brown dog.

At Auburn, I know I’ll see coeds jogging and yammering and walking alone and in twos and threes along Dean and College and Donahue, blond, brunette, black hair framing loose shirts and tights pants, moving with surprising purpose on obviously purposeless Monday and Wednesday and Sunday afternoons in the spring and fall. And I’ll see two guys who’ve had beards since 10th grade triangulating a Frisbee adjacent Samford with a shoeless guy in a flannel shirt. There will be a light breeze to undercut the humidity, hitting faces like waves on beach. A Tiger Transit bus will chug down Mell past the library with its one afternoon passenger staring out the darkened third window with a look somehow absent and absolutely present. A tall black truck will roll uphill opposite the bus with its windows down revealing four faces and eight black lenses, an upturned visor, a couple hats, ubiquitous shaggy hair, laughter and surety all around, looking almost as if even they can’t believe how great their lives are and always will be. A guy in a forest green Patagonia jacket will peddle past, his bike emitting a hard clink . . . clink . . . clink . . . every time the chain catches after a faulty rotation. Squirrels will dart together and apart and birds will hop and peck at dirt, worms, cigarette butts. The sun will start to set. A train will sound in the distance. Laughter, gaiety, silence. Late-night cigarettes and competitive complaining on the steps of RBD. Huddles and masses gathering, dispersing, gathering, dispersing in a synchronization of freedom and youthful exuberance. A guy and a girl will walk through the Quad in conversation, both filled with the desire to touch and be touched but the fear of too soon and not yet and what if, a future husband and wife, a one-day father and mother of three, Auburn Tigers yet born . . .

It’s some real idyllic shit. As a kid, I was obsessed with how everything was not I and how I was not everything. It always seemed unjust and trivial. Why am I me? Why are you you? Why can’t we be me? Or me we? I got that a lot at Auburn. Who are these people not me? I believe this is called narcissism.

But even I know Auburn’s beauty doesn’t belong to any one person. We—the student, resident, fan—only get to rent it for a short time. There’s that line: The more things change, the more they stay the same. This is Auburn. The more the buildings change, the more new faces appear each and every fall, the more Auburn keeps becoming Auburn. Auburn (and probably all colleges) is a place of unlimited stationary becoming. Our mascot should be the Buddha. 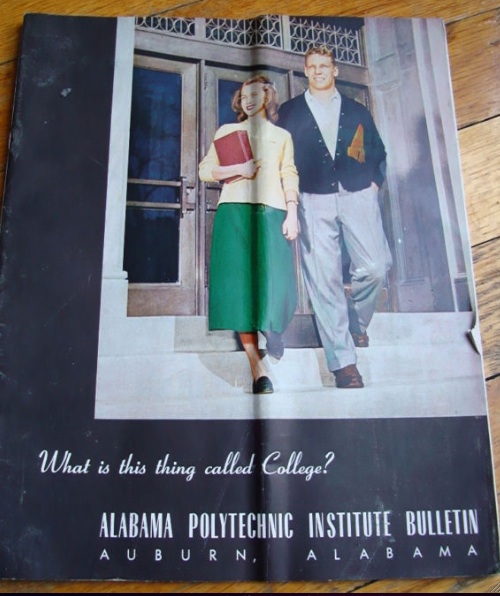 Auburn will keep trying to reach the ideal of Auburn forever. What is beautiful could always be more beautiful. Most of the changes are cosmetic. One wonders: Is the accepted idea of Auburn’s uniform beauty (e.g., the long paragraph above) a façade? Hmmmmm, goes the man alone in his room. Sure, it’s part gloss and glamour. PR plays a role. Auburn isn’t a group hug on Cater Lawn or a TV ad of multi-ethnic students reading the Creed. But then again Auburn doesn’t need much makeup; Auburn doesn’t have many blemishes. Donations and tuition increases keep the buildings and grounds fresh and clean. As a general rule of genetics, beautiful people beget beautiful people. The majority of the beautification and improvement projects are part of the grander uniformity, “the greater good.” There is beauty to burn at Auburn. That’s what I’m saying. It’s not all false. The squirrel population is thriving.

And so here’s something else I, and you and other alums no doubt, realized upon returning to Auburn: Auburn—Auburn’s beauty— is indifferent to you as an individual. Part of Auburn’s continual beautiful becoming is death. Not necessarily physical death. More typical is the death of graduation. The old must make way for the new. Picture Auburn as Hugh Hefner. Hef loves you when you’re young and bouncy. He’ll even marry you and let you stay in his mansion. But inevitably there’s always a younger, bouncier you waiting for the chance . . . to do whatever those women do with Hef . . . try to think of anything else.

I find Auburn’s indifferent beauty frustrating. I’m like everyone else. I think I’m important. In fact, I suspect I’m the most important person in the world. When I leave a place, I want to feel like the place misses me. I want my absence to be felt. I’m older now, and I get that places exist when I’m not there—closing my eyes doesn’t erase the world anymore—but I at least want to feel a little special. You know, maybe one gas station marquee with the words 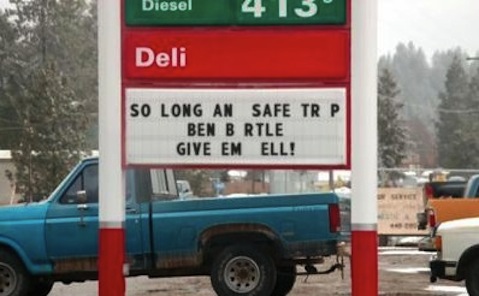 But I come back and not only did they not miss me, they appear to be having way more fun now that I’m gone. I want to feel like Cam Newton, if only for a day.

Auburn’s indifference is its final gift. It’s a nudge, a way of saying, Go on, git. It might be more a shove. Though I’d say some of us need that shove. I needed the shove. I still need the shove. I’ve just about decided I’m the sort who can’t do anything because he wants to do everything. Can’t choose because to choose limits choice. I’ve got the melancholy. I’ve got something like the blues. Smarter people might say it’s that old post-college ennui. Sure, it might just be. I drove around Auburn that other day and listened to Bob Dylan sing “Don’t Think Twice, It’s All Right” on repeat. I had my windows down. This is important in Auburn. You should always drive with your windows down. Go head and let yourself out and let some of what’s out in. Go head and feel like you’re part of something, even if you’re not. That’s a great song to say goodbye with, even if you’re not sure what you’re saying goodbye to.

Auburn is a car town. Attending Auburn leads to a lot of time in the car. Which isn’t all bad. Driving is great for the soul. To drive is to exist between time. Driving, movement, allows for the infinite choice of not yet—the anticipated cusp of forever arriving. We’re not there, and we’re not here. We’re pretty much nowhere. And there’s no better place than nowhere. Catholics cross themselves and call this purgatory.

I approach driving as a chance to look. Not to say I see. Look and see are no more the same than think and know. I think you’ve got to look a long time before you can see. But yet I look at the South. The South’s sad. I guess everywhere’s sad, if you look close enough, or if you can see it. But the South has a certain resigned quality to it. The South’s tragic, but it’s also comic. Maybe I should say the South is an absurd and yet sad place. Sometimes I can’t help but revel in this tragic, comic whatever. The wanderings, wonderings, and malaise of The Moviegoer’s Binx Bolling always made sense to me. Sometimes it’s just enough to sit there and know whatever it is you think you know. John Ashbery:

Even now the sun is dropping below the horizon; a few moments ago it was still light enough to read but now it is no more, the printed characters swarm over the page to create an impressionistic blur. Soon the page itself will be invisible. Yet one has no urge to get up and put on a light; it is enough to be sitting here, grateful for the reminder that yet another day has come and gone, and you have done nothing about it. 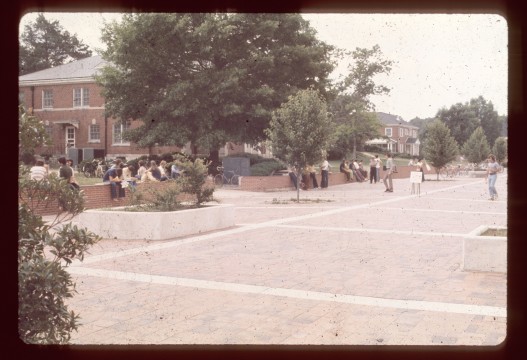 Writers talk about the writing of a book being a process of murder. They kill some part of themselves as they write. The book becomes the body. I’m trying to kill the Auburn in me. That’s what I’ve always been doing here. Picture the cicada on the tree. This is the forlorn husk clueless and clinging.

That way, when you return older and no wiser, maybe balder and fatter, and you drive down Gay Street past the Eagle’s Nest and Taco Bell, turning right onto East Thach, passing that laundromat, Momma G’s, and Payne Street, taking a right at the red light that splits Ross and Chewacla, first pausing to allow a man and his dog to cross, taking the moment’s break to look around and see the collective mishmash of the day wander past, oblivious to you and your eyes, unthinking, unworried about you and your worries, a sudden starting at the honk of the black 4Runner behind, rolling again, down Chewacla past the wooded sliver of Graham McTeer Park, moving still, 25-30 depending on flow and mood, now past houses of Auburn residents, a sprinkler tick-tick-ticking water onto already green grass, a misplaced sailboat grounded underneath the westward overhang of a house shaped something like a Native American longhouse, political signs stuck on lawns near the sidewalk, a small pink bike dropped near a magnolia tree, the rear wheel still spinning slowly, a gray-haired man stooping to pull weeds out of his flowerbed for the 35th summer running, sliding past all this to stop at the stop sign indicating Samford, taking the right, back toward campus, back toward the beginning, that way once all is said and said once more, that way when you return it’s part of a circle, returning being you moving ever within that circle’s circumference, so you see nothing but yourself again, and again and again.

And so I realize Auburn is beautiful. I was reminded the other day when I returned. It was early March. I was wearing a T-shirt. I believe it was black. The sky seemed to be blue. The sun appeared yellow. I saw a brown dog. I believe it was a big brown dog. 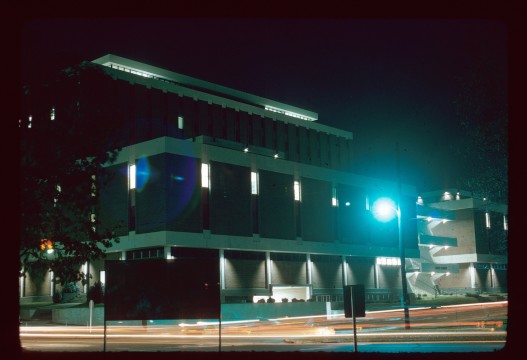 Ben Bartley graduated from Auburn in 2010. He currently lives in Montgomery. He can be reached and touched at [email protected]
…