Then she became a Diamond Doll.

“I met this crazy guy from my home town (Ft. Meyers, Fla.) and decided to marry him and my life took a serious right turn,” Page says.

Yes, a serious right turn that within a year had her not at a PR firm, but traveling with “the circus.” 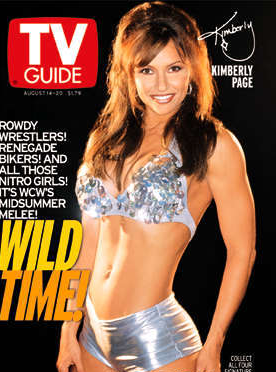 “I mean, that’s pretty much what it’s like when you enter the industry of professional wrestling,” Page says. “It’s on the road, playing all over the country and in Europe and Japan and all sorts of places like a traveling circus, but instead of elephants, lions, and zebras, it’s with 300 pound dudes with long hair,” dudes with names like Johnny B. Badd, Booty Man, and Diamond Dallas Page, her husband.

She made her first appearance as one of Page’s “Diamond Dolls” in 1991.

“It was typically just walking your guy out to the ring and cheering them on, maybe throw him some brass knuckles so he could win his match,” Page laughs. “After a few years, I began looking to expand my role a bit. I got the producer of our show to let me start a dance team, kind of like the Laker Girls of wrestling.”

The dance team was a hit. Page parlayed the success into an expanded role: DDP’s manager. She talked on camera. She improvised. After a couple of years, she was bitten by the bug.

“I wanted to settle down and focus on my craft as a professional actor. So I did that and worked in TV and film for a few years.”

There were some Playboy shoots. A few videos. Some Iron Man fitness stuff. A stunt role in 2003’s “Sea Biscuit.” A memorable wardrobe malfunction in the 2005’s “The 40 Year Old Virgin” (“They were looking for a busty actress who could do improv and there weren’t a lot of people around who fit that.”)

But five years ago, after divorcing from Diamond Dallas Page, Page decided she’d had enough of the circus. She wanted out. She moved to Utah. Her new job? Marketing, the Diamond Doll of public relations. Or something.

“Yeah, I kind of came full circle,” she says, “I’d been living in L.A. since 2002 and I was just kind of over L.A. and needed a change to improve the quality of my life.”

Part of that improvement of course includes coming back to Auburn, at least when she can. She was last here for last year’s Auburn-Florida game.

“Auburn didn’t play that great but at least we beat Florida,” she says. “I wanted to show my boyfriend what my college experience was like.”

Speaking of her college experience, we of course got her to tell us all about it.

So tell me about your college experience?

It was just such a great time for a social life for me. I studied really hard and graduated magna. You don’t do that without putting your nose in the books. I spent a lot of time in the library. But my typical MO was: Don’t go out on weeknights, don’t part on weeknights, stick to your studies. But Friday after the last class to Sunday afternoon was free time, with the exception of the end of the quarter. I had a lot of fun on the weekends. It was probably the most fun I’ve had in all my years because I would literally schedule time for fun. There wasn’t any fun in grad school. Getting out in the real world, you have fun when there’s time. But just having that experience in Auburn, and just being somewhat independent and having all of the privileges of adulthood but none of the responsibilities. I mean, don’t we wish we could all back there?

Did you go to football games?

Did I go to football games? Are you kidding? Yeah, I was at most of the games. It was absolutely amazing.

Do you have a favorite? Most memorable?

I wouldn’t say there’s a particular one that was my favorite. I remember going to Athens for my first Auburn-Georgia game and going over to Nashville with one of my suite mates who lived near Vanderbilt. Partying. Going to Baton Rouge. But all of the home games were all so amazing. I remember the first football game I ever went to, my eyes were as big as saucers. The energy was incredible. Sitting in the frat block was a hoot. I have so many great memories about the Auburn football experience. It’s unlike anything you’ll experience anywhere else.”

Auburn was in my two two schools of all the ones I looked at. I wanted to get out of (Florida) and try something new, meet some new people. So it was between Auburn and UNC-Chapel Hill and I just wound up being an Auburn Tiger and I couldn’t have been happier.

I had to live in the dorm my freshman year. I was in Dorm Five in the quad. I don’t know if they have air conditioning yet but they didn’t when I was there. The cockroaches were so enormous. Yeah, it was pretty funk. Needless to say I couldn’t wait to do get out of there. I pledged a sorority. Me and my suite mate who interestingly enough came up to Auburn with me from high school, she and I ended up in an apartment in Crossland Down on Wire Road.

So what was your typical Friday night?

Well, at the time, The (Hungry) Hunter was a great date night dinner spot. There weren’t a whole lot of places to go. I was blown away when I went back to Auburn this year and saw how much it had grown. We went to Denaro’s a lot. House parties. I dated half the Sigma house. I dated a lot of baseball players.

You were a Diamond Doll right?

A friend of mine who was in school here in the early ’90s told me he thought he remembered you and Diamond Dallas coming for Auburn games a lot.

Well, we were just going to see football games. I was a pretty recent graduate. It wasn’t for an event or anything. I think he got to go out on the field at one point or something. But we were in Atlanta and would just join friends and come see games. I mean, I was still an Auburn fan. I’m always going to be an Auburn fan.

It takes more than 200 hours each month to produce, edit, and maintain The War Eagle Reader. If you like what we do, and you’d like to help us keep doing it, please consider making a small donation or advertising with us (or buying a cheap T-shirt). Thanks!