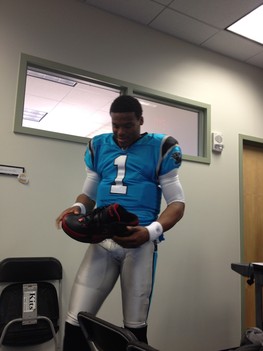 We keep wanting to work some sort of Luke 3:16 analogy thing into our report on the reports of Cam Newton’s most recent visit to ESPN, but whatever.

Point is that Shaquille O’Neal’s shoe, despite being the size of a Jet Ski, was apparently missing somewhere in the World Wide Leader’s offices. And the point is that Cam found it. He solved the mystery. Because he’s Cam.

He’ll probably even be able to find Shaq. 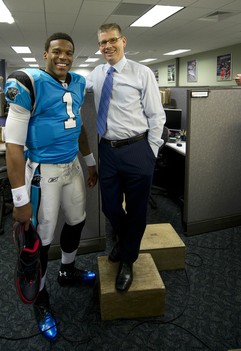 The Blessed Individual was in Bristol in full Panther gear Thursday to shoot a “This Is Sports Center” commercial.

If his record-setting swagga is any indication, this will likely be Sports Center for quite some time.

In December, ESPN The Magazine made Cam it’s NEXT issue It Boy.

Last week, he was named the AP’s Offensive Rookie of the Year.