1991 wasn’t the best of years for a young Auburn fan in the midst of a full-blown middle school husky phase. Our first losing season in a decade was in the works; a traitorous, sanction-loving moon was in the 7th field house. But while the quality of football Auburn had cultivated in the late 80s was waning, by God, the low-fat, low-calorie ground beef its meat scientists had developed during that same time had arrived, and what it may have lacked in taste it made up for in pride. 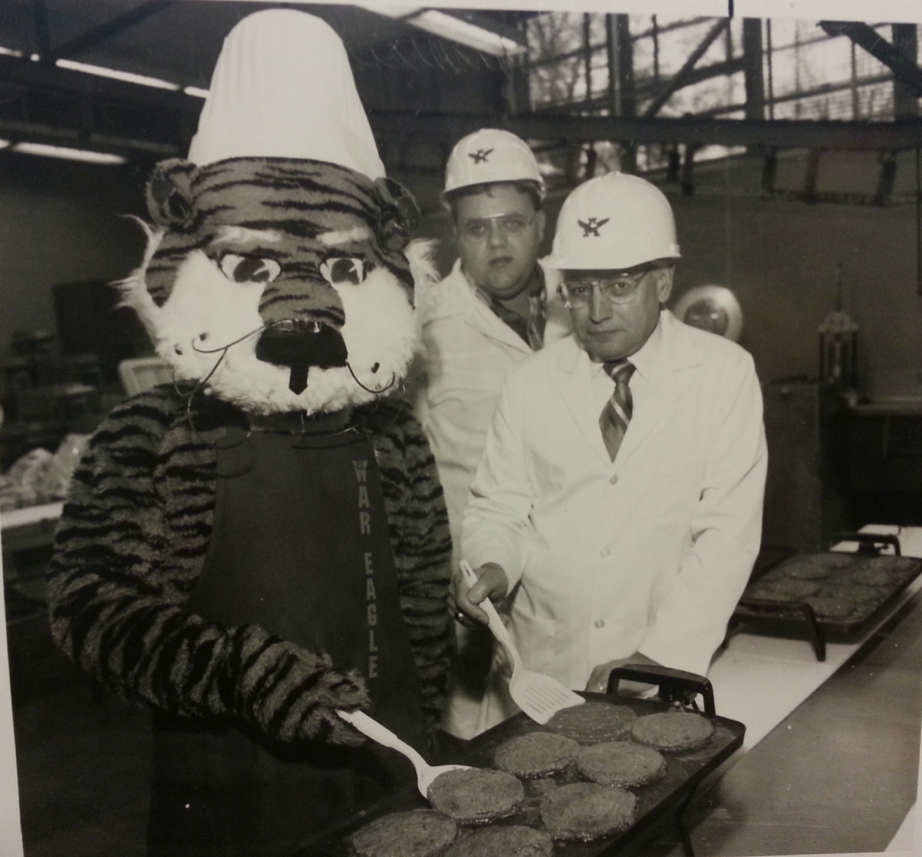 On Jan. 22, 1991, the McLean Deluxe was unveiled at the McDonald’s across from campus on Magnolia. The place was packed with VIPs, chief among them Auburn president Dr. James Martin, who along with Miss Auburn Debbie Hunter and SGA president Terry McCarthy and every one else on the “taste panel” gave the latest and greatest promise of healthy fast food a perfect “10.” 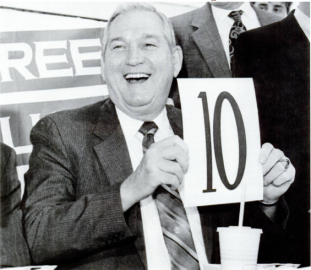 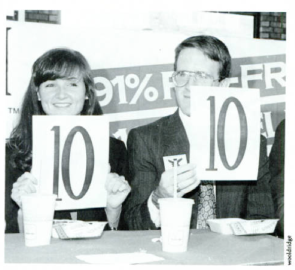 “This is a perfect example of a land-grand university working hand-in-hand with industry to solve some of the problems we face as a society,” Martin said. “We have become quite health conscious as individuals and this is a way in which individuals can watch their diet, watch the amount of fat consumed and the number of calories and still enjoy one of the great traditions of the American delicacy [sic?] which are hamburgers.”

The Plainsman called the McLean “… the burger that has made Auburn famous.” It featured an “AU Lean” patty, which contained only 9 percent of fat by weight. Regular burgers? About 20 percent.

But fat equals flavor. To trick your tongue, Auburn professor Dale Huffman pumped the meat with some seaweed and soybean derivatives (and some extra salt). And at first, folks seemed to dig it—at least the folks in Toledo, Portland (Ore.), Harrisburg (Pa.), and Knoxville… and of course Auburn. Auburn mayor Jan Dempsey even went so far as to proclaim Jan. 22, 1991 as “AU Lean Day.”

McDonald’s was so jacked by the results from its four McLean test markets (over 400 stores), they rushed the McLean’s production. According to industry insiders, the company usually spent years developing new products; the McPizza was supposedly at five years and counting at the time. But just four months later, the McLean Deluxe was on the menu of practically every McDonald’s restaurant across the country.

“It’s been extremely successful,” Huffman told The Plainsman. “This is the fastest they (McDonald’s) have ever moved a product through testing to full marketing. This is indicative of the level of interest and acceptance.”

And it was a high level. AU Lean was being sold on the retail market in New York. The National School Lunch Program ordered 250,000 pounds of the stuff to test on kids. Health magazines were calling. And Huffman said Wendy’s and Burger King had even gotten in touch.

Meanwhile, McDonald’s was touting the benefits of the miracle meat in full-page magazine and newspaper ads, and in multiple commercial campaigns. The McLean was named the official sandwich of the NBA.

But that may have been all he wanted.

Maybe it was the absence of the familiar flavor and “mouth feel” (the decreased fat apparently made it dryer than normal burgers), or the price (they were the most expensive item on the menu) or the two-minute wait (they had to be made to order). Whatever the reason, the McLean never McDid it for America. Billions and billions of them were not served. What The New York Times had initially heralded as “a healthy breakthrough for the American public” was soon being called the McFlopper. Johnny Carson made jokes. 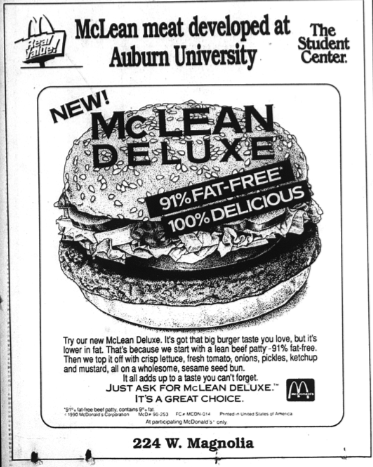 On April 21, 1993, just two years into what had been predicted to be a new era in fast-food, the Wall Street Journal wrote what was essentially the McLean’s obituary. Here’s how they ended it:

“At Auburn University these days, the meat researchers who pioneered lean beef are now trying to develop low-fat pork sausage. But don’t expect to see it on the menu at President Clinton’s McDonald’s anytime soon.”

I choose to remember the McLean Deluxe a little more fondly. We’d pull up to the drive-thru. I’d see one of the employees wearing a Bama 1992 national championship lanyard or something. And I’d order my McLean. Sure, we’re probably on the way to probation, I thought to myself. But we just might well cure America’s obesity epidemic before we get there. And hey, I’m losing weight. Leigh will totally start returning my calls. War Eagle.