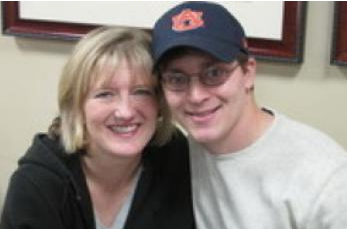 Twenty-three year old Clay Taber was nursed back to health last week, so to speak.

On Jan. 10, the recent Auburn grad underwent a much needed kidney transplant. His new kidney came from an unlikely source—his nurse.

Allison Batson, a nurse at Emory University Hospital in Atlanta stationed on Taber’s floor, grew close to Taber and his family during his year long treatment for an autoimmune disorder that often leads to renal failure. Now she’s even closer. When Taber’s mother was told she didn’t qualify as a donor and therefore couldn’t give her son a kidey, Batson offered hers.

“The whole world was his, with the exception of this incredibly rare illness that hit him out of the blue,” Batson said in a press release. “Something inside me said I needed to do more.”

A photo of the unlikely donor / recipient duo—with Taber wearing an Auburn hat—was featured on the Huffington Post and other national news sites this morning.

The Columbus, Ga. resident is getting married June 9.

“I told [Batson] she’s going to get a special dance at the wedding,” Taber told MSNBC. “She can pick out the song.”