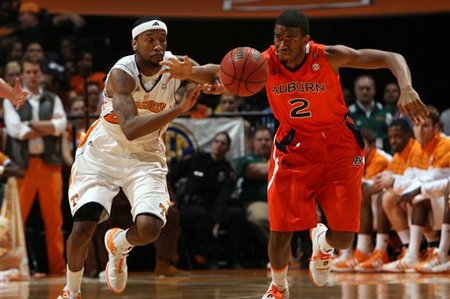 Part of me looks forward to being old. I told my friend Chris this. I told him this sitting at a long table in Knoxville’s mall foodcourt. He wanted Chinese. It’d been on the “tip of his tongue” all week. It was Saturday. Groups of teenage girls and families of four and high school couples pass by, participating in that ceaseless parade of seeing and being seen—the mirror of public life that reminds each of us of the shape of self and other. We sat at that table and watched fleshy skeletons eat Taco Bell and Sbarro. I admit I’m not normal. No hiding that. But yet I find Walmarts and malls to be America’s mass graves. They make me feel icky in ways I find difficult to describe.

Of course it’s quite possible all that’s in part a fault of the weather (East Tennessee in January is especially gloomy), or it could be a product of no longer ingesting six fish oil pills per day. (I’m told Omega-3 fatty acids are good for mental health.) Either way.

I told Chris I look forward to being old because old people have perspective.

I’m not sure it is. And I’m not sure old people have perspective. I read somewhere that every person, no matter the age, has an “ideal age,” which is the age they picture themselves. All evidence could indicate a person is 85 and, physically anyway, pretty freaking gross. But that person, that pretty freaking gross old man of 85, pictures himself as 25.

But to continue being boorish. This guy named Donald Hall. This Donald Hall, he wrote a short essay for the New Yorker about perspective. It was about being old and watching “squirrels—tree rats with the agility of point guards” steal seed from birds. But it’s about perspective, I decided. Donald Hall was America’s Poet Laureate in 2006. He’s 83. He spends his summer looking out the window of his childhood home in New Hampshire and watching Red Sox games. Poets are people too.

Decades followed each other—thirty was terrifying, forty I never noticed because I was drunk, fifty was best with a total change of life, sixty extended the bliss of fifty—and then came my cancers, Jane’s death, and over the years I traveled to another universe.

Maybe the word I was looking for is detachment. This Donald Hall guy wrote eight words to describe a decade, and he was drunk for seven of them. Maybe old people have a certain detachment from life I find appealing. Old people are all, I’m rubber, you’re glue, everything you say and do bounces off me and sticks to you. That’s what old people are.

Old people are also all, Honey, I’ve got blood in my urine again.

I tell you all this because after Chris and I sat at that table in the mall foodcourt we went and watched my and your beloved Auburn Tigers lose to the Tennessee Volunteers in Thompson-Boiling Arena. Not that I was expecting Auburn to win. Sure, it’d been nice. I wanted Auburn to win. But Auburn basketball post-Cliff Ellis (and his alleged system of cash money benefits) has taught detachment.

I’m comfortable with detachment. I don’t always like being detached, but detachment and me have reached one of those détentes. “The only way I know to exist within a group is to alienate myself from it.” This guy named David Shields wrote that in this book called Black Planet. More about Black Planet in a minute.

Groups make me uncomfortable. I never raised my hands when the mic man said, “Raise your hands for Two Bits.” (Partly because Two Bits sucks.) I often give false names at functions requiring nametags. I’m suspicious of the necessity of the National Anthem at sporting events. I usually keep several sections between the athletes and myself.

But for the AU-UT game Saturday I sat courtside. Like the first row. The row where Jack Nicholson and bored, pretty women sit at NBA games. I didn’t have a camera, but I took this picture with my phone. 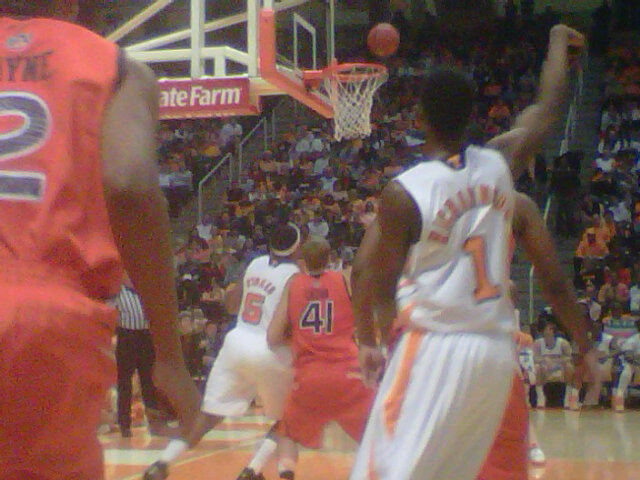 So you see I’m not totally full of it. I don’t have courtside connections. But my dad does. He got the tickets from a local bank owner. The tickets also came with access to the Ray Mears’ Room. Ray Mears was the man who deemed East Tennessee “Big Orange Country,” and his room was full of free food and rich white people. It was something like Southern Baptist Heaven.

Courtside detachment has a face. Two faces actually. And they’re both angry and connected to squat man bodies with biceps like beach balls. Most of the event security personnel at SEC sporting events look like normal people, just some guy or girl who needed a job. Not these guys. These guys had ended lives, probably while somewhere in the “hot” portion of “the Middle [blanking] East.” Or so Chris and I decided. We decided the two of them combined had killed between 6 and 10 people. “But they didn’t consider them people,” Chris said. “They only really killed one man who was worthy.” I laughed. A large portion of our shared humor involves inventing elaborate and perverse backstories for people we don’t know.

Another instance of our shared humor involves a play on the typical Knoxville sports talk show listener. (Substitute Knoxville with Auburn, Tuscaloosa, Athens, Gainesville, et. all.) “Jimmy,” Chris will say, “Jimmy, Coach Dooley, he just, he just needs to get these PLAYERS into shape. Jimmy, these PLAYERS, they just ain’t got no discipline. I’ll hang up and listen to your answer. Go Vols, Jimmy.” Special emphasis is given to the word PLAYERS, because that word is a placeholder for a far different word.

It would be impossible to overstate the degree to which sports-talk radio is shadowed by the homosexual panic implicit in the fact that it consists almost entirely of a bunch of out-of-shape white men sitting around talking about black men’s buff bodies.

That’s from Black Planet. David Shields, author of the more recent Reality Hunger, spent the 1994-95 NBA season following the Seattle SuperSonics for the book, which is subtitled “Facing Race During an NBA Season.” It’s an honest exploration of a middle-aged white intellectual observing himself care much too much about the actions and outcomes of young black males. As such it is often embarrassing and painful to read.

I will say this about race and the modern SEC athlete: I don’t know what to say. The subject is too big, the moving parts too many. I don’t want to say it’s too soon. Can it be too soon? To talk about such things as they should be talked about? I don’t know. I just know such topics and considerations are outside the abilities of this particular person and this particular column. I’m not Harper Lee; this isn’t To Kill a Mockingbird.

It’s not futile to try. I wouldn’t say it’s futile to attempt nearly anything. 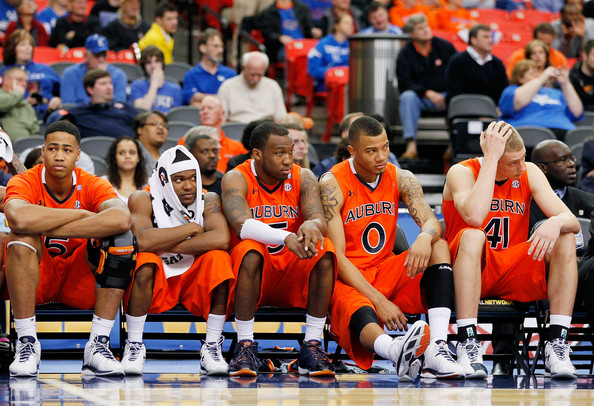 Auburn basketball is refreshingly futile. I mean, aren’t we all tired of this striving toward “victory?” Right? Right! Winning is so tiresome. Anyone can be a winner. It’s not that hard. But to be a loser, to really and truly fail, well, that’s something that takes effort. I don’t know much. I’m dumb and selfish and tired. Mainly, I’m pre-maturely tired. But I love losers. I think I might be a loser. And I love nothing more than I love myself.

No one learns anything from winning. Winning just justifies. Look at America post-World War II. Everything we do is great . . . because we did it. Millionaire presidential hopefuls call this American Exceptionalism, which is a corollary of Manifest Destiny, which is another way of saying, “We’re better than you . . . because we’re better than you.”

Auburn basketball will win again some day. We shouldn’t be too worried. While we wait, we should focus on “losing with dignity.” Which is a term winners use to keep us born losers in check—a sort of sly word warfare. You got to watch out for words. They’re tricky. Stop paying attention for a day, a decade, a century or two and they (you know, them) will have you chained in place with nothing but words. Duty, honor, sacrifice, the greater good, the silent majority. You got to check yourself before some balding alcoholic plutocrat from Kansas convinces the country dropping bombs on little brown boogey men is the only way we can be free. And, of course, then we’ve wrecked ourselves.

I’m saying give me a loser, a true blue loser. There’s beauty in striving. What else can we do, but strive? I don’t want to get too dour, but, but yet, but all this, your reflection in the mirror, your car, your house, your favorite hat, will be gone in a cosmic blink. Don’t let that depress you. You know this. We all know this. It’s boring to type. But yet.

But yet type it I did.

Writing about sports. Uggh. Is there anything less conducive to interesting, cliché-free language than sports? I’m sick of myself already. I can’t even imagine how tired you are. I can barely keep my eyes open.

So should we celebrate futility? I don’t know if celebrate is the right word. We should accept futility, because it’s our default condition. We should fight futility, because anything less leads to fetal position sadness. We should strive toward what seems to be the sun, even if we know our stupid wax wings will stupidly melt and send us spinning toward the stupid puke brown ground.

Forget everything I said earlier. We shouldn’t be detached.

Jeronne Maymon won’t always have 19 rebounds. Frankie Sullivan won’t always shoot 2-12 from the field. Auburn will one day score more than 49 points and shoot better than 30 percent on the road.

“We are what we are offensively, so that’s not surprising,” said Tony Barbee.

Which made me think of these lines from Vonnegut’s Slapstick:

I addressed his scribes directly, speaking over his head. “History is merely a list of surprises,” I said. “It can only prepare us to be surprised yet again. Please write that down.”