Fear of a Toomer’s apocalypse is nothing new. In 1978, folks worried that downtown renovations would Updyke the tradition of rolling Toomer’s Corner to extinction (they’re taking away our power lines. What are we going to roll, the oaks or something?) So folks started having fun while the funnin’ was good. They rolled cops. And they got on each others’ shoulders. 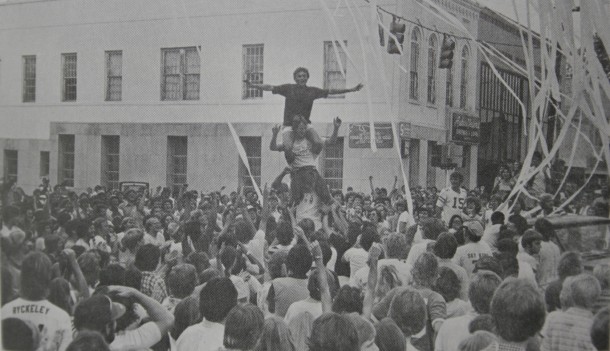 *Sure, technically not a pyramid, but what are we supposed to call it? And maybe they were working on a pyramid.

* War Eagle Moment at the SAG Awards
* Twisted Metal developer is an Auburn fan
* TWER interviews Paul Finebaum about Bo Jackson’s Heisman campaign
* “My wife was the Auburn Tiger.”
* Dr. Dre’s Auburn hat
* Bo and Me
* Coeds. Watermelons. 1973.
* Muhammad Al on the Haley Center concourse
* Playboy in Auburn, 1989
* Who’s the kid with the Auburn shirt in “Return of Swamp Thing”?