Cox Media Group’s 97.3 The Zone might not be able to get Paul Finebaum away from WJOX, but they are trying something different in sports talk radio in Birmingham, with an Auburn alum sharing the helm.

Rachel Baribeau, Class of 2003, joins Kevin Scarbinsky of the Birmingham News for four hours of sports talk starting at 2 p.m.  They call themselves “Baribeau & Scarbo.”  (It rhymes.  Some might Southernize the pronunciation of her name to rhyme with “caribou,” but the former is the preferred pronunciation.)

First, a little background. When Cox revamped the station to a sports format last year, company reps made a conditional offer to Finebaum, according to the Birmingham Business Journal.  And Finebaum’s attorneys went to court to try to get him released from his contract with Citadel Broadcasting, which was recently purchased by Cumulus Media.

For the first few months, The Zone ran a rerun of the morning show “Rick & Bubba” in the 2 to 6 p.m. time slot.  It appeared that the station was keeping the slot open for Finebaum, should he be released from his contract with Citadel/Cumulus, which runs until 2013. 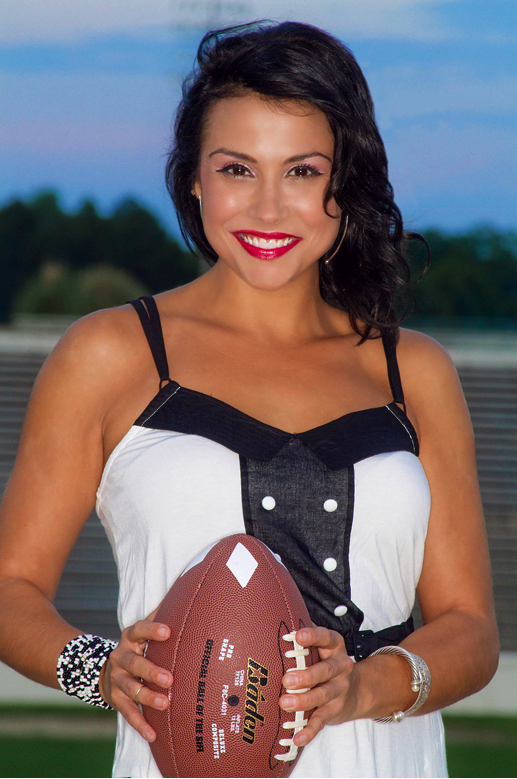 But the emergence of Baribeau and Scarbo would indicate that, for at least the short term, The Zone is going in a different direction.

According to Baribeau, the show is also going in a different direction.  “We are more interview-driven,” she said.  “It is a true sports talk program.”  Translation: No trash talk, no cast of characters, and no rumors.  In fact, The Zone, in its promos, proclaims, “Sports radio. Not trash radio.”

“Kevin Scarbinsky has been a journalist for 27 years,” she said.  “We double-check sources, we get statements from them.”

(Disclaimer: My listening experience for The Zone comprises less than an hour online, to get a sense of the content.  Reviews in comments would be appreciated.)

John Olsen, program director for The Zone, noted that the afternoon show, like the morning show with Eli Gold and Stan White (radio game announcers for Alabama and Auburn, respectively), stresses inside information.

“Eli and Stan have Coach Saban’s and Coach Chizik’s numbers on their cell phones,” Olsen said of the morning show.  In the afternoon, “We have the people who write the blogs and the articles.  These aren’t guys who go from home to station and tell you what they read in the paper that day.  They wrote it.”

Baribeau expressed a “large distaste for negative content.”  She pointed proudly to the show’s “Pay It Forward” segment on Fridays at 5 p.m., which presents positive stories such as Eric LeGrand, the paralyzed Rutgers football player; former Alabama football player John Croyle, who runs Big Oak Ranch, a Christian home for children; and former Auburn player Steven Wallace, who runs a foundation that reaches out to underprivileged children.

For Baribeau, the radio show is the latest challenge.  After graduating from Auburn, where the RTVF major worked for Eagle Eye News and the baseball team, she spent her first five years in a variety of media gigs in Columbus, Ga., including sports talk, Friday night sideline reporting and local broadcast freelancing.

In 2008, she went to work for the Tuscaloosa News, as a multimedia producer for the newspaper’s TideSports site.  (Talk about paying your dues.)  In 2011, she joined FoxSports and Scout.com as a field reporter covering the SEC West and recruiting.  The Baribeau and Scarbo opportunity emerged in late November.

She is encouraged by the initial response to the program.  “The feedback has been tremendous,” she said.  “People appreciate a choice, an alternative.”  The program is also broadcast in Montgomery on 107.5 The Ticket.

Olsen added, “They have developed a pretty quick chemistry.  It’s a good alternative for sports fans in the area.”

So what is the long-term prognosis for the program?  A medium like radio can be unforgiving and unstable.  Olsen is pleased with the content and the feedback so far, at the same time admitting that others above him make the decisions for the program’s future. 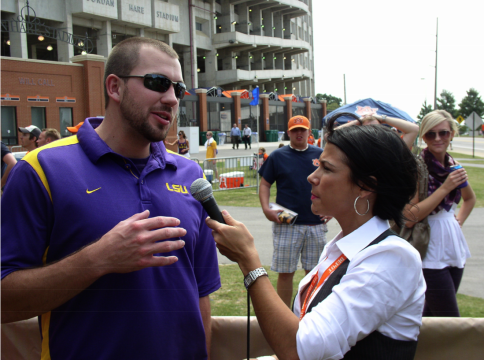 Baribeau has been in broadcasting long enough to know the same, but she says, “I appreciate the commitment by Cox Media to do this, and we are doing the best we can.”

Still, Cox Media obviously feels that the Birmingham market can serve as the headquarters for two sports talk shows.  Baribeau and Scarbo have tried to set themselves apart with a show that is heavier on the information and lighter on the inter-caller drama.

The brief time that I listened included an MLK Day-based discussion of the “Rooney Rule” (which encourages minority hiring in the NFL), with a sports attorney as the guest.

It’s an extension of Baribeau’s personality.  She is open about her Christian faith, and it’s reflected in her attitude and her approach, though not overtly on the program.

How that plays in the rough and tumble of sports talk radio is yet to be determined, of course.  Here is hoping she doesn’t catch the ill treatment fans wish they could heap on Tim Tebow.

Fans wanting to judge for themselves can check out 97.3 in Birmingham and 107.5 in Montgomery, or can stream theshow at 973thezone.com.  The “Listen” button is at the top.

John Carvalho, associate professor of journalism at Auburn, blogs about the sports media at johncarvalhoau.tumblr.com. (He had nothing to do with this story’s headline.) Find him on Twitter at @johncarvalhoau. Read his previous columns here.