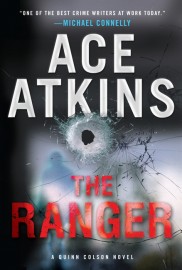 The literary kudos for crime / mystery writer and former Auburn football player Ace Atkins have been piling on as of late.

Last May, he was tapped to continue writing the best-selling Spencer detective novels (as in Spencer for Hire) created by the late Robert B. Parker. Most of Parker’s fans seemed down with it. Some didn’t — an owner of a New York mystery bookstore told the Wall Street Journal that “Ace Atkins is a terrific writer, but he’s not Robert B. Parker.” Legend has it that’s exactly what Danny Wuerffel said before Atkins killed him with a karate chop.

Yesterday, al.com reported (see how easy it is!) that his latest book “The Ranger” received an Edgar Allan Poe Award nomination—yesterday would have been Poe’s 203rd birthday—for “Best Novel” from the Mystery Writers of America. It’s about an Army Ranger whose hometown has become a meth lab. Hello, vigilante justice!

He’ll find out if it won on April 26 in New York City. Here he is talking about it back in June.