Thanks to new technology, Auburn University is going even greener.

The university’s Waste Reduction and Recycling Department has recently placed BigBelly Solar intelligent waste and recycling collection systems at several spots on campus. The units are divided into separate containers—a recycling receptacle on one side, a trash compactor on the other.

In theory, the solar-powered compactors will help the university significantly increase its resource efficiency (fewer bags, less labor, and less gas). The new Solar BigBellys can be found outside the Auburn’s student center and surrounding areas that receive heavy pedestrian traffic. 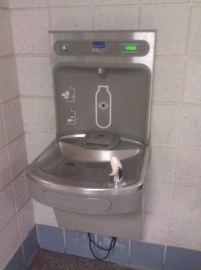 Almost as Back To The Future II as “intelligent waste” systems are the “Hydration Stations” found on the second and third floors of the Ralph Brown Draughon Library, at the student center, and other campus buildings.  Powered by a motion sensor easily activated with one hand, these high tech water fountains dispense filtered water into a student’s existing plastic bottle. Even cooler? They feature a digital display that calculates the number of bottles saved according to ounces of water dispensed. The combined numbers from all units can add up to thousands of water bottles saved each week.

You can learn more about recycling efforts on campus by visiting the Auburn University Waste Reduction and Recycling Department’s website.