In the first installment (which we found and posted back in March), we had the wonderful introduction to Auburn’s season recap by the demon Gorgar (1:14), Layer Tillman’s incredible touchdown snag against Georgia Tech (3:34), a topless Tracy Rocker (3:57), and the general revelation that no one in Birmingham talked the 80s talk (with their hands) or walked the 80s walk like Bruce Cunningham, THE Bruce Cunningham.

Part 3 confirms that nothing will ever soothe the pain of Van Tiffin’s kick in the crotch. But at least the gut-wrenchability of Auburn’s last-second loss contributed to a slow motion art film recap of an Iron Bowl sound-tracked by Phil Collin’s “In The Air Tonight” (in which the station “took a great deal of pride.”)

But the best thing about WBRC’s Iron Bowl preview is undoubtedly Michael Jones’ stone-faced (but just as leathered) featurette in the second video on the “insult merchandise” available at the new Riverchase Galleria, such as:

Bama’s version of the “My Two Favorite Teams” bumper sticker… 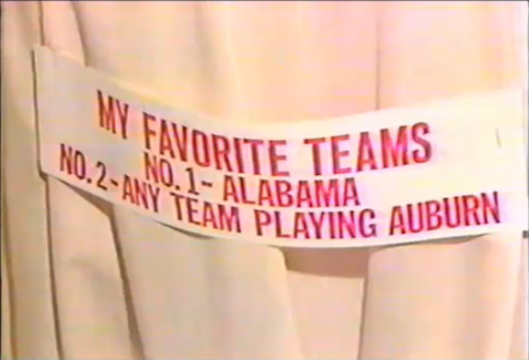 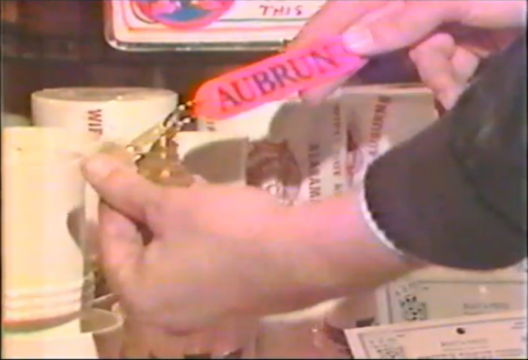 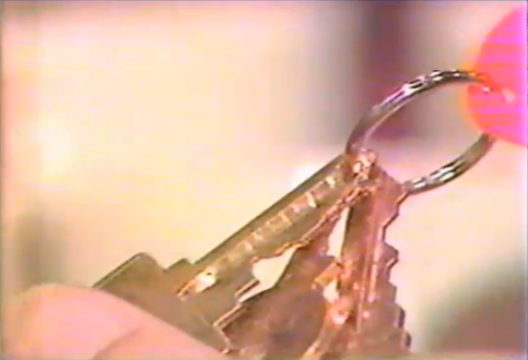 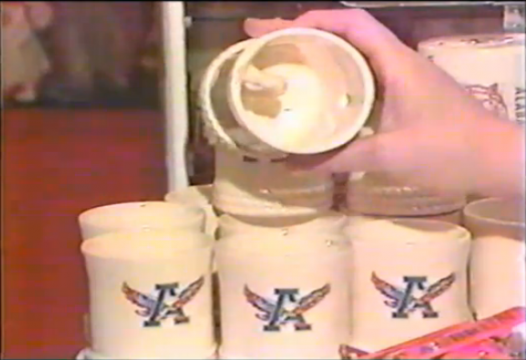 And Got Two? Hesiman caps… 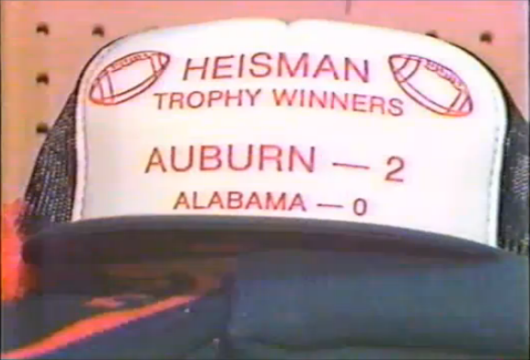 But Jones saves the best for last: “a calendar that no Auburn fan should be without.” 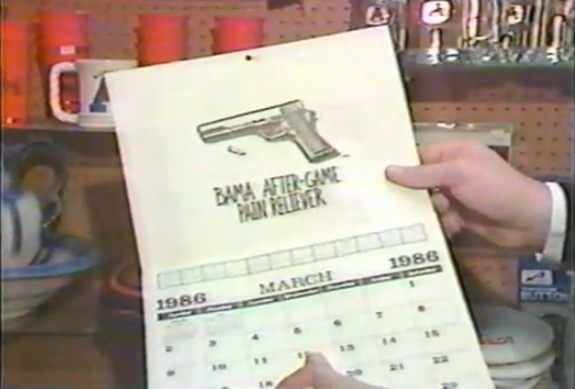 There’s obviously no way this would fly in the state’s current post-poisoning, politically correct culture. But it’s hard to pinpoint exactly what year —’95? ’97?—this sort of thing became inappropriate, even for the Iron Bowl insult merchandise market (Harvey would probably know). There’s part of me that would almost like to think there are dudes still making and hawking this particular brand of boo-yah somewhere outside ol’ Legion Field. Speaking of, the second video also gives us former Birmingham mayor Richard Arrington and former University of Alabama president Joab Thomas bemoaning the Iron Bowl’s potential (and eventual) transition to a home and home series. And oh yes — Jones’ stoic analysis of Auburn-Alabama jokes (7:57), delivered as if he’s looking for a little after-game pain reliever of his own: “The good thing about those jokes is while they aren’t always funny, they are interchangeable.”

I was always more of a Channel 13 man, but WBRC owned the ’86 Iron Bowl, which is the first Auburn-Alabama game I remember watching as intently as I watch Iron Bowls today, and with equal emotional investment.

I may have even had that calendar.