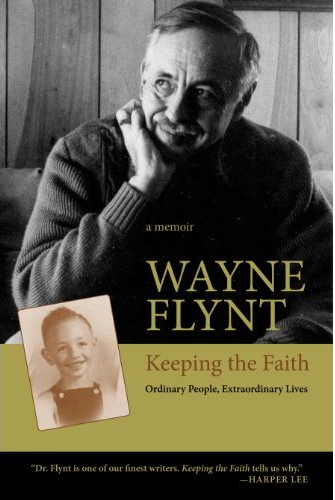 Dr. Wayne Flynt has been known for many years as “The Conscience of Alabama.” His pastor, James Evans, recently used that description, lending it an even greater air of dignity. Reading Flynt’s new memoir “Keeping the Faith: Ordinary People, Extraordinary Lives” gives the nickname profound layers of meaning and demonstrates a long career of service.

Flynt is an emeritus professor of history at Auburn. To be concerned with the happenings in Alabama in the second half of the 20th century is to encounter at least his name, if not the man.

Educated at Howard College (now Samford University) and Florida State University, Flynt was a well-respected teacher and scholar at Samford before accepting a job at Auburn in 1977. His 28-year career in the Auburn history department coincided with the most tumultuous times in recent memory on the plains. For the Auburn Family the sections of his memoir dealing with those episodes are worth examination.

But Flynt is a masterful storyteller. His memoir is his 12th book – two of which have been nominated for Pulitzer Prizes – in addition to the rest of a prolific publishing career. This effort will be appreciated by students of history and the South generally, along with others who enjoy an introspective examination of topics like religion, Civil Rights, education, poverty and politics. Flynt has lived, worked or spoken out in great detail about all of these topics and more throughout his distinguished career.

For those with even a passing familiarity of life in rural, but growing areas in the post-war South, his tales will bring back many memories. Flynt’s father was a salesman, and they moved constantly to towns across the region, with Pinson and Anniston being prominent settings. His parents’ influence and religious upbringing contribute to the themes of justice, decency and equity that are present throughout his stories of the pulpit, the classroom and high stakes meetings that helped shape modern Alabama.

The book is not simply Flynt’s life, but is full of context. Dr. George Petrie appears in the book, not just as the founder of Auburn’s history department, or the author of the Auburn Creed.

“George Petrie organized and coached the first Auburn football team in 1892,” is historical fact, but historians give you context and emotion. Flynt is an excellent historian, and he’ll share with you the why:

To Petrie, scientific football offered southern men a chance to assert their masculinity and the South’s physical supremacy short of actually taking up arms. It brought southern society in tune with northern innovation. (pg. 125)

No book that mentions Auburn can go long without discussing the athletic culture. Flynt describes himself as a fan of people performing amazing feats, even if they don’t always get As in the classroom. He’s been a longtime face in the crowd at Auburn athletics, cheering the athletes while criticizing those in charge when necessary. The first example came early in his time at Auburn and involved board of trustee member Ralph “Shug” Jordan and Gov. Fob James, foreshadowing many of the turbulent events to come in later years.

These are important tales for those who love Auburn, and they figure prominently in this memoir, but the narrative reads more as an attempt at earnest documentation rather than an author out to settle scores. It isn’t all about football and trustees, either: Flynt reminiscences about teaching 6,000 students over his career; he points with pride to their careers and he details his previous books, some of which have become benchmarks of southern culture.

Flynt has often found himself in a position where people and organizations ask for his considered opinion on various topics important to the state. Here he carefully details the indirect results of those instances, like his work in education reform, time spent with organizations that ultimately led to Voices for Alabama’s Children, the group which releases the annual Kids Count report, and speeches to Jefferson County pediatricians which inspired many of the specialists to devote more time to poor children.

Focusing on children became the easiest way to obtain a hearing for the poor … If I could not change the minds of my audiences about tax justice, child welfare, and decent schools for poor children, as least I intended to educate them about the inequities. (pg. 231)

For his ground-level view from the center of many critical turning points in the state in the last 30 years Wayne Flynt’s memoir is worth reading.

But you’ve probably read this far to see what Flynt says the power struggles at Auburn. That starts in Chapter 12, which he’s titled In the Eye of the Storm.

Here again Flynt delves deep into Auburn’s long history to establish the setting. A lot of talk over the years, dating back to President Isaac T. Tichenor (1872-1881) has centered on the mission of Auburn University. Flynt — noting that Auburn has a unique history as a Methodist school that taught the classics before the Morrill Act created the land grant institution — almost distills decades of dispute to the mutual identities as an institution with an agricultural and mechanical mission and as an institution of the classics and other liberal arts. Flynt, the history professor in the College of Liberal Arts, acknowledges in his memoir the role and need for both, while portraying board of trustee member Bobby Lowder as a nearly exclusive supporter of the former.

From such divides Flynt recalls the pesky matters with the the SACS investigation and subsequent probation, the NCAA and, of course, coaching changes. Lowder, who wanted Auburn to aspire to be like Clemson, is of course the central figure:

(H)is mission was to deemphasize liberal arts, strengthen professional schools, and win an NCAA football championship at any cost.

Trustee meddling in internal academic standards paralleled the trend of admitting skilled football players. Putting the best interpretation possible on the position taken by Lowder and other football-crazed trustees, the issue was democratic access for even the most marginally qualified applicants, regardless of athletic participation. Those of us who were more cynical concluded that the heart of the struggle involved finding ways around NCAA rules and our attempts to improve what were, by other research university standards, Auburn’s low admission requirements. (pgs. 295-296)

Much of what took place in the power struggles between board members, university presidents, supporters and faculty was well documented in the media, the Auburn alumni magazine and other forums. Flynt offers an overview of that coverage and, further, gives his first-person insight as a prominent faculty member.

The faculty-board battles were long and protracted, spanning several generations of students on the Auburn campus and Flynt proved himself a prophet at a Role Commission meeting in 1999 when he argued before trustees and administrators, “No matter who ‘wins’ such a battle, the ‘loser’ will be Auburn University.”

Finally, when he works his way to 2009, there are two paragraphs that you imagine Flynt took great pleasure in writing, beginning:

In addition to a new board and president, Lowder also entered a new life cycle in 2009. Reckless and questionable Colonial BancGroup policies triggered bank failure and criminal investigations … Colonial’s collapse was the sixth-largest bank failure in American history. Months earlier, new leadership at Colonial had shown Lowder the door. Many CEO’s have taken down one large institution, but few have nearly destroyed two. Lowder enters rarified corporate history. (pg. 382)

Read for yourself his final conclusion on Bobby Lowder.

Flynt had retired by then, leaving faculty concerns behind in 2005. Through it all he remains complimentary of his time and most of the people of his time at Auburn – indeed, the Flynts still live in the community. The last chapter of the memoir is about other people and other places, and terrific pieces of folklore. It concludes with his assertion that he doesn’t need victory in his lifetime, but only the “fidelity to those beliefs that define me as a person.”

“Keeping the Faith: Ordinary People, Extraordinary Lives” was published in September, 2011 by The University of Alabama Press.

Disclosures: Dr. Flynt taught at Auburn while I was an undergraduate there, but I took my history classes from one of his talented colleagues. I was heavily involved at The Auburn Plainsman and WEGL during some of the most tumultuous of those years, but to my recollection, only wrote one piece concerning the issue for the paper and didn’t discuss too much of it on the air; it didn’t fit the format of our show.

I teach journalism at Samford, where Flynt both studied and was a history professor long before my time there. One of his sons is my colleague at Samford. Wayne Flynt and I have only briefly met a few times in passing.

The publisher shipped the memoir to The War Eagle Reader. Jeremy asked me to consider it for a review. Having known Flynt through his media appearances over the years I was interested in the subject and found it a worthy read.