No hype: A tornado passed over my house.

I live on Green Street.  The tornado’s path – which apparently began west of campus along Wire Road, continued over campus near the president’s mansion and traveled over Auburn High School – buzzed my house after gashing Terrace Acres Drive.

I wasn’t here.  I was at campus when it all began around noon.  In Tichenor Hall, we had seen the tornado watch, had heard the sirens and had turned on WSFA.  When they projected a tornado would hit Auburn within four minutes, we moved to the basement and encouraged every student we saw to do the same.

As I walked past the front door, I noticed a sheet of rain and the doors swinging open on their own (a constant theme, you’ll notice).  In the basement, we sat in the student lounge and watched the Weather Channel for only a couple of minutes, until the lights went out.  Even then, the accounts of damage began to surface.

By 12:20, the worst had passed, and I was hungry, so I walked to the Student Center to see how The Auburn Plainsman staff was doing.  By the time I got there, a tweet re-tweeted by TWER read, “Just in: Green St. in Auburn, Terrace Acres, an apartment complex has bad damage- near Wrightsville Rd. Emergency crews responding.”  So I grabbed my umbrella and headed out as staff members shouted words of encouragement toward me.

As I drove slowly down Samford, I first noted that the police had blocked off Dean Road, though I did not know about the damage at Auburn High yet.  I continued on, but could not turn at Green Street; it was blocked off too.  The police officer would not even look at the drivers license I was waving frantically.

I peeled off on Blake and turned right on University Avenue.  Elkins was not blocked, so I was able to turn there.  I could tell that trees were missing, and I didn’t know how much damage lay ahead, so I parked my car and walked.  It was when I turned and looked over the yards toward my house and could not see the large Bradford pear tree that I knew something had happened, so I ran.

I was blessed.  My house is up on an incline and the Bradford pear below it had fallen sideways – partially blocking the driveway, but no biggie.  I ran in the house to check on the dogs; they were OK but glad to see me.  I noticed that one was in a chair in the computer room, which was usually closed.   I realized that the storm had probably caused the door to swing open.

At that point, I did what a lot of people were doing.  I went outside and started walking around, stunned.  Our next-door neighbor, Dan Crowdus, had been home for lunch when the tornado hit.  It took out their back porch (so much for that renovation project) and broke a front window.  The pole where their power plugged in was bent so badly that Alabama Power could not hook them back up Wednesday night.  The tornado also picked up their trampoline and deposited it in the street about four houses away.

Dan said the whole house started shaking.  He mentioned it when I showed him my porch, where one column has shifted about six inches at the bottom.  He said it felt like the house was being lifted, and I’m thinking the same thing happened on my front porch.

As I walked toward Elkins Street, I saw several houses with significant roof damage.  The house at the corner of Elkins and Green, damaged in a fire caused by an RV a few years ago, had a tree go through the opposite side of the house.

Rich and Kirsten Perkins live next door.  Their house had caught on fire at the same time, and now trees had fallen into their roof.  I asked Rich, a local radio personality, if they were going for the trifecta after fire and tornado.  “Locusts?” he asked.  Earthquake, maybe, I suggested.

Peggy Kirby across the street had also had a tree fall into her house.  From Auburn High School to Terrace Acres to my house to their houses is pretty much a northeasterly straight line.  She too was sitting in front of her house on a milk carton, stunned.

As I walked, neighbors like Rich from next door the other side, former neighbors like John Person, and even folks I didn’t know where neighbors like Glenn Puckett, our veterinarian, just stopped to make sure everything was OK.

I even saw friends from the media.  Chris Anthony and Vasha Hunt of the Opelika-Auburn News, who accompanied me and some students when they participated in media training for Fort Benning soldiers, were deployed to the street this time.  Joel Ericson, the new Auburn Beat writer for the Ledger-Enquirer, was also wandering the street doing interviews.  I was able to hook him up with Dan Crowdus, whose story made the L-E’s tornado article.

Al Jordan, of the best tree service in Auburn, also stopped by.  He does our trees every year.  This spring, he wrapped a belt around the Bradford pear, which had split at its trunk (as they often do) to keep it up until February.  He called from time to time, after thunderstorms, to see if the tree had survived.  He stopped by himself to see that it hadn’t.

I have not been up Terrace Acres Drive yet.  I did stop and look up the street.  It looked like a dead end leading to a forest.  To go further would risk arrest – that’s another reason I haven’t gone up there.  The street has long been known for its tall, mature trees.  We all fear what it looks like now – and which way those trees fell.

After I returned from one of my wanderings, a truck pulled up and two men jumped out, one with a chainsaw.  They started cutting my fallen tree and clearing it away from the driveway.  I urged them to stop, since my convenience was minor.  They stopped only when they were finished, though they were later joined by two more men, one of whom also had a chainsaw.  I do know one of the men was Jeff Stewart and I believe he lives on Eagle Circle.  I hope so, because this is my attempt to publicly thank him.

The power came back on fairly early – no later than 3 p.m., and life is trying to make the switch away from disaster and in the direction of normal, though it will take a while for some.  Watching the news (live broadcast from up the street), Elizabeth White noted that sponsor signs from the Auburn High School baseball field were in our neighborhood.

That sent me out to the street in front of the house.  I thought that “Jim Parker Building Company” sign that lay there was from a neighbor’s home improvement project.  Nope.  It was from the AHS outfield.

This morning, we can see a whole lot more of the sky from Green Street, which is a mixed blessing.  But we can also see each other.  And we can hear the chainsaws and the trucks.  Day One on the long road back to normal. 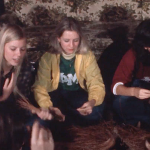