The two decades-old marble eagles at Toomer’s Corner will soon be sent to a marble specialist Washington D.C. for cleaning and refurbishing, according to a member of the crew working tonight to remove the statues from atop the pillars at the main entrance to the Auburn University campus.

The beak of the statue on West Magnolia side of the entrance was knocked off, or possibly simply fell off, at some point over the weekend of Auburn’s season-opening football game against Utah State on Sept. 3. Since that time, the right wing of the other statue was also damaged. 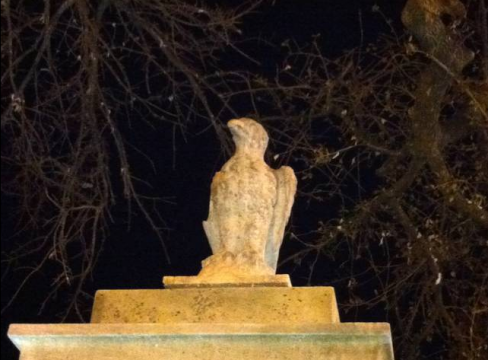 The Lathan Company, a historic preservation company based in Mobile, is overseeing the restoration.

“The beak… was sent to D.C. in advance to match colors,” a spokesperson for the Lathan Company said.

The crates used to ship the statues were designed by students from Auburn’s school of Building Science.

According to a member of the work crew, the repairs should take “a few weeks.”