After a week in which almost the entire SEC slept through games with Big South teams, it is THAT week again.  It is similar to the feeling of walking around a corner and walking headlong into a bonfire:  Ah, yes—it’s Bama week.  We can feel the warmth.  Rub your hands over the fire and let it warm you.

A few small reminders to fan the flames within you as we prepare for a visit from the second place team in the SEC’s Western Division:

1.  If you haven’t caught it yet, or haven’t seen it since it first came out, go and watch “Roll Tide – War Eagle” again on ESPN—they’re running it many times on many channels this week.  See and hear the arrogance again.  Feel the anger.  Know the enemy.

2.  Remember the music played in Bryant-Denny Stadium last season.  We won’t be as classless in Auburn on Saturday (for example, playing “Sharp Dressed Man” would be appropriate) because we are better than that.  Just remember the lengths that they went to last year to try and intimidate Cam Newton and throw him off his game.  And why did they do that?  Because they were afraid.  They knew very clearly what he was capable of doing to their team.  Their nervous energy pushed them to classless heights beyond the classless heights we already thought them capable of.  It also pushed them to a 24-0 lead.  We all know what happened next.

3.  This is a chance for the Auburn Family to experience extreme Schadenfreude.  To pull the rug out from under Alabama as they prepare to stroll into the National Championship game despite not even winning their own division of their own conference?  To prevent a rematch and save America from weeks of “Game of the Century” re-hype?  What a great public service the Tigers can perform on Saturday.  And what a great feeling we can all experience if it happens.

4.  Walk by Toomer’s Corner and remember those trees and what happened there.  Was it the work of a sane person?  No.  But it was the work of an Alabama fan.  And the trees… the trees remember…

But this game is also about Auburn and a chance to take a season that has seen some disappointments and turn it into a great and memorable season.  To stand toe to toe with one of the best college football teams in America right now and beat them would be a huge milestone for Auburn.  (Auburn’s day is coming, whether it wins this game or not—after this season Auburn will have as much or more talent than Alabama and will not be in this position again.)

What are the keys for Auburn?

1.  Stop the run.  Doing so sounds insane given Auburn’s porous defensive performance against Samford last week.  If Auburn has some good run stopping schemes it has kept them well-hidden.  But if Trent Richardson has a huge day, it’s hard to imagine Auburn winning, so the key is simple:  Keep Richardson in check, the way the Tigers kept Ingram under control the last two years.  In two games against Auburn Richardson has carried the ball 25 times for 75 yards.  It can be done.  Auburn will have to bring extra players to the line of scrimmage—maybe even go with five linemen and two linebackers—but it must be done.  If McCarron throws the ball around and beats us, he beats us, but that has to be the direction we go.

Remember: Auburn plays better on defense against the pro-style running teams than against the spread-us-out passing teams.  So we’re saying there’s a chance…

2.  Score points.  Somehow.  No kidding right?  But it won’t be easy.  Not at all.  Auburn must find a way to move the ball and score points against a defense as fast and talented as LSU’s.  Insane as it sounds, we actually have some confidence in Auburn’s offense against Alabama’s defense.  No, Auburn won’t score forty points, but Gus Malzahn has been setting this game up all season.   Bama has watched every Auburn play hundreds of times and when they see certain formations they will react, knowing what is coming…and Malzahn will make the formation result in a different play: one that takes advantage of what he thinks the defense will line up in.  Moseley will have to manage the game and make very few mistakes.  Dyer, McCalebb, Lutzenkirchen and Blake will have to do just enough.

3.  Be Special.  Auburn’s clear advantage is on special teams.  (Hey Coach Saban—have you found a kicker yet?  No?)  When Auburn kicks off, it gets a touchback 25% of the time.  Bama gets a touchback 3% of the time.  Auburn needs to make plays on special teams to have a chance in the game.  Auburn can use its advantages here to control field position and pin Alabama deep, forcing them to go the length of the field on drives.

4.  Outcoach ‘em!  Auburn has a coaching advantage.  In his last two “huge, must win games,” both of which his team was favored in, Nick Saban lost and directly contributed to the loss with foolish decisions.  (But the media will never say it.)  Hey—having Julio Jones return the second half kickoff last year when Alabama was winning 24-7 was brilliant coaching.  Jones got hurt, Auburn didn’t have to worry about the fact that it couldn’t cover him anymore and the Tigers won the game.  Nice job, Mr. Composure. 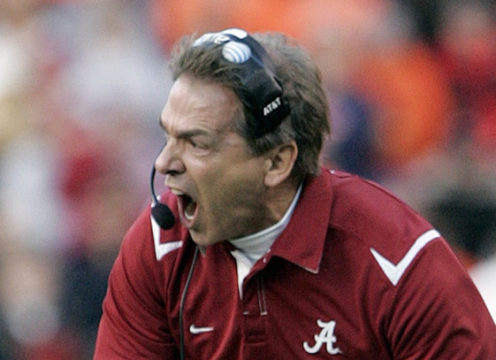 Keep up the good work.

5.  Bama isn’t road tested.   The road schedule for Alabama was so soft this year that the team will not be prepared for playing in a truly loud and hostile environment.  The Tide offense hasn’t had to face that—and it will be a problem for them.  Auburn fans need to bring it Saturday and help cause problems for Mr. McCarron, whose toughest road test has been against the worst Florida team in thirty years.

No Power Rankings this week, and indeed this is a rather abbreviated edition of the Wishbone.  It’s Thanksgiving and we’re simply too full of turkey.  We’ll be back to being too full of Auburn by Saturday.  Meanwhile, here’s a shout out to the turkeys in Tuscaloosa who’ll be making their way to the Loveliest Village this weekend, if they’re not there already.  Just a friendly warning, folks—keep that red toilet paper stowed away in your elephant-covered RVs and don’t get anywhere near Toomer’s Corner after the game.  You can’t spend 364 days a year making fun of celebratory tree-rolling (and one of you spent one day poisoning said trees) and then roll them yourself on the 365th day.  It doesn’t work that way.

Of course, if all goes well, we won’t have to worry about that.

Related: The Iron Bowl according to “Big Fish”