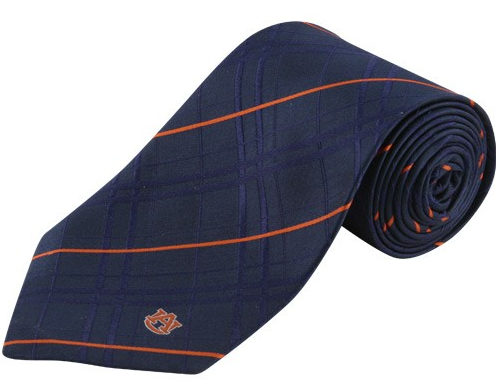 Perhaps like you, I embarked on a shopping frenzy this January after Auburn won the national championship. I bought a Michael Dyer jersey, which is my gameday attire (or as my mom puts it, “formal wear.”) I bought a t-shirt commemorating our season. I bought a cap (which unfortunately doesn’t fit my enormous head.) And, I bought a snappy Auburn tie. It’s a deep blue number slashed with orange diagonal stripes, a plaid pattern between them of the same blue but picked out in a subtly different stitching, and a tasteful postage-stamp Auburn logo right at the end. It’s a classy tie – my wife loves it. And it has nudged me into a standard uniform for Fridays: khakis, white shirt with thin blue horizontal and vertical lines*, and the tie.

I’m not really a superstitious man. I’ve never had a pregame ritual, I always wash my socks, and even if I took the notion to grow a probability-altering beard, the wife wouldn’t stand for it. (If my facial hair holds that sway over Auburn’s success on the football field, well, sorry fellas. You ain’t near as pretty.) Spooky things happen, sure, but for me it’s purely retrospective. But here’s the thing with this year and the tie: I haven’t exactly worn it consistently. I forgot to wear it pre-game on September 16 and 23, and October 7. Those dates would correspond to the Clemson, Arkansas and FAU games, our only two losses and a loss-in-everything-but-points. That’s a strong correlation between Auburn football and…

… and a necktie? When we look at superstitions and rituals as a phenomenon (especially associated with sports,) the situations most burdened by superstition are those in which, statistically speaking, the players and fans have the least amount of actual control over those events. That is to say, people seem to put the most faith in their superstitions when they matter the least. And that makes sense. The natural impulse is to search for even the haziest connection, to make even the sparest attributions in order to assign some cause for a team’s success or defeat. I know this. In reality, the existence of a superstition mostly serves as an indicator that the cause of a team’s struggles are too large or too complex or too far out of reach to be acted upon by the players and fans.

Especially the fans. Maybe this is the feeling we’re all getting from Auburn’s 2011 season, with 2010 glowing brightly in recent memory and our current tigers struggling to execute.

It’s hard. By this time last year, the Auburn tigers carried an aura not necessarily of invincibility but of certainty. They would take their licks, but they always hit back harder. Twenty-four points down to a jacked-up Bama beneath the roar of an even more jacked-up Bryant-Denny and its houndstooth mob? Never looked back once that field goal unit trotted onto the field. Shut ’em up. Made it into history. The 2011 tigers are anything but certain, even when the receivers are open, when the D-line is getting a push, when the right play is dialed up, when our QB finds the open man, hurls it to him as he blazes from hash to hash. What happens when the ball hits his hands, when the safety’s shoulder pads crack againt him?

We don’t know, just can’t foresee. But that’s the point: uncertainty. There’s no beauty in myth without mystery, no possibility of heroism without a chance of defeat. 2010 was almost mathematical, in that we knew however deep the line on the graph dropped, it was always going to pop back into the positive. It was the mind-blowing conclusion of a story that had already been written, historic in every sense of the word. 2011 is a story that is being written before our eyes.

There, in the struggle, is a joyous narrative. Our hopes laid bare in a season of triumph through struggle. A preamble of coming seasons. Ground fertile for new heroes. This is the same ground Jason Campbell stood on when, in 2004, a first down on a deep cross sparked our rally versus LSU. The same ground under Bill Newton’s cleats as he sprinted toward two blocked punts and hundreds of thousands of bumper stickers. This is our earth to be worked and harvested.

Dare I wear the tie, knowing fate? You’re damn right I am.

* Looks like graph paper. How am I supposed to resist?